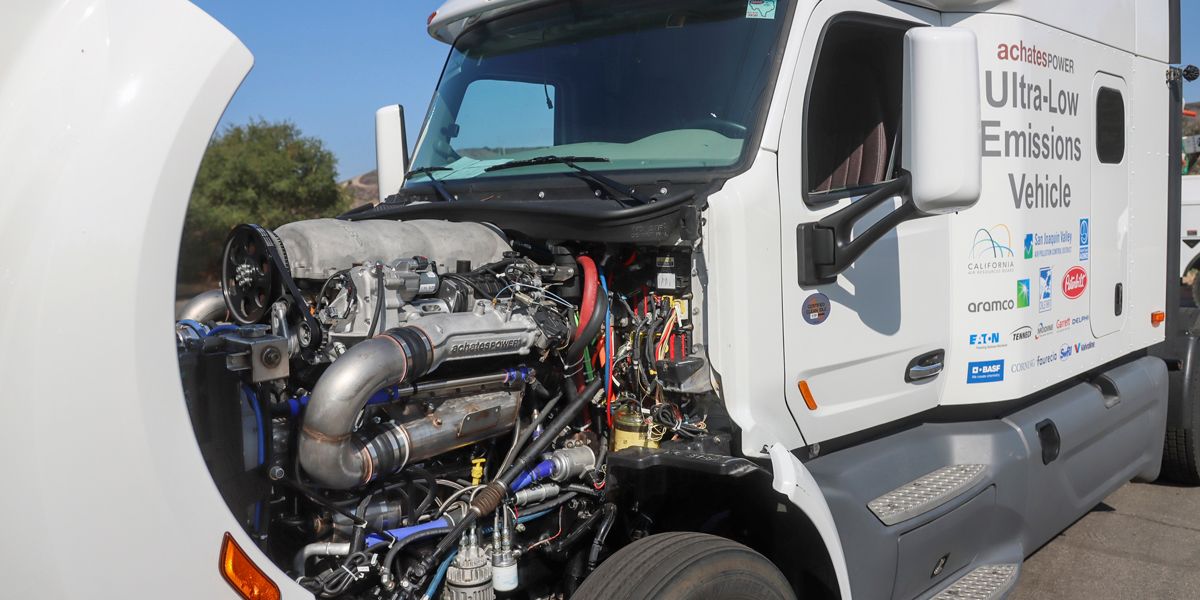 Achates Power’s cleaner, more powerful diesel engine, developed through a project funded by the California Air Resources Board and several partners, entered fleet service with Walmart in a Peterbilt 579 tractor.

The diesel engine meets CARB 2027 regulations which impose a 90% reduction in nitrogen oxide emissions compared to the standards in force.

The project team demonstrated that the engine, known as a high-efficiency opposed-piston diesel engine, reduces carbon dioxide by 10%. Achates Power’s ultra-low NOx engine is designed to achieve superior fuel efficiency due to its reduced heat loss, improved combustion and reduced pumping losses, according to the company.

“It is particularly remarkable that we have been able to achieve the extremely stringent NOx limits without any additional emission control devices, reducing the cost, complexity and compliance risk of ultra-low NOx powertrain solutions,” said Dave Crompton, President and CEO of Achates Power.

Opposed piston engine technology has been touted for years as a possible alternative to conventional engine designs. In 2014 Achates first thought that opposed-piston diesels were about five years old.

“Reducing heavy-duty vehicle emissions is key to cleaning the air,” said Wayne Nastri, general manager of the South Coast Air Quality Management District. “This kind of innovative, cleaner engine design is what we need not just here locally on the South Coast, but across the country to protect communities nationwide suffering from the pollution associated with the movement of goods. “

The opposed piston engine can utilize existing manufacturing facilities, processes and materials to enable rapid time to market and deployment. It also uses existing components and supply chains. It should cost less than current engines, even if it meets much stricter environmental regulations. It requires no additional emission control devices and has fewer parts than conventional engines.

Achates Power performs additional testing with a fully aged catalyst (the equivalent of 800,000 miles of operation) to demonstrate its continued ability to meet stringent CARB standards.