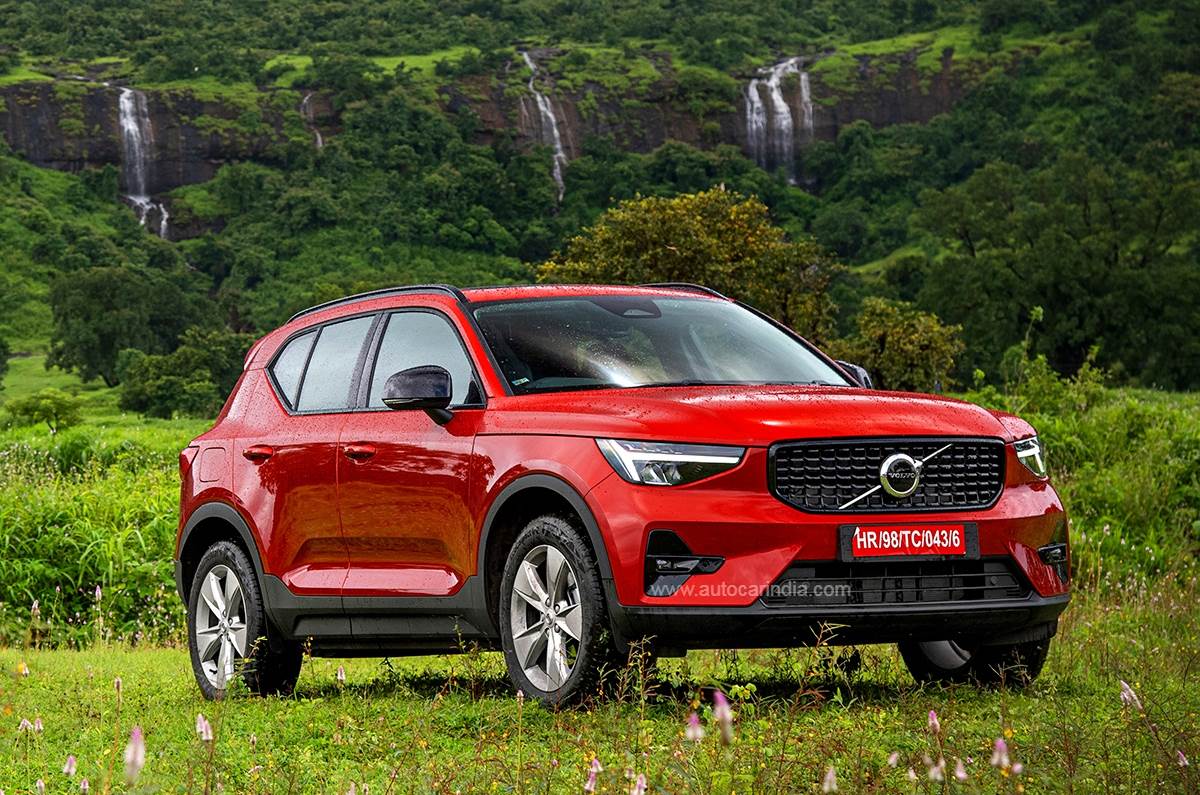 Volvo’s entry-level offering in India is getting a boost, albeit an incremental one. We tell you how it is.

Volvo has just launched the XC40 facelift in India at Rs 43.20 lakh (limited time). This mid-life update brought a new mild-hybrid powertrain and updated styling, among other changes. We take it out for a spin and tell you what the Volvo XC40 facelift looks like.

Volvo has given the XC40 a sharper look this time around, with more angular headlights that retain the ‘Thor’s Hammer’ LED daytime running lights and a new bumper with gloss black finished triangular fog light housings. The rest of the elements remain unchanged at the front, so it continues to have a large glossy black grille with the Volvo logo in chrome and the clamshell bonnet design.

The XC40 facelift gets a new front bumper and the headlights are now more angular.

On the side, the XC40 facelift gained a new design for the alloy wheels. However, the five-spoke silver alloys look fairly plain compared to the pre-facelift car’s diamond-cut two-tone design. Volvo also opted to ditch the two-tone paint scheme, with the roof now in body color. Interestingly though, the XC40 facelift gets black mirrors and roof rails. 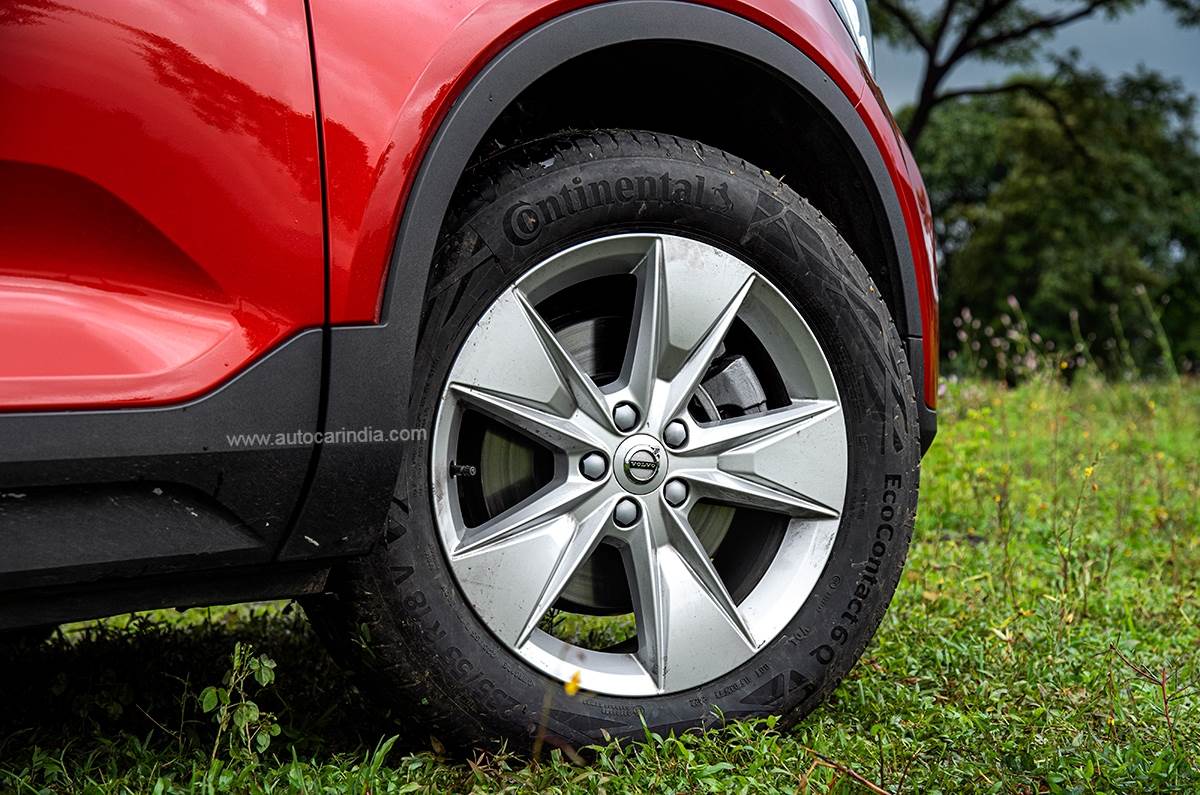 The new design of the 18-inch alloys looks quite simple.

Changes to the rear are very minimal and will take a keen eye to notice. Gone is the tailgate’s T4 badge and comes the new B4 badge, signifying its powertrain. The other minor change is that the rear skid plate is now finished in black, instead of silver on the older model.

Overall, this can be categorized as a subtle update instead of a full facelift. While the sharper design keeps it up-to-date with new rivals, we can’t help but think the sporty, outgoing R-Design variant looked much better as an overall package.

Just like the exterior, the interior of the XC40 receives only minor changes. The cabin has a minimalist design and is made of high-quality materials, as you would expect from a Volvo. The XC40 facelift features a new open-pore wood inlay on the dash and door cards, which helps to enhance the ambience and gloss black detailing around the air vents, touchscreen and center console look neat. The car we tested comes with an all-black interior theme, but buyers can opt for a beige theme as well. 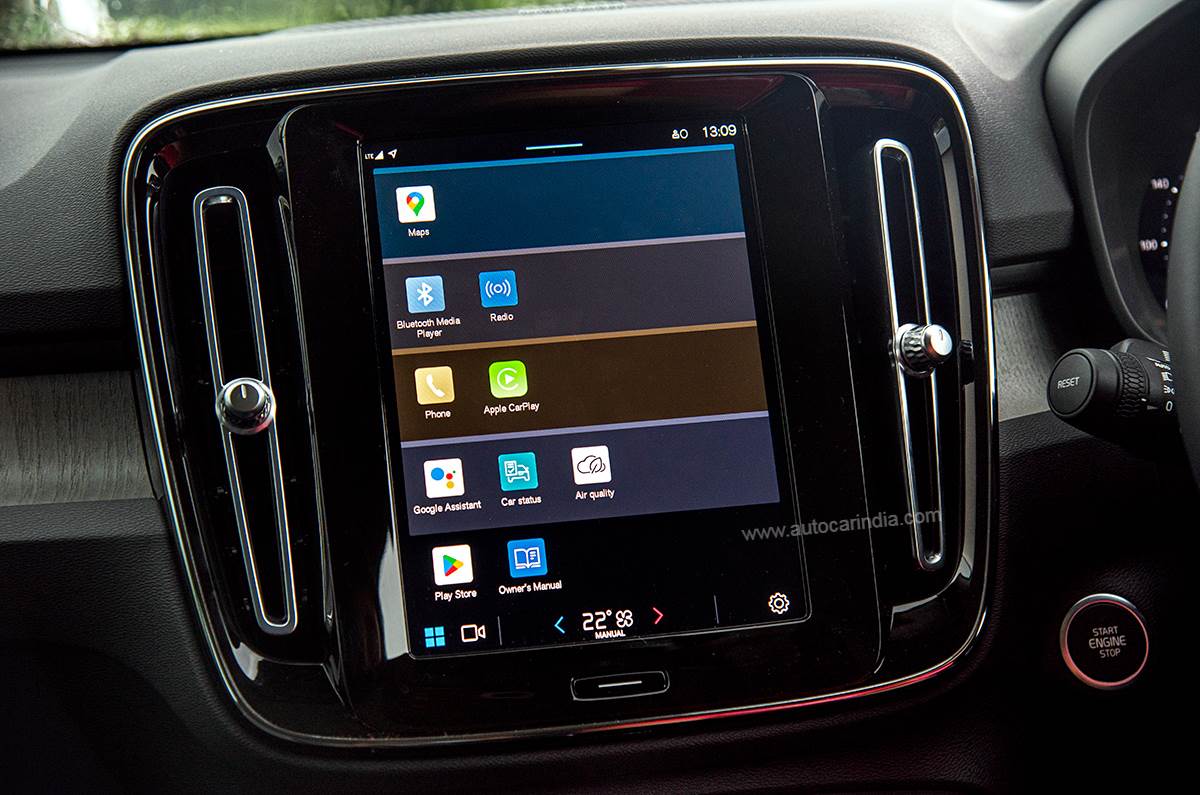 The 9-inch touchscreen is now powered by an Android-based system.

The chunky leather-wrapped steering wheel is unchanged from the previous model, which isn’t a bad thing, but surprisingly it lacks the paddle shifters. Meanwhile, the 9-inch portrait-oriented touchscreen now uses an Android-based system and integrates Google services. The infotainment system is smooth in operation, but it can get confusing and take a while to figure out. 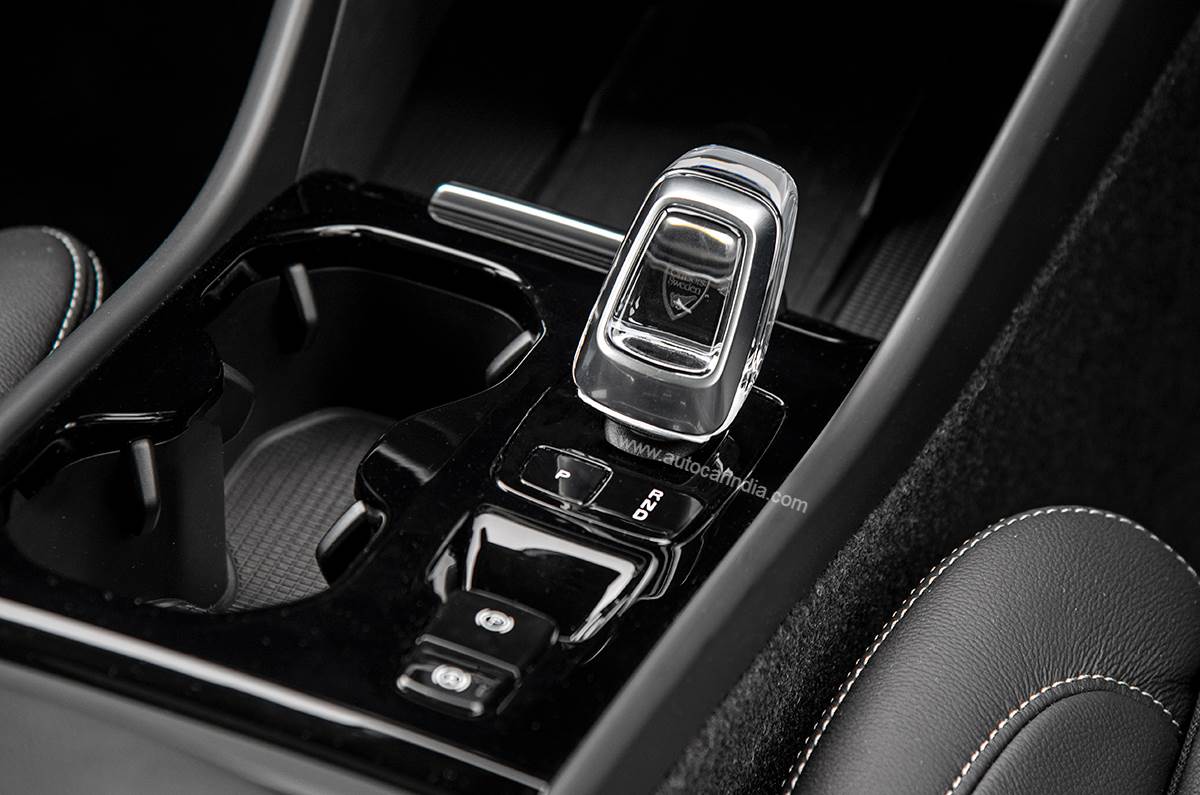 Also, the HVAC controls are still located on the touchscreen, and while they’re easy to find, they’re just not as convenient as the physical buttons. Volvo also took the opportunity to update the graphics on the 12.3-inch digital instrument cluster, and the only other noticeable change inside is the new crystal shifter.

The front seats are excellent in terms of support and cushioning and offer plenty of power adjustment. The driver’s seat also benefits from a memory function, but it lacks heated and ventilated seats, which would have been nice. 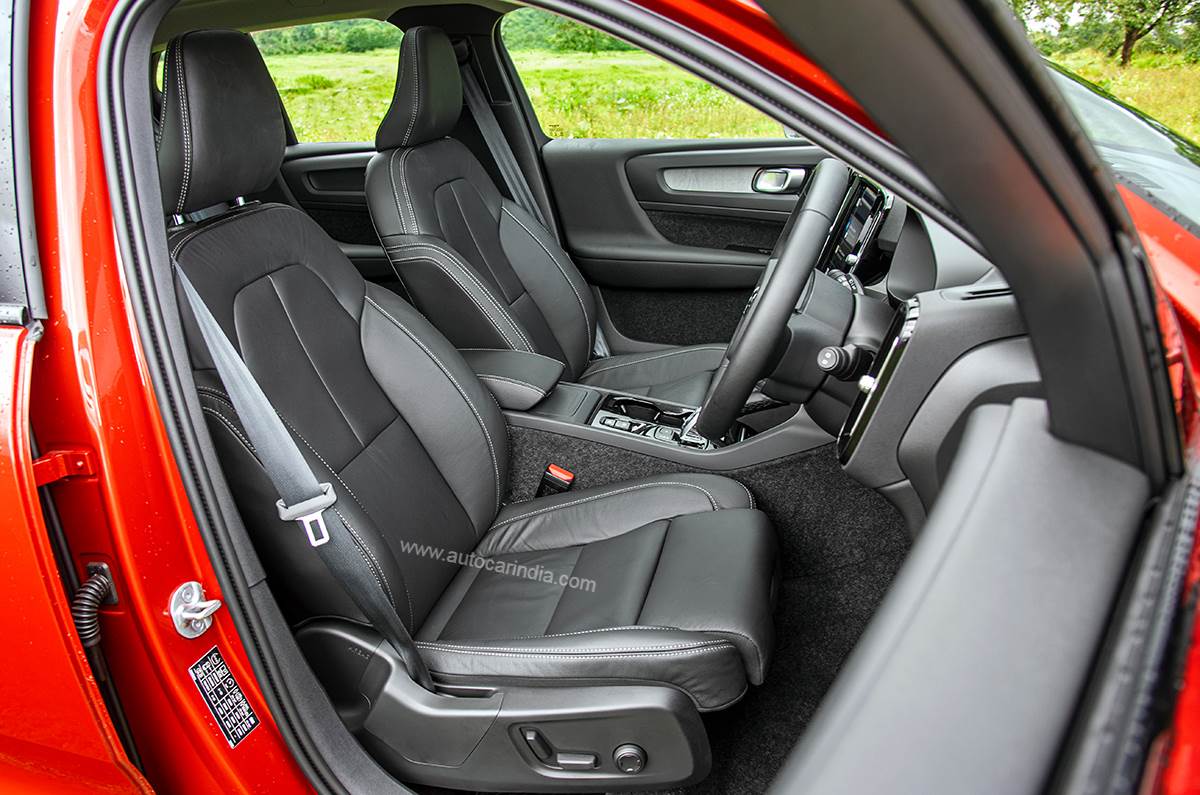 The front seats are comfortable and supportive; there are also plenty of tweaks on offer.

In the back, there’s plenty of space and the seats are comfortable too, but the backrest is a little too upright. The all-black theme can also make you feel hemmed in, but the large panoramic sunroof does a lot to mitigate that. Plus, the XC40’s trunk has a flat floor and can easily gobble up luggage for a weekend getaway. 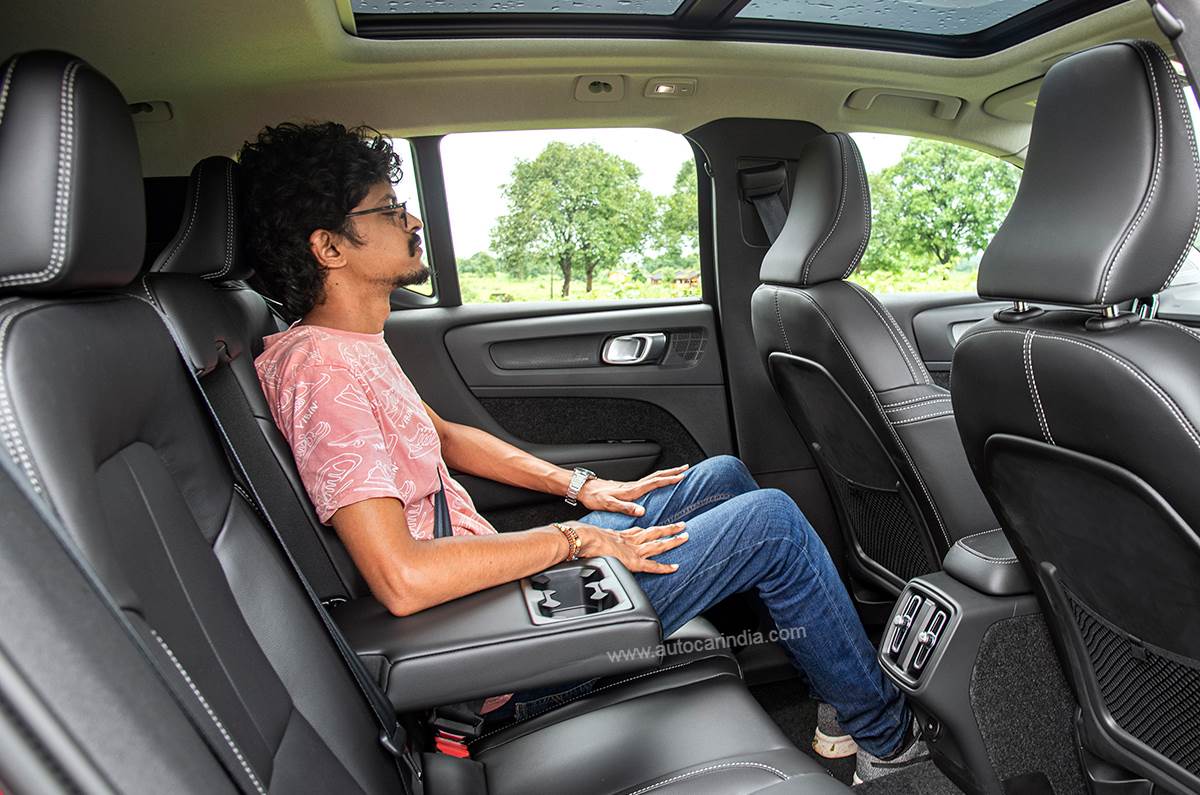 The backrest of the rear seat remains a little too straight on the XC40.

As Volvo, the XC40 facelift gets a wide range of safety equipment, including some ADAS features. The equipment list includes 7 airbags, front and rear parking sensors, rear camera, adaptive cruise control, collision mitigation assist, lane keeping assist, blind spot monitor, hill start assist and hill descent control. Although the XC40’s ADAS features work well, there are only limited places you can use them.

Perhaps the biggest change to the Volvo XC40 took place under the hood. The engine is the same 2.0-liter T4 turbo-petrol four-cylinder that served on the outgoing model, but on this facelift it gained a 48V mild-hybrid system, which impacts the experience of conduct. At idle, the four-pot engine remains a refined unit, with barely any sound or vibration filtering into the cabin. 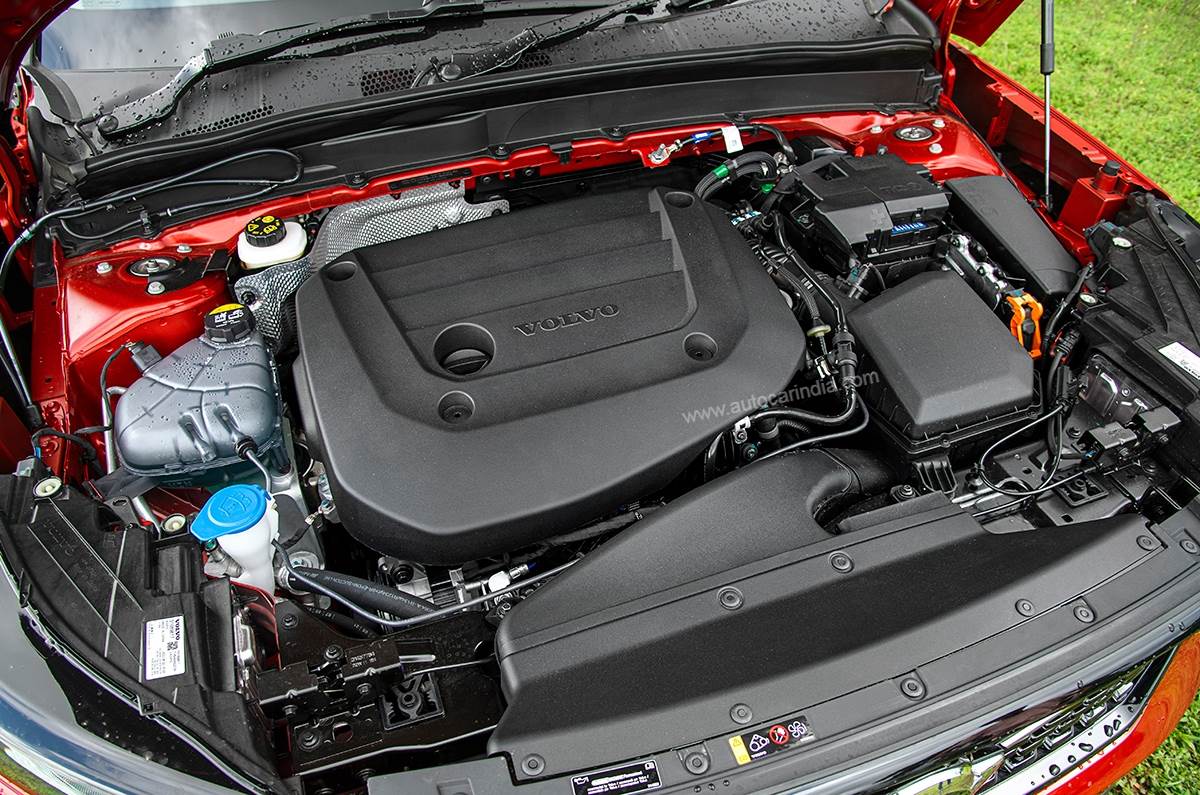 In terms of power, the engine has gained only 7hp (197hp), while the torque remains the same as before at 300Nm. However, this B4 mild hybrid feels more responsive than the outgoing T4 version. You can feel the hybrid system’s assist when accelerating and it has helped improve off-the-line response as well. The engine pulls cleanly all the way to redline and is pretty linear in its delivery as well.

Along with the performance boost, the mild-hybrid system should also improve the XC40’s fuel efficiency. However, Volvo has yet to reveal an official figure and we have yet to test it on our fuel efficiency cycle. Power is sent to the front wheels only via an 8-speed torque converter automatic gearbox. While the gearbox is sufficiently seamless in its operation, it’s not the fastest to respond. However, the responsive engine helps mask some of the box’s shortcomings. There’s also a manual mode for the gearbox, operated via the crystal shifter, but that doesn’t feel very engaging.

In terms of ride, the XC40 facelift impresses with its stability at high speeds, but the ride is a bit firm at low speeds on rough roads. But it’s never uncomfortable because the jolts rarely filter inside and the cabin is well insulated from the outside world. 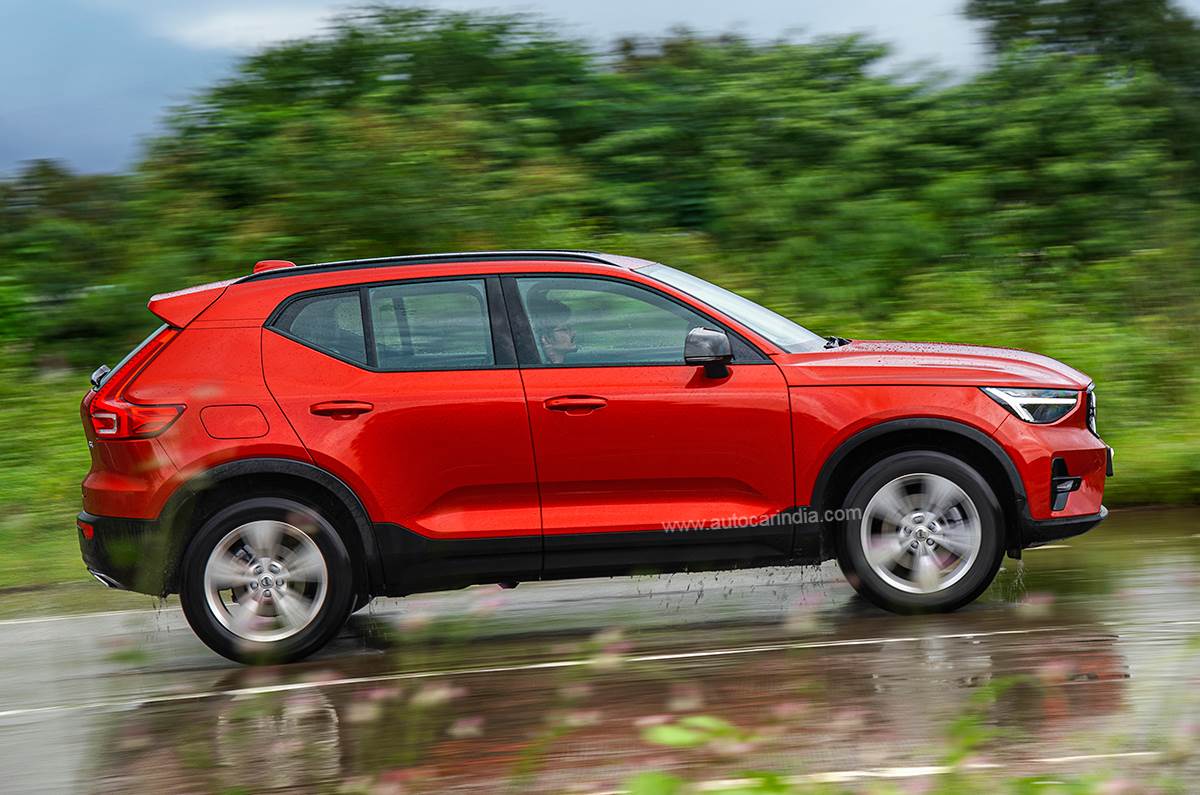 The XC40 facelift isn’t a BMW X1 when it comes to handling, but it feels confident in the corners. Body roll is well contained, steering is consistent and there’s good grip too. There are also two modes for the steering, and while they help increase weight, they don’t add much in the way of feedback.

The Volvo XC40 facelift is available in a single fully loaded variant priced at Rs 43.20 lakh (introduction, ex-showroom, India). And although it will be increased to Rs 45.90 lakh (Rs 1.40 lakh more than the outgoing XC40 T4) after the launch period, its price will be on par with rivals like the Mercedes-Benz GLA 200 (Rs 44.90 lakh) and the recently introduced Audi Q3 Premium Plus (Rs 44.89 lakh).

Where it lags is rear seat comfort and its service network isn’t as extensive as its German rivals. Beyond that, the Volvo XC40 remains a handsome SUV with safe and predictable handling and the step-by-step facelift changes only add to an already impressive package. Plus, the mild-hybrid system makes it even more drivable and will also help with efficiency.

So, in conclusion, if you’re looking for a comfortable and well-equipped luxury crossover, this one is definitely worth a look.