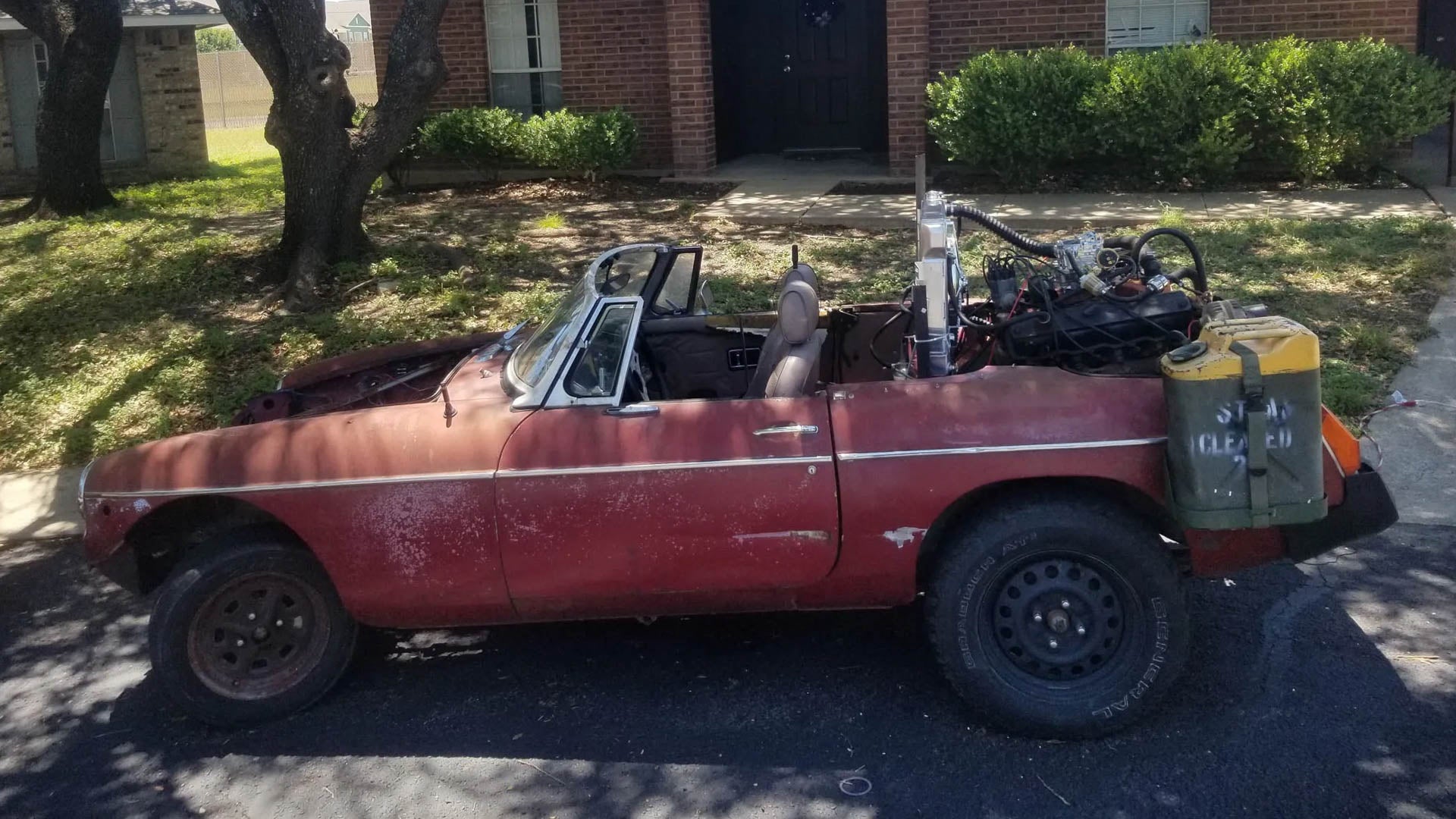 Have you ever watched Mad Max: Fury Road and fancy driving one of their handcrafted post-apocalyptic death traps on public roads? Well, it seems to be that obscure automaker West Devon thought when he stuffed a Chrysler V8 into the trunk of an MGB Roadster to create one of the craziest, most dangerous, yet most incredible builds I’ve ever seen.

The 1979 MGB originally used a naturally aspirated 1.8-litre four-cylinder engine and a four-speed manual transmission to drive the rear wheels. He also weighed less than 2,500 pounds, making him a featherweight by today’s standards. However, West had none of that. Instead, he decided to rip out his tiny four-cylinder (which probably didn’t work anyway) and stick a 318-cubic-inch Chrysler V8 out of a 1966 Dodge Charger. this monstrous engine wouldn’t fit in the MGB’s tiny engine bay. So he put it in the trunk.

However, to get the Chrysler V8 to power the rear wheels, without modifying a rear transaxle to accommodate, West sent power forward, through a Chrysler A-727 three-speed automatic transmission, to a transaxle. transfer Humvee NGP 242 in the engine compartment, which appears to be held in place by a chain. This transfer case then sent the power rearward, to the rear axle of the MG to propel the rear wheels, but to get the rear to fit everything and handle the weight of a V8, it needed a modified Jeep CJ5 rear suspension. So the rear end is actually raised, sitting on steel wheels and General Grabber AT all-terrain tires. It’s downright crazy.

From the driver’s seat, you can actually touch the spinning driveshaft through the cabin. In fact, you have to lean over it to catch the handbrake. You better not drive this car with long hair or it could get stuck in the U-joint, giving you an impromptu buzz cut. Luckily, West didn’t need to install a wind deflector for the cabin, because the V8’s radiator makes just one. If you need to stop quickly, which you might very well have due to a rear-mounted V8 in a sub-2,500-pound convertible, you’ll have to rely on Dodge Neon front brakes. Yeah.

I’m not going to lie to you, I love this car. Don’t get me wrong, it’s crazy. But the ingenuity behind it is impressive and there’s something really fun about the “I don’t care how it works, as long as it works” mentality behind it. I wouldn’t drive it, as I’ll probably need a tetanus shot afterwards, but I like that it exists. Now I want to watch Mad Max.