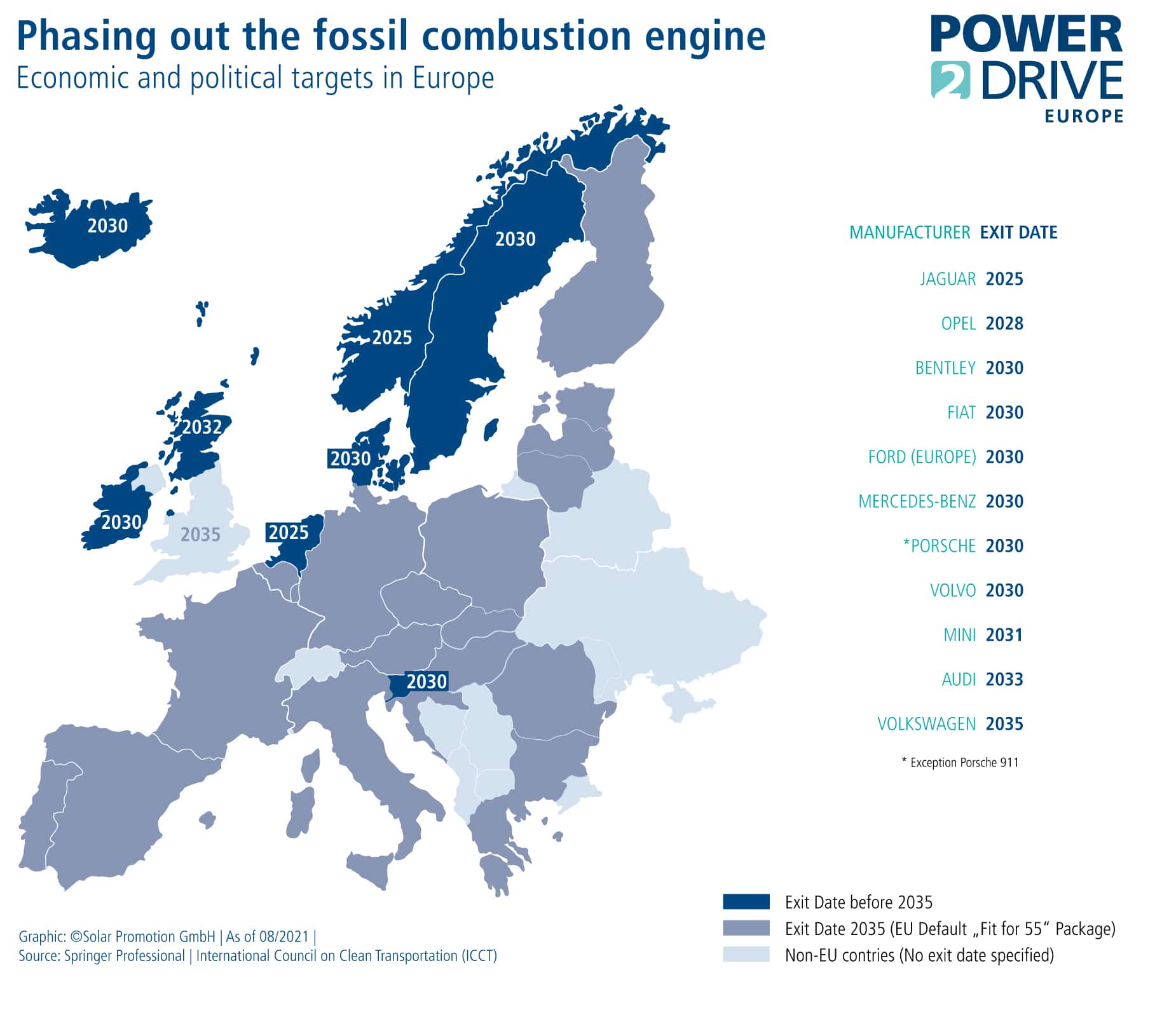 The end of the internal combustion engine

With the EU’s Fit for 55 legislative package, the internal combustion engine is set to disappear: from 2035 all new vehicles registered in Europe will be zero-emission, Power2Drive Europe said on August 19, noting that many automakers have already adjusted their strategies to achieve this goal.

According to Power2Drive Europe, which is part of The smarter E Europe – the continent’s largest platform for the energy industry, the success of electric mobility is an important step towards clean transport and secures the economic position of Europe as a commercial and industrial center. thanks to its transversal innovation efforts.

Thus, electric vehicles promote a new concept of mobility and offer added value to society as a flexible system of temporary storage of green energy (vehicle-to-grid).

The worlds of new energies and mobility are joining forces, including back on site: the Power2Drive Europe Restart 2021 trade fair will be held from October 6 to 8 in Munich and will present charging solutions, battery electric vehicles as well as intelligent integration of e-mobility into a renewable energy system. The aim of the event is to promote renewable energy sources, decentralization and digitization as smart links between the electricity, heating and transport sectors.

“By launching the Fit for 55 legislative package, the European Commission has taken the decision to move away from internal combustion engines. Now, car manufacturers are required to do the same, ”said Power2Drive Europe.

According to the European Commission plan, annual emissions from new vehicles are to be 55% lower from 2030 than 2021. By 2035, this figure will rise to 100% compared to 2021, which means that all new vehicles registered from 2035 would be emissions free.

“An explicit deadline gives clarity to both industry and consumers on the transition. It also ensures that the EU remains in pole position in terms of launching electric vehicles into the global market, ”said the secretary general of AVERE. Philippe Vangeel noted.

The European Association for Electromobility, AVERE, will continue to actively lobby Brussels to extend the deadline to 2030, Power2Drive Europe said, adding that some European countries are ready to go even further than EU targets. fixed.

From 2025, only passenger cars and light commercial vehicles without emissions will be sold in Norway. In the Nederlands. New buses must be emission-free by 2025, just like new passenger cars from 2030, according to the International Council for Clean Transport (ICCT). Denmark, Iceland, Ireland and Sweden have pledged to end the sale or registration of passenger cars with internal combustion engines from 2030, according to the ICCT. The UK has announced a ban on the sale of conventional diesel and gasoline passenger cars for 2030. Countries that have not yet set a deadline like Germany, or without long-term targets, like Spain with its goals for 2040, must reconsider their plans.

The majority of automakers have adjusted their business strategies and have already decided to say goodbye to the conventional combustion engine, said Power2Drive Europe. Volkswagen has decided on 2035 as the last deadline for the change, Fiat and Ford have decided on 2030. Mercedes-Benz recently announced that by 2030 “only battery-powered electric vehicles will be available where market conditions permit” . Opel wants to be an electric mobility brand only in Europe by 2028. “The list goes on: Volvo, Jaguar and Mini all aim to move away from the combustion engine by 2030, 2025 and 2031 respectively. So, in fact, the industry is the one leading the way, offering advice to countries and their governments when it comes to deadlines. Many other car manufacturers, foremost among them Tesla, but also Polestar (Joint Venture of Volvo and Geely) and many others have bet on electric vehicles from the start. Moreover, it is not only users and society that will benefit from cross-sector innovation – clean transport efforts, new mobility concepts and the integration of electric vehicles as a mobile battery storage system in buildings. Sustainable energy systems (vehicle-to-grid) also add value to the economy, ”said Power2Drive Europe.

POWER2DRIVE EUROPE RESTART 2021: THE END OF THE INTERNAL COMBUSTION ENGINE – MANY AUTOMAKERS ARE READY