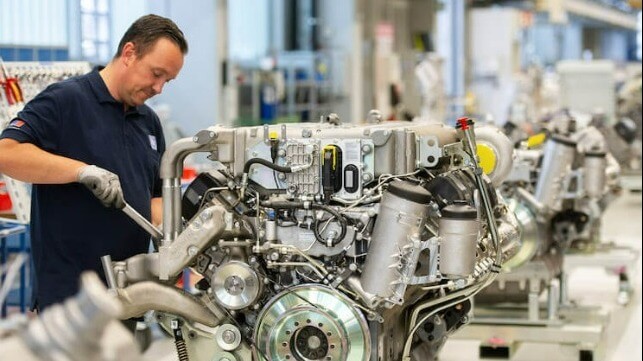 Rolls-Royce’s mtu engines power many of the vehicles and ships on which the operational readiness of German and allied armed forces depends. In order to contribute to the security of Germany and allied countries and to be able to meet the increasing demand for mtu engines for military applications due to the change in security policy in a fast and reliable manner, the company is developing capacity in the years to come. Rolls-Royce plans to hire up to 450 additional employees in its Power Systems business over the next ten years, depending on the specific order situation. Delivery capabilities need to be improved through expansion of facilities and assembly lines. In this way, Power Systems consciously demonstrates that the company intends to remain a reliable and trusted partner for the German armed forces and its allies.

The most important vehicles and ships equipped with mtu engines include the Puma infantry fighting vehicle, the Boxer armored transport vehicle and the Leopard 2 main battle tank, as well as the K130 corvettes and U212 submarines. Following the events in Ukraine, the German government and other countries decided to procure vehicles and ships of these and other types in greater numbers than originally planned. Therefore, it requires more mtu engines and propulsion systems.

Thelse Godewerth, Chief People Officer and Labor Director at Rolls-Royce Power Systems, said: “We very quickly grasped the situation and proactively developed a concept to deliver the engines and systems as quickly and as quickly as possible. as soon as orders arrive, despite disrupted supply chains and raw material bottlenecks. We have developed this concept in close cooperation with politicians, procurement authorities, end customers, manufacturers and our suppliers. It is clear that we will not be able to handle the new orders we expect in the months and years to come with our existing workforce and equipment. This is why we will invest to guarantee our ability to deliver as military demand increases and thus support the operational readiness and capabilities of the armed forces of democratic nations.

Knut Müller, Vice President Global Governmental at Rolls-Royce Power Systems, said: “With our long-term planning, we are laying the foundations for a new, agile cooperation between supply authorities, armed forces and industry. In order to be able to tackle current and future challenges together, we also need concrete commitments from politicians as soon as possible as to which vehicles and vessels to procure and in what specific quantities. Only then can we, together with our suppliers, reliably guarantee that the mtu systems will be delivered on time. It is also an important contribution to maintaining key technological capabilities and highly skilled jobs in Germany.

Low-emission and climate-friendly mtu technologies for the armed forces

Beyond providing existing propulsion and power solutions, Rolls-Royce Power Systems is developing sustainable and climate-neutral technologies that can play a major role in modernizing armed forces in the future. These include hybrid engines, microgrids and fuel cells. Already today, many mtu engines can run on sustainable fuels, the production of which binds as much CO2 as is released during combustion. In this way, even existing combustion engines can operate almost climate-neutral. These efforts are part of the “Net Zero at Power Systems” strategy with which Rolls-Royce Power Systems aims to become climate neutral by 2050.

The products and services described in this press release are not endorsed by The Maritime Executive.