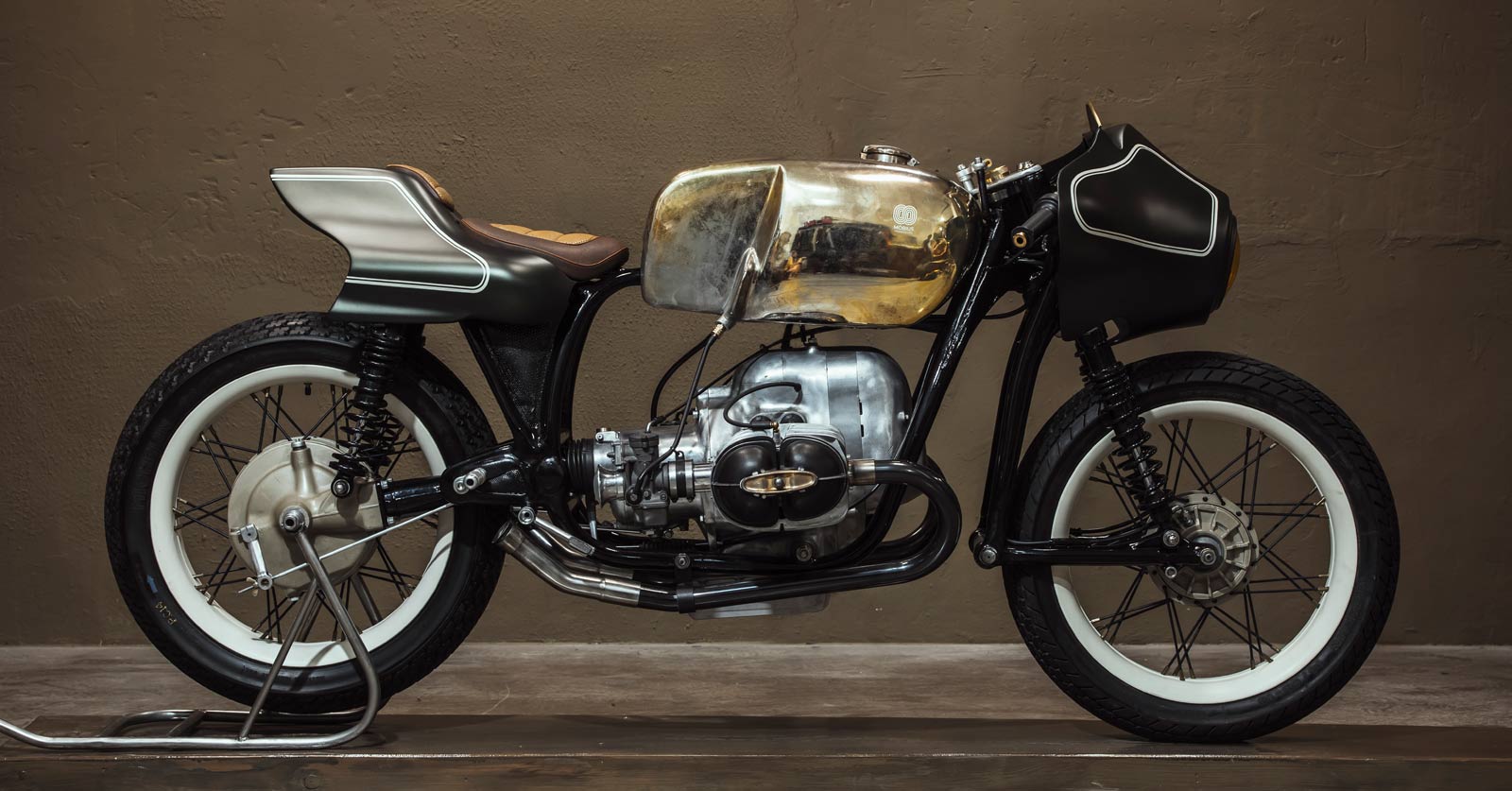 Perilous Endeavour: A BMW R69 with a half car engine

Former BMW bridgehead have always been easy targets for customization. The engines are simple and easy to work with, the bodywork is modular and there is a solid production of interchangeable parts over two decades. You might even say these are the easiest bikes to build, although we dare anyone to call this custom BMW R69 from Möbius Garage easy.

According to builder Sébastien Beaupère, this project has been in the works for more than a decade. Design began in 2012, and the bike has been slowly taking shape ever since, in his garage in the south of France. Ten years might seem like a long time for a single project, but once you get into the details, there’s no doubting how long it’s been. 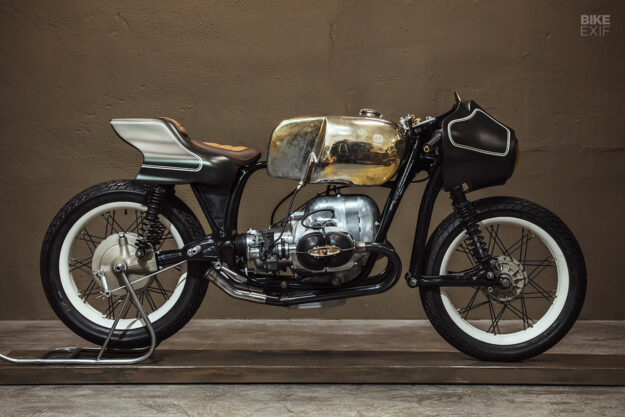 Dubbed the ‘Izarra 700’, this BMW is a testament to what’s on offer on the road less travelled. Its recent top spot at this year’s Wheels and Waves festival in Biarritz was both hard-earned and well-deserved, and the work done in every exacting detail deserves a closer look.

Take Izarra’s engine, for example. You’d be forgiven for thinking this was just another early-model boxer engine that was tweaked for display, but what you see here is a real oddity. 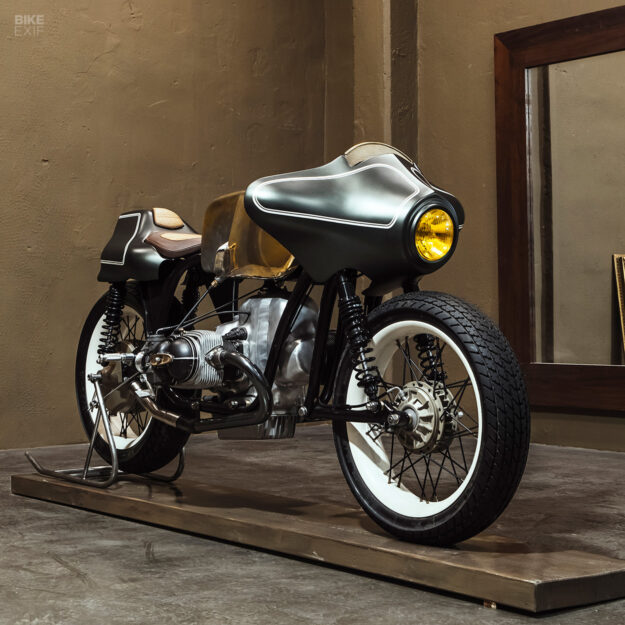 The block should be familiar to BMW connoisseurs of some distinction, as Sebastien got it from a 1955 R69. The rest of the engine, however, isn’t from a motorcycle at all – it’s of a 1964 BMW 700 automobile, which Sébastien meticulously grafted into place against all odds.

“I realized that the race of the connecting rods of the engine of the car and the motorcycle were identical, explains Sébastien. “Only the bore is bigger on the car, making it a hyper square engine. On paper, everything looked simple…” 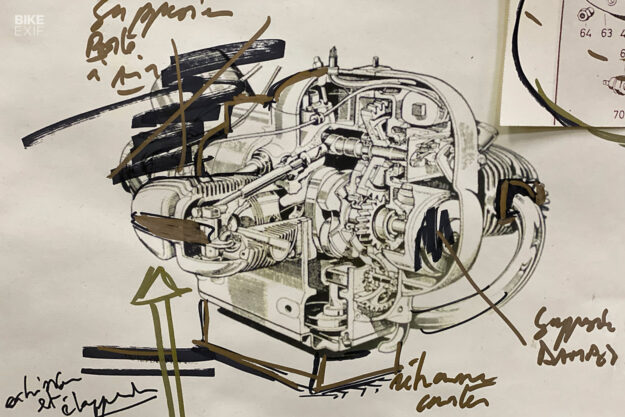 In practice, however, Sébastien soon found that the business was anything but simple. The first hurdle was that the car’s cylinders didn’t quite match the R69 crankcase. He could have stopped there, but instead opted to fill the case openings with aluminum and then re-machine them to accommodate the 700’s cylinders.

After that, things only got tougher. 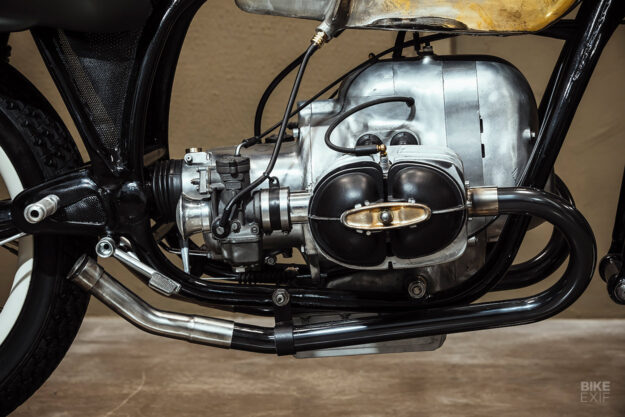 The tubes and rocker arms had to be made to the correct length. The car’s mid-intake layout has been completely reworked to accommodate two horizontal Dell’Orto carburettors. And the custom tailpipes were machined from stainless steel.

Sebastien even opted to keep the car’s original four-speed gearbox, which meant that the engine mounts had to be modified to maintain the correct alignment of the transmission. 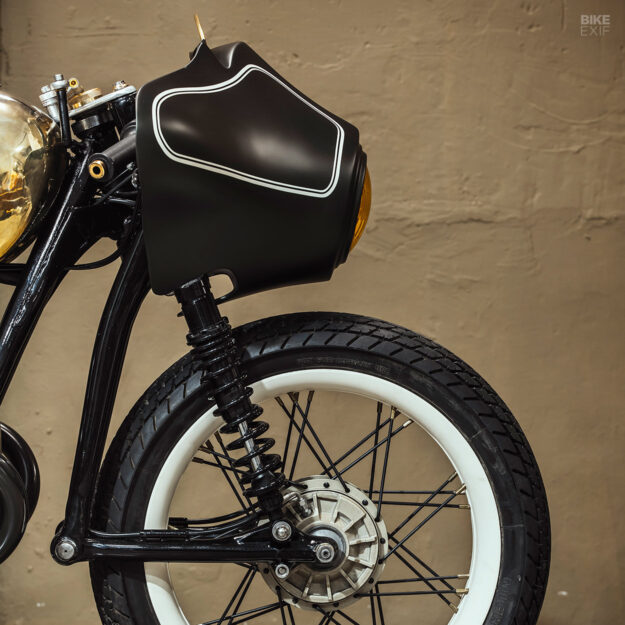 With the powertrain finally complete, Sébastien applied the same no-compromise philosophy to the chassis. He wanted to retain a sort of vintage BMW Rennsport aesthetic, so an Earles fork was the only serious choice for a front end.

A vintage unit was found, then modified to be shorter and wider in the name of performance. The front shocks were upgraded to twin Öhlins units for increased compliance and adjustability, and an 18-inch spoked wheel was installed up front, wrapped in 140-wide Michelin Flat Track rubber. 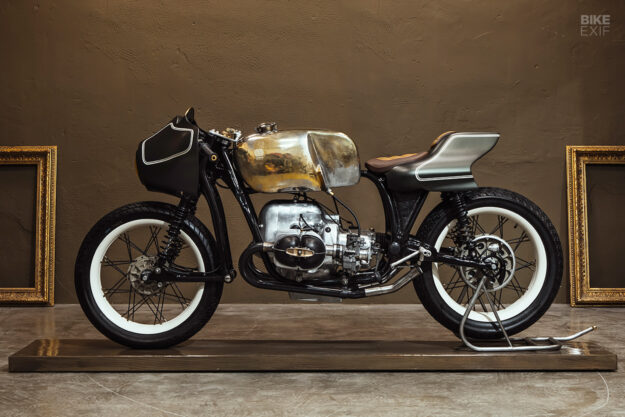 Izarra received the same performance treatment at the rear. By modifying a BMW /6 swingarm, Sébastien was able to cram a 160 wide tire into it. It hangs from a custom-built subframe with a second pair of Öhlins shocks.

The result is a rugged performer with maneuverability to match. Between the engine’s high-compression pistons, enlarged valves, tuned intake and exhaust ports, and upgraded carbs, it now produces 65 horsepower at 7,500 rpm. But as smooth as that engine is, performance is only half the story; this bike is also pure visual pornography. 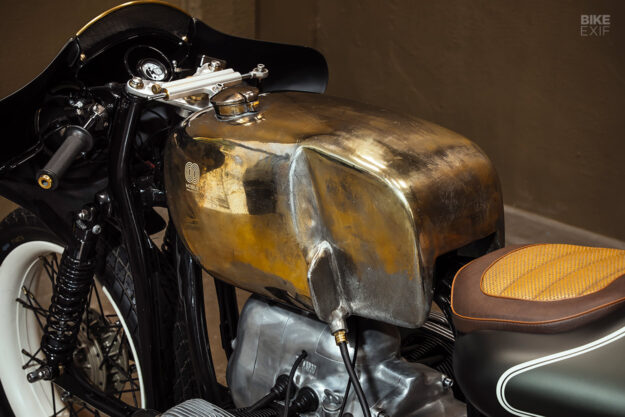 Sébastien took his time for every detail, such as the fuel tank. He could have taken the easier route and kept the classic BMW dark paint and ivory stripes that adorn the front and rear fascias. But instead, he covered the chunky Rennsport-style aluminum fuel cell with a radiant brass coating.

This theme continues in the rest of the R69’s detailing, from the brass engine rocker arms and locking caps, to the struts at the shock absorbers, and down to the striking mesh windshield that sits atop the front fascia. tailored. 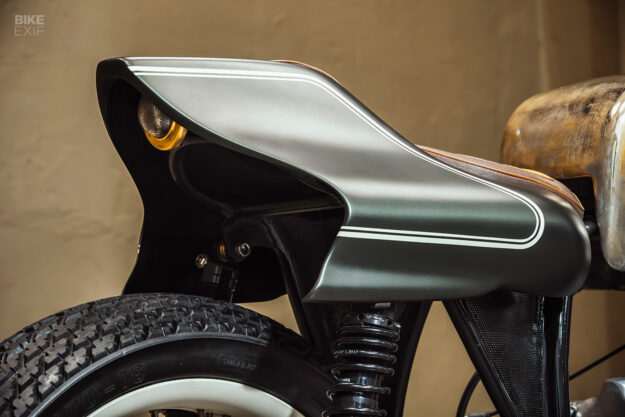 Izarra’s rear cowl borrows its shape from Ducati racers of the late ’70s, like Mike Hailwood’s infamous 900NCR. The split padding that sits on top comes from an old Cessna airplane interior, making it another truly unique detail.

Everywhere else you’ll find clean lines and pure minimalism at its finest. Sebastien wanted to keep exposed cables and wiring to a bare minimum, which led him to ditch the battery altogether and instead rely on a kickstarter or paddock starter, like a real race bike. He even went so far as to route the hydraulic brake lines through the fork itself. 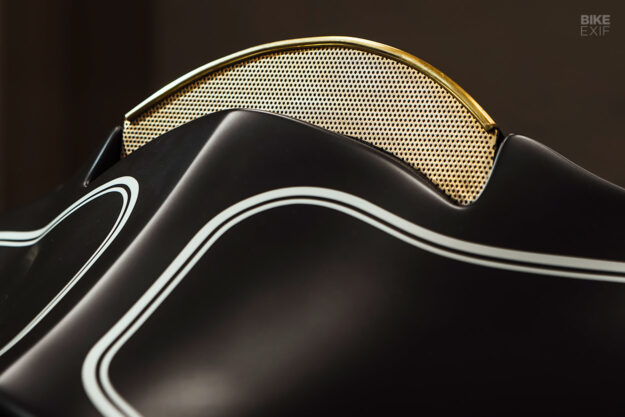 Obviously, Izarra was not an easy build. Ten years is a long time, but for Sébastien, it was time well invested.

Of course, you could argue that da Vinci only took three years to complete the Mona Lisa, or point out that the Statue of Liberty was completed in less than a decade. But none of these can get your blood pumping like this two-wheeled fire engine – and for that we say marquee! 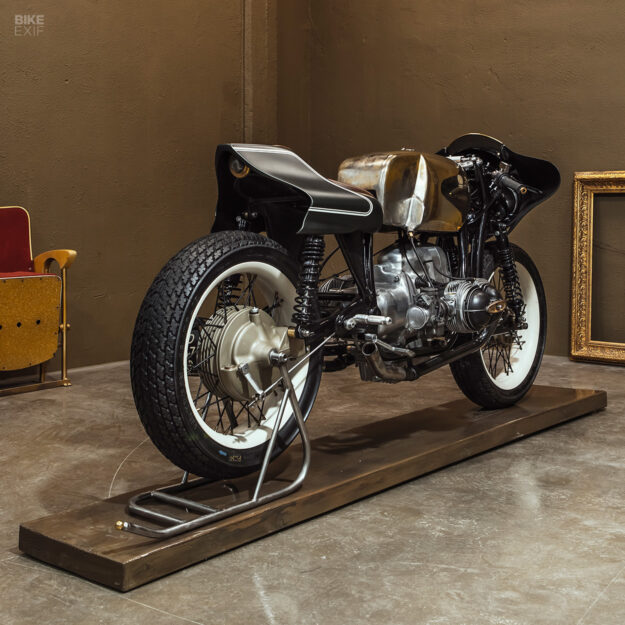