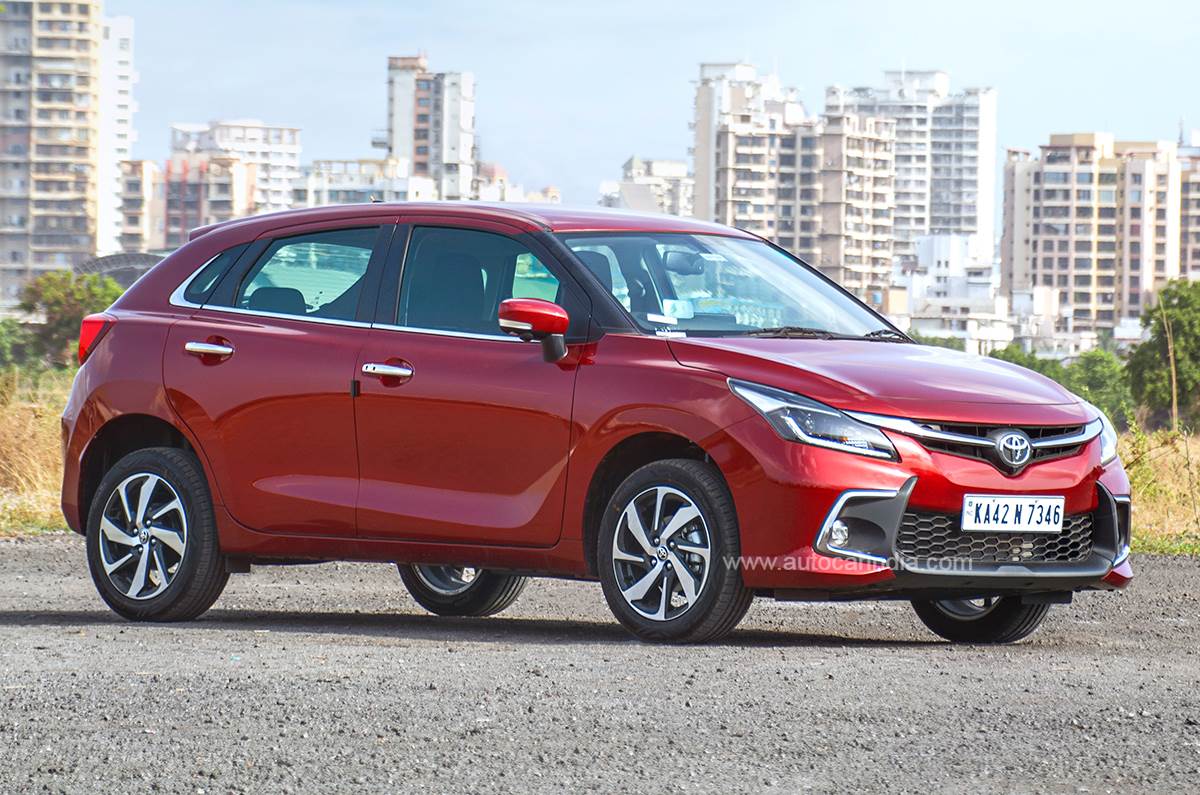 Toyota’s premium sedan is undergoing a major makeover like its twin, the Maruti Baleno.

The Toyota Glanza is basically a rebadged Maruti Suzuki Baleno. Why did Toyota employ this badging engineering strategy? The simple answer is that the Japanese automaker is leveraging its global partnership with Suzuki to share models and technologies, to establish its presence in the premium sedan segment with the Baleno-based Glanza and the compact SUV segment with Urban Cruiser based on Brezza. Not only do these relatively more affordable models (than the Innova Crysta and Fortuner) open Toyota’s doors to a wider range of customers, they also increase overall sales volume. And in addition to increasing profitability for the company and its dealerships, these models also help the company meet company average fuel economy (CAFE) goals.

Earlier this year, the Maruti Suzuki Baleno underwent a major makeover, and now its Toyota counterpart is following suit. Like the Maruti, the Glanza gets a new gasoline engine, an automated manual transmission (AMT), which replaces its CVT (automatic), gets some structural upgrades, completely new interiors and a long list of equipment. 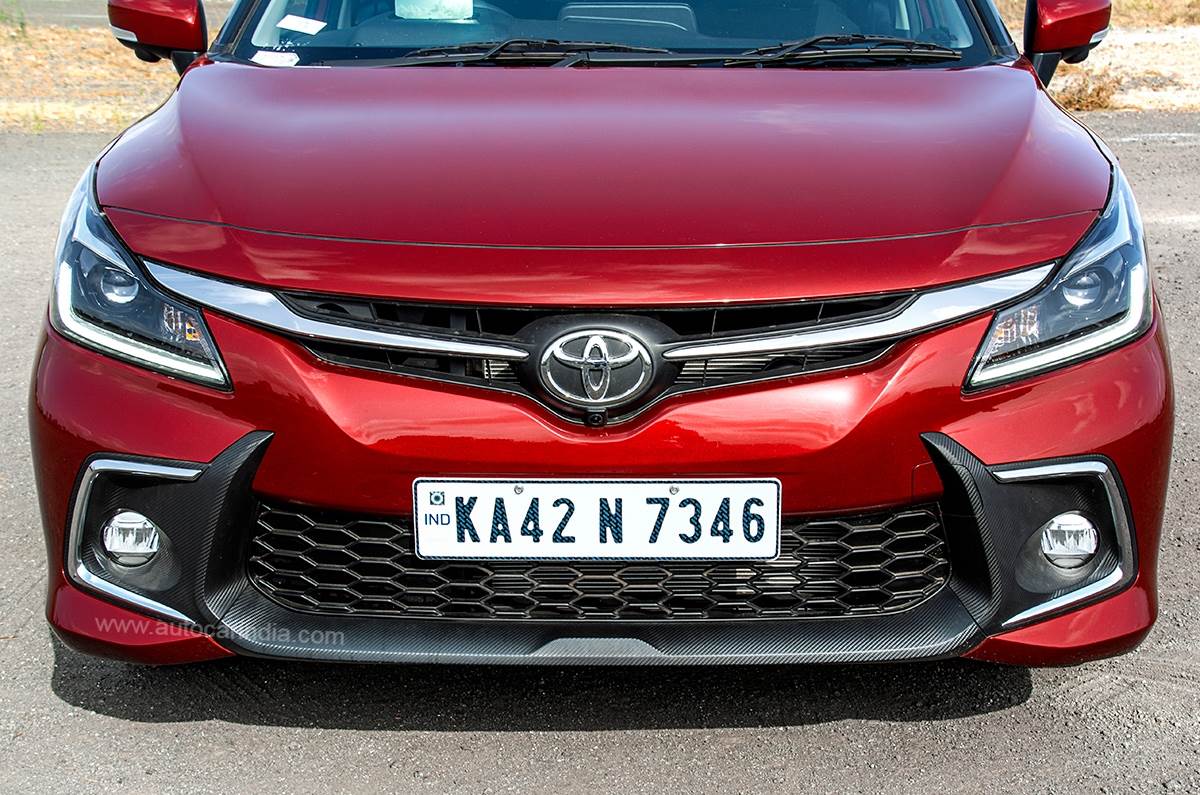 For the 2022 iteration, Toyota designers went to great lengths to bond family with its Toyota stablemates, unlike the 2019 iteration which looked identical to its Maruti twin. Its striking new headlights feature L-shaped LED daytime running lights and are joined by a nicely stretched chrome strip, which not only visually enhances the width of the car, but looks lifted from the Camry Hybrid sedan. A distinctive bull horn design element around the front air dam looks rather radical and it’s finished in a carbon fiber design to add a sporty touch, while C-shaped chrome accents add some bling . The only other Toyota-specific change is its new 16-inch diamond-cut alloys. The side and rear profiles, however, remain identical to the Baleno. 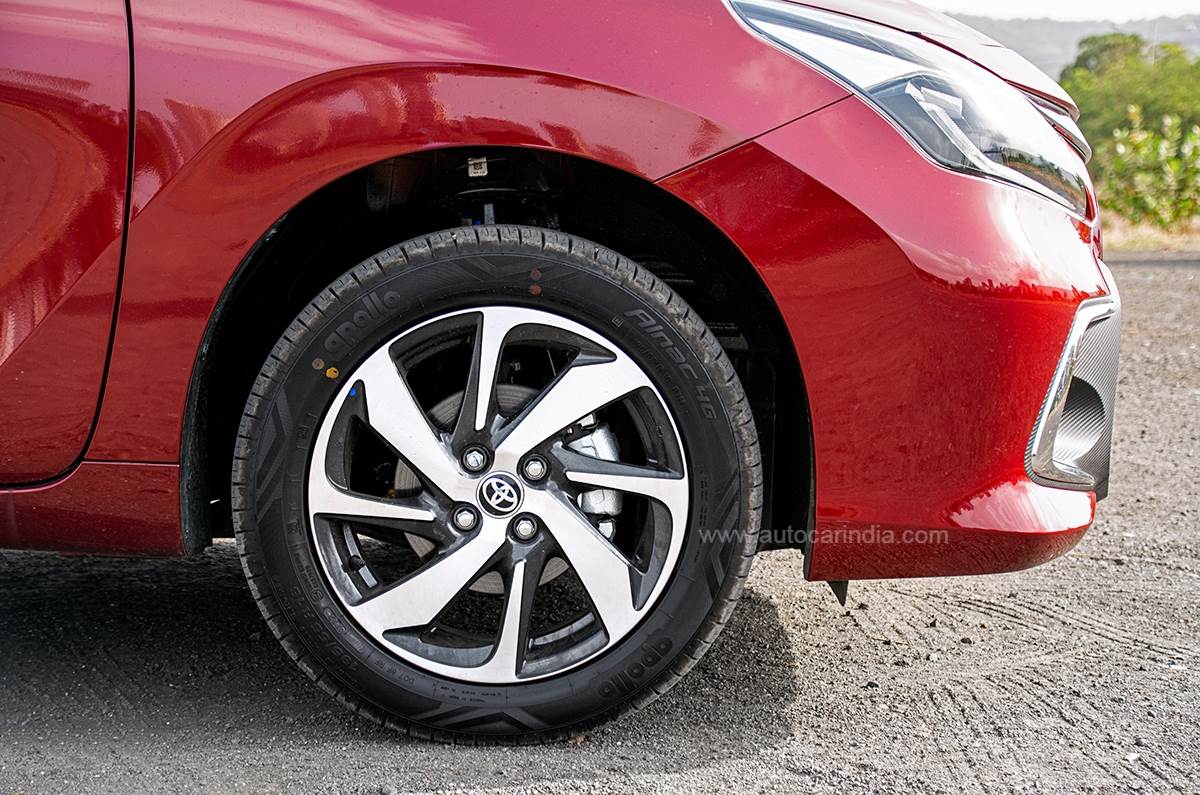 This facelifted version is 5mm shorter in length and 10mm in height, although its width and wheelbase have not been changed. The biggest news here is that this iteration has undergone some structural improvements and also receives new equipment, due to which the base variant is 10 kg heavier than a corresponding pre-facelift variant, while the top manual variant is 65 kg heavier, tipping the scales at 955 kg. The AMT variant weighs 25 kg more than the outgoing CVT. 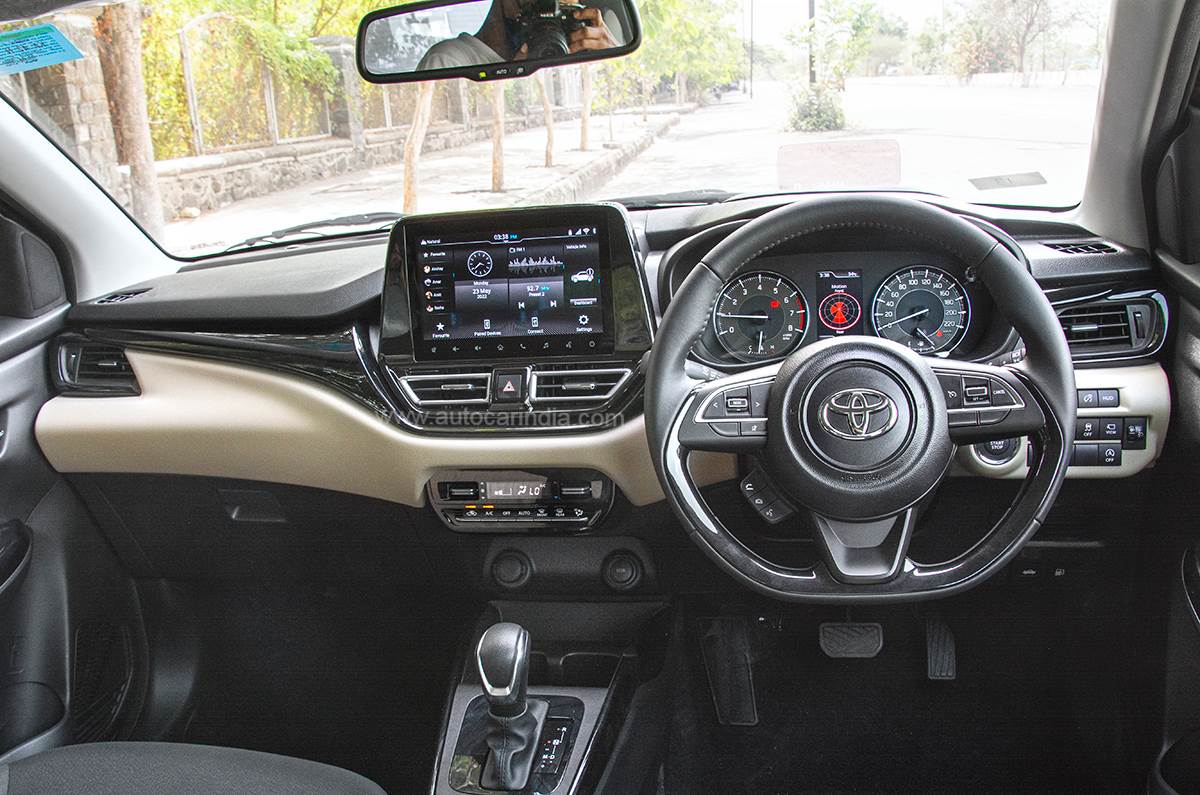 The interiors are a big step forward in terms of design, quality and appeal. The beige and black are bright and give an upscale feel.

The interiors have been significantly revamped and it now gets an all-new dashboard and several other items, which have gone a long way in raising the Glanza’s desirability quotient. Toyota’s very upscale beige-black theme makes a great first impression and brightens up the cabin. The use of piano black and silver highlights, plus premium elements like flat-bottomed steering, an all-new climate console and a new stand-alone touchscreen further enhance its appeal. 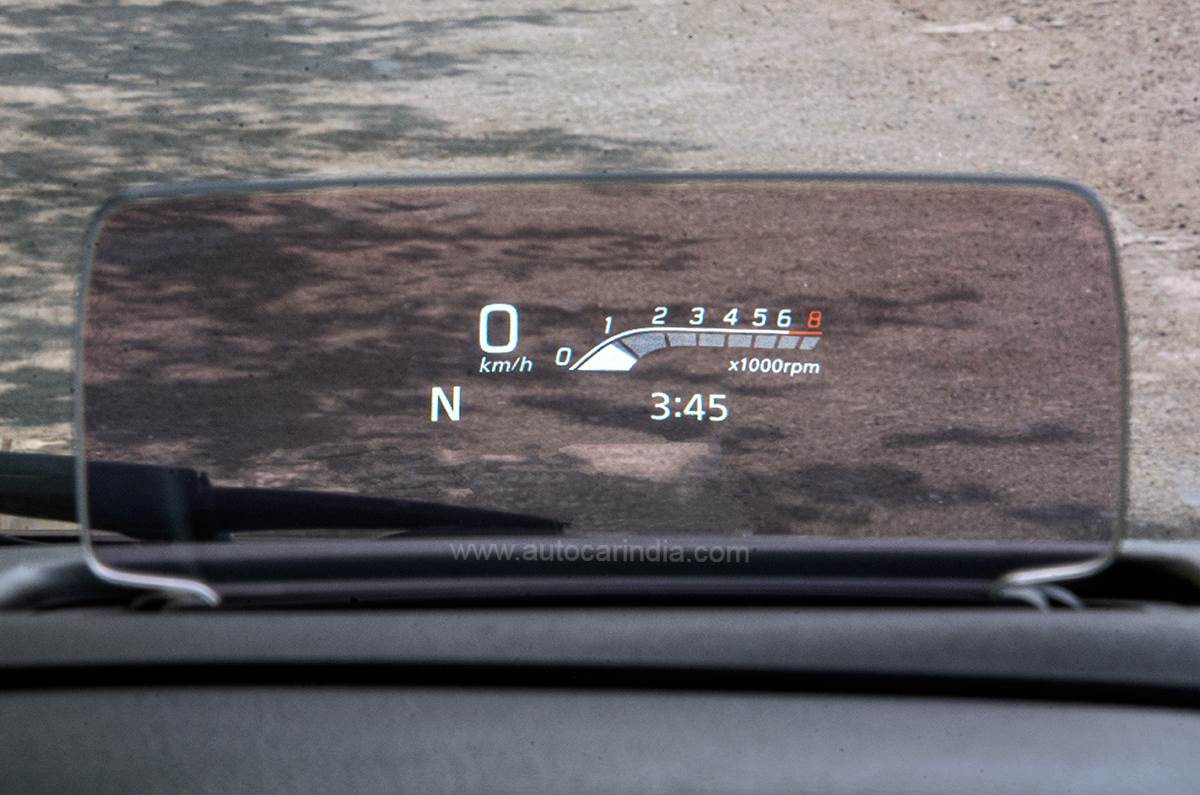 The heads-up display is a cool party trick.

The all-new 9-inch touchscreen infotainment system takes center stage. It is feature packed with Android Auto, Apple CarPlay, voice commands and connected car technology via app. In addition, it incorporates a high-end audio system tuned by Arkamys. While it has all the right ingredients on paper, its execution isn’t perfect – its elevated location hinders forward visibility; the screen is a little too reflective especially in the afternoon sun; and rivals like the Tata Altroz ​​and Hyundai i20 deliver punchier, crisper sound output. 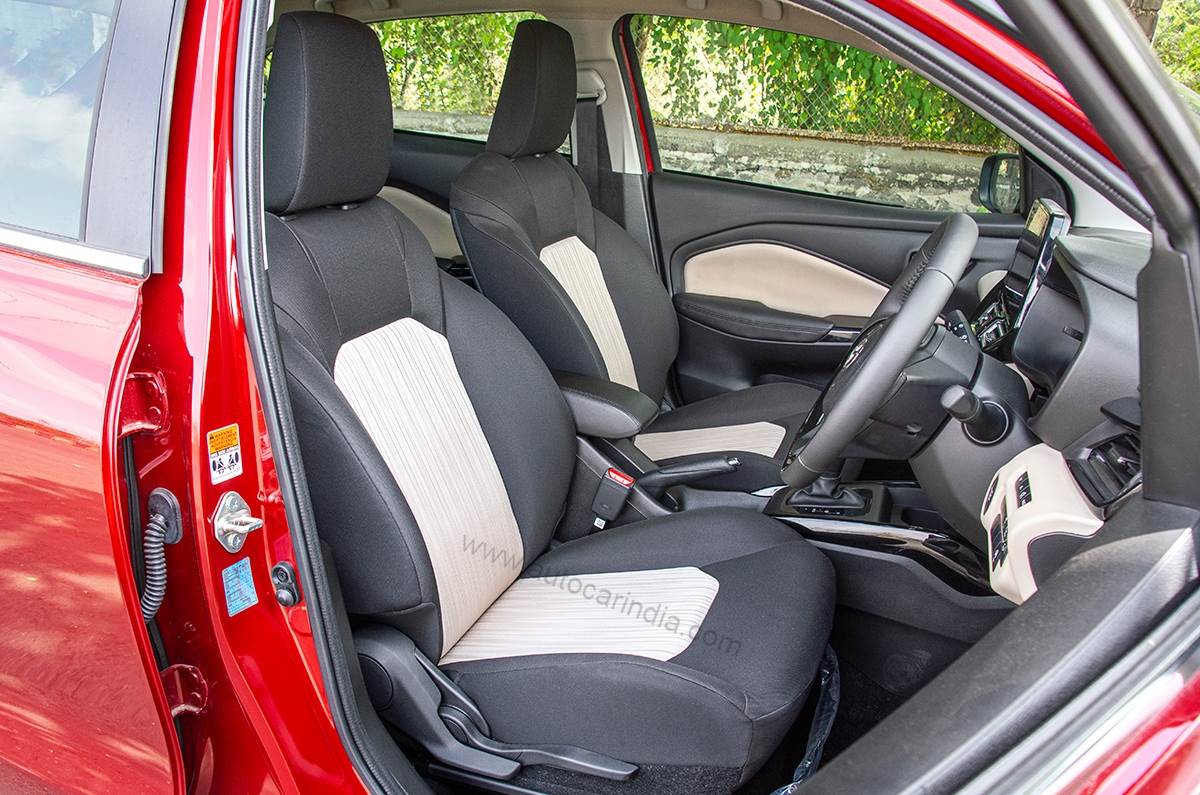 The soft padding of the seats is not ideal for long journeys.

Ergonomics, as before, are on point and finding the right driving position is very easy thanks to a tilt and telescoping steering wheel as well as a plethora of seat adjustments. The seat padding, however, is too soft for comfort, which could trigger back and/or muscle pain on long rides. 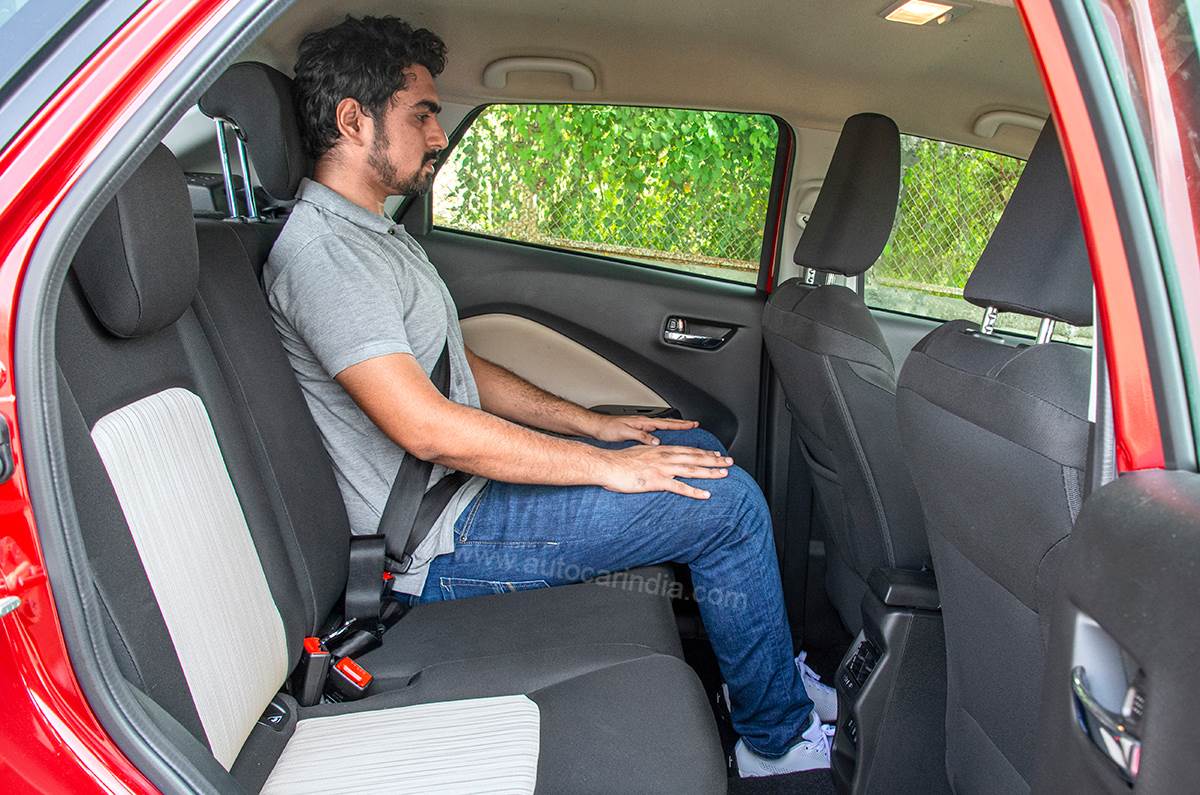 Headroom for taller passengers is limited, although legroom is plentiful.

Rear-seat space is adequate, but tall passengers will find their heads graze the roof. The Glanza’s seat isn’t as wide as the i20’s to accommodate three people abreast in reasonable comfort. This Toyota finally gets dedicated AC vents and clever charging provisions for the rear occupants. Curiously, the luggage space has increased from 339 liters to 318 liters, and its high and high trunk lip is not very practical for loading and unloading heavy luggage. 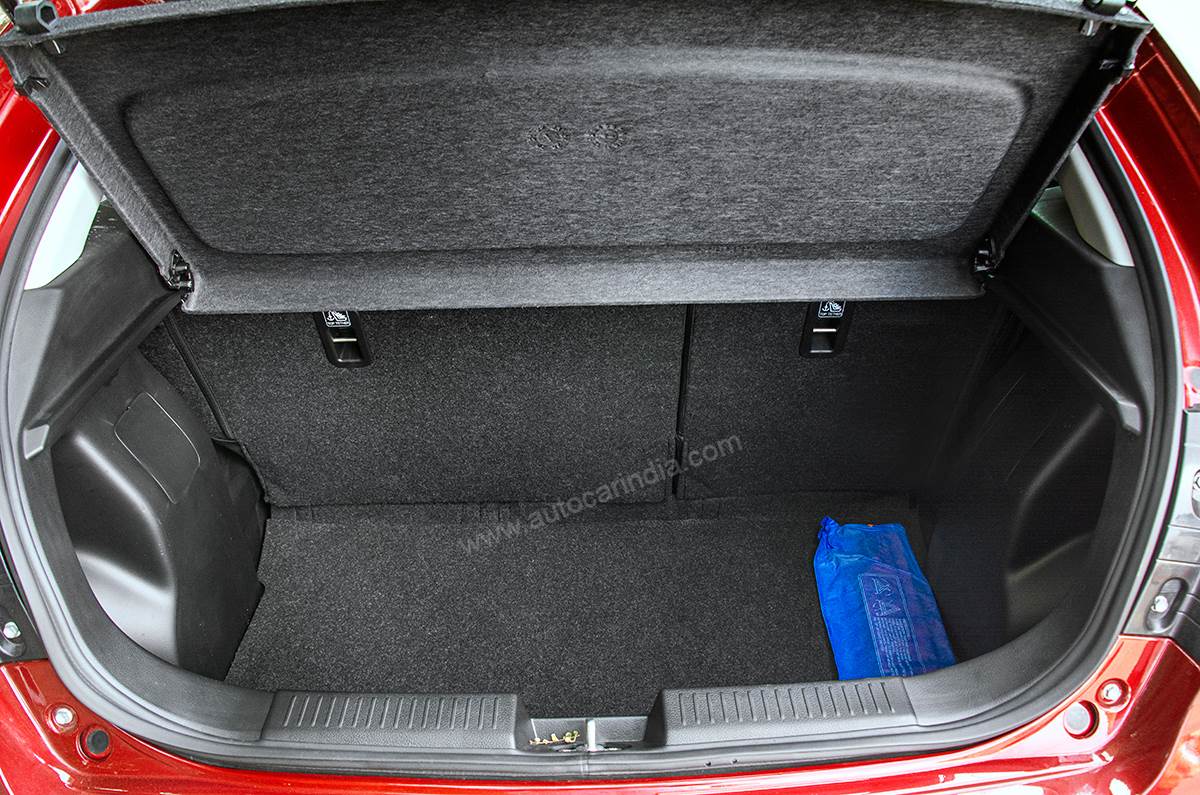 The Glanza gets an extremely useful 360-degree camera, which is handy for parking in and out of tight spots. Toyota also offers a retractable head-up display, which pops out of the dashboard. It’s a great party trick, but the speed projection isn’t in the driver’s natural field of vision, and as a result some might prefer to leave it hidden. Toyota has also taken a step in the right direction by equipping the Glanza with a new safety kit like ESP, hill start assist and six airbags. However, popular features like a sunroof, wireless charging and wireless Android Auto/Apple CarPlay were missed. 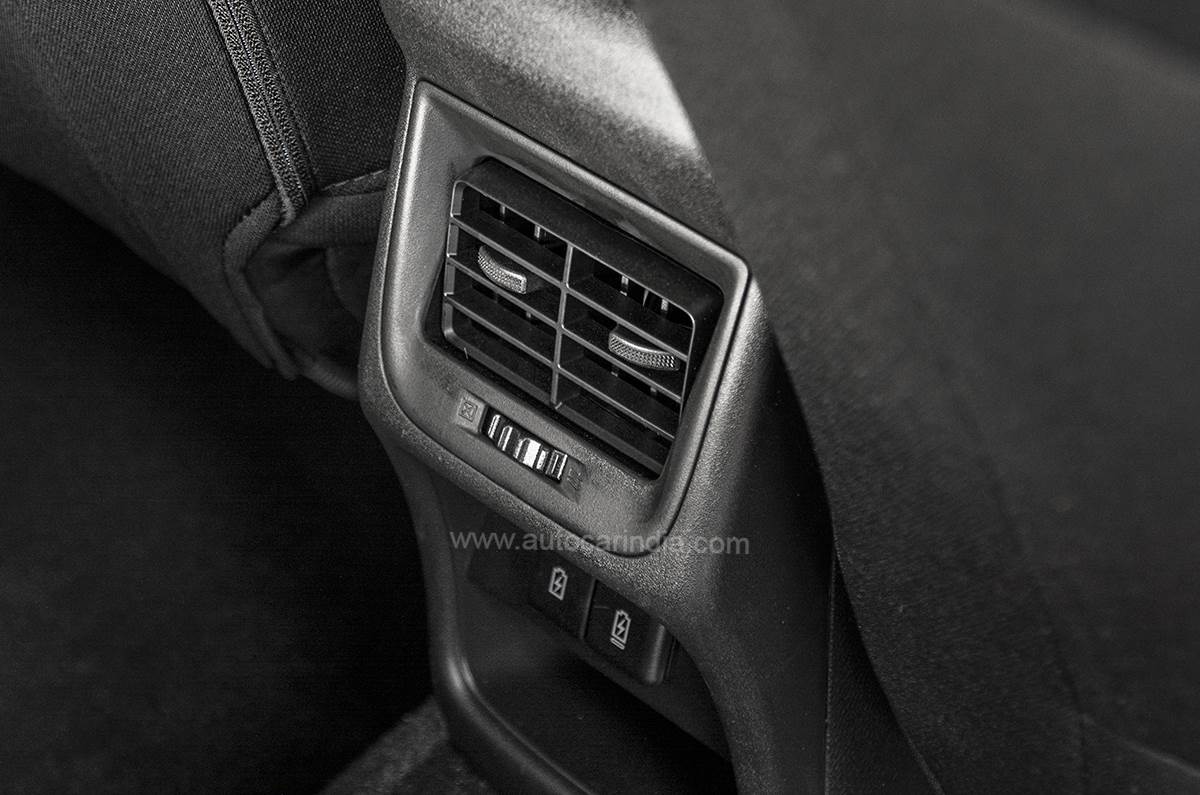 Replacing Glanza’s pre-facelift petrol engines (K12B and K12C) is an all-new 1.2-litre K12N naturally aspirated petrol unit that produces 90hp and 113Nm. In Toyota’s quest to improve efficiency energy and control emissions, this new engine also gets a stop-start engine. Additionally, the company dropped the CVT (automatic) option and replaced it with a 5-speed AMT, which improves fuel efficiency by 17%, from 19.56 kpl (K12B engine with CVT) to 22 .94 kpl (AMT). The other transmission option being a 5-speed manual with a claimed fuel efficiency of 22.35 kpl, which is higher than the K12B’s 21.01 kpl, but lower than the K12C’s 23.87 kpl. Like its predecessor, this four-cylinder engine is one of the best in its class in terms of refinement and smoothness. He is energetic enough to walk around town in a calm, vibration-free manner. If you’ve experienced the older-gen K12B, the performance will be a little off in its current guise; it doesn’t pull as hard or spin as freely as before. When you twist this engine, it will still entertain you with a second wind beyond 4,500 rpm emitting a sporty growl, although the increase in speed isn’t particularly rapid. Its five-speed manual gearbox is the smoothest in its segment, and coupled with an extremely lightweight hydraulic clutch, it makes rowing through doors an absolute breeze. As delicious as the manual is, Toyota’s choice to go with a 5-speed AMT in this segment seems like a step in the wrong direction, especially when rivals offer more advanced and smoother dual-clutch and CVT automatic offerings. . The AMT is programmed to reach the highest possible gear at the earliest in the interest of efficiency, and with smooth throttle inputs and light traffic it does a reasonable job with a “nod”. negligible between shifts. However, in the middle of heavier traffic, where it is not possible to maintain constant speeds, the AMT stops and looks for the right gear, which becomes quite annoying.

But this Toyota proves itself in an area that matters to buyers: fuel efficiency. In our tests, the manual returned 13.80 kpl and 17.50 kpl, while the AMT returned 11.86 kpl and 17.21 kpl, respectively in the city and highway. What’s interesting is that unlike most automatic engine stop/start systems, it doesn’t turn the engine on automatically (at idle) if the cabin temperature exceeds preset air conditioning temperatures. ; it will only do this when you depress the clutch pedal in the manual or release the brake pedal in the AMT. 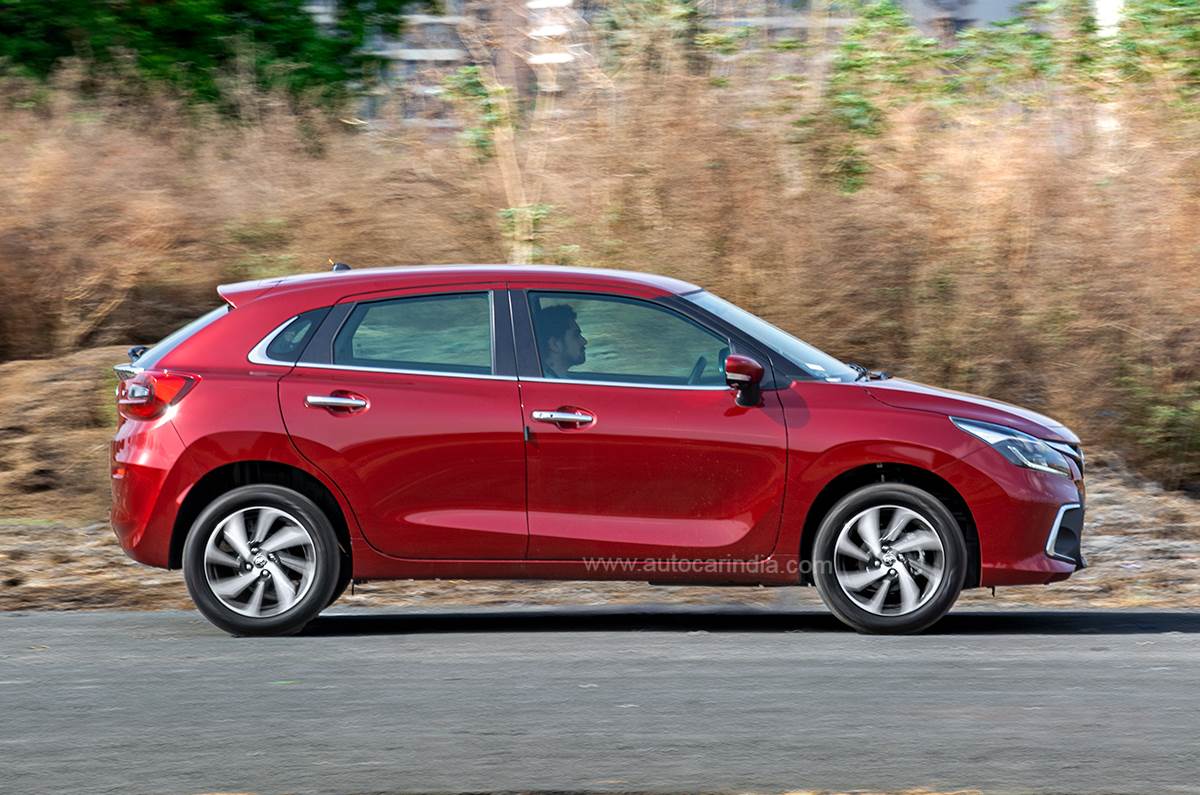 The Glanza’s suspension has been reworked and as a result its low-speed ride is one of the most enjoyable in its class, soaking up potholes and road imperfections in a very mature way. At highway speeds, however, its ride isn’t quite as comfortable, and it transmits road shocks into the cabin quite heavily, resulting in a loaded ride. The steering also witnesses a huge improvement over the previous iteration – it feels smoother, remains reasonably light and it also returns to center (after a half-turn) in a rather natural way.

If you’re looking for a practical automatic hatch, the Glanza AMT doesn’t quite make the cut, as this transmission isn’t as smooth or sorted as the CVT it replaces. Also, if your use includes a significant amount of highway driving, its obviously plush seats and busy ride at higher speeds don’t make it ideal for long-distance cruising. But with an attractive price of Rs 6.53 lakh-9.91 lakh, it is really hard to overlook what the Glanza brings to the table. With this mid-life update, Toyota has taken several steps in the right direction by improving its design and interiors, and offering a generous equipment list. Its new petrol engine is simply among the best in its class in terms of smoothness and refinement, the manual gearbox is easy to drive and, most importantly, it is incredibly fuel efficient, which is one of the strengths of this Toyota. Toyota’s strong brand image and the peace of mind associated with the ‘T’ badge further bolsters its case.

Video review of the 2022 Toyota Glanza