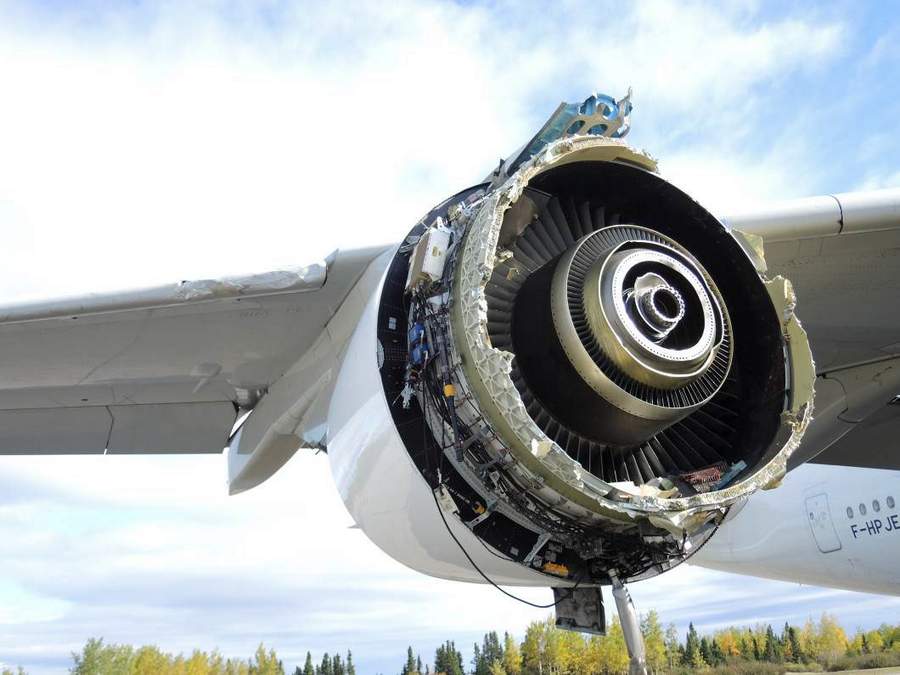 How do you find a jet engine fan buried in a glacier?

What happens if a jet suffers an uncontained engine failure and loses a fan disk hub while flying over a glacier? And you really NEED the hub?

The people who were asking these rather improbable but very serious questions were the air crash investigators. They worked for the BEA (Bureau d’Enquêtes et d’Analyses), that is to say the Civil Aviation Safety Investigation Authority. The accident they were investigating was Air France Flight AF-66. It flew from Paris Charles de Gaulle Airport (LFPG) in France to Los Angeles International Airport (KLAX) in the United States.

The crashed plane, here in flight after the incident. Photo (cropped): Olivier CABARET, DC BY 2.0

The flight had taken off without incident, crossing the North Atlantic, at cruising altitude. But the fan disk hub of engine #4 fails while the crew is flying over a glacier (or glaciers) in Greenland. This aircraft was equipped with four Engine Alliance GP7270 engines. Engine Alliance is a partnership between Pratt & Whitney and General Electric, to manufacture engines for the A380.

The Air France flight crew diverted to Goose Bay Airport (CYYR) in Canada. And they had to face unexpected challenges to get there. They found they had to drift to a lower altitude than planned, flying on three engines. This was because of the increased drag from the failed engine. In addition, the crew was aware that they had damage to the leading edge of the right wing. This played a part in their choosing Goose Bay as a diversion, thinking they might not be able to use the flaps.

The engine after the incident. Also note the damage to the slat, on the left. Photo: BEA

Finding the fan disc hub and the rest of the parts that fell on the Greenland Glacier was a priority. The hub split into three sections. Its central part remained with the engine. But the rest broke in two, one ejecting upwards, the other downwards. The engine air intake also separated from the aircraft. It was probably the inlet that caused most of the damage to the wing. Fortunately, the fuselage suffered no damage.

The accident happened on September 30, 2017. Initially, teams were using helicopters to search a “difficult area” in Greenland. This was the most likely location for the fan disk hub and the rest of the missing parts on the glacier. Search teams used helicopters and found numerous parts, including fragments of fan blades, pieces of the containment box and the nose cone. They also found the entire air intake, in pieces. But these are relatively light pieces.

Looking for a fan on (or in?) a glacier

There was no sign of the much heavier fan disk hub on the surface of the glacier. Bad weather, including snow and high winds, halted the search after just three flights on October 12. And since more snow would now cover the area, investigators knew they would need a new search strategy. Or a new research partner. 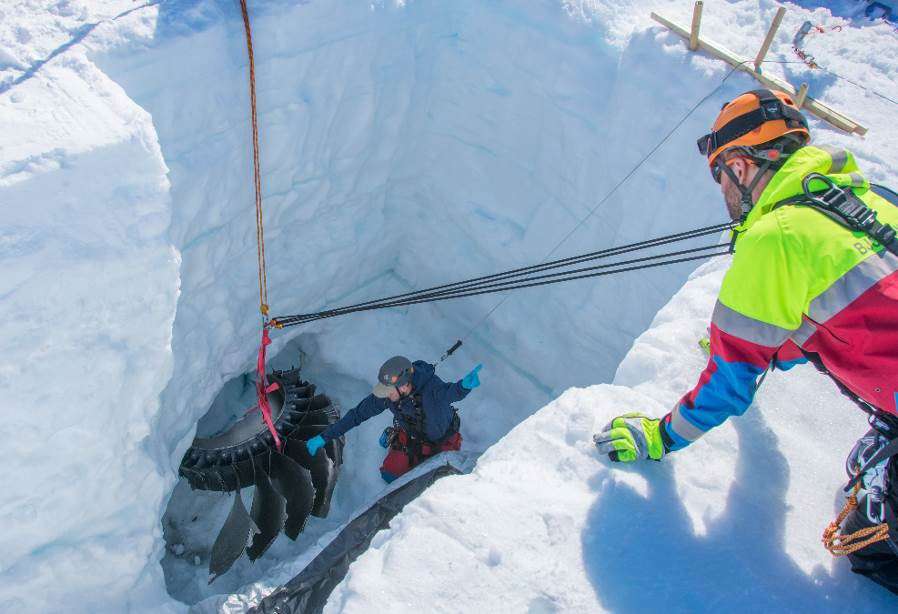 It has no place here… Photo: BEA

The whole operation eventually involved multiple radars, working at slightly different frequencies. The flights took place in April 2018 and lasted about a month. Incredibly, ONERA has mapped a 60 square kilometer (~15 acre) area of ​​snow and ice at a depth of 45 meters (150 feet)! But processing the data was an equally arduous and time-consuming task. Again, this radar technology was brand new at the time. 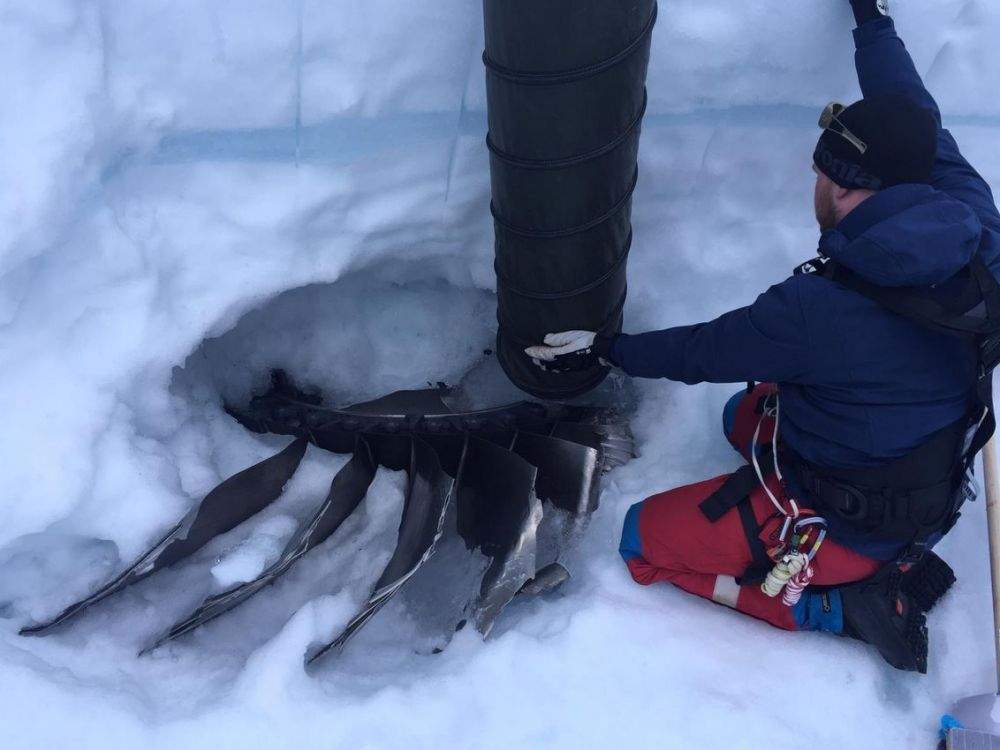 An initial ground search of the glacier, using raw data, found no trace of the fan hub. The team therefore regrouped, realizing that they would not get their hands on the hub in 2018. But over the following months, ONERA refined its data processing and found three high-probability locations. And one of those three was much more promising than the other two. At the same time, the ground research teams are fine-tuning their own equipment. It was a Danish electromagnetic detection system.

The ground search party found the fan disk hub on the glacier under 4 meters (13 ft) of packed snow. It was exactly where ONERA announced it. They finally extracted it from its cemetery in June 2019. The titanium hub weighed 150 kilos (330 lbs), so extracting it without damaging it, in the middle of nowhere, was no small feat! 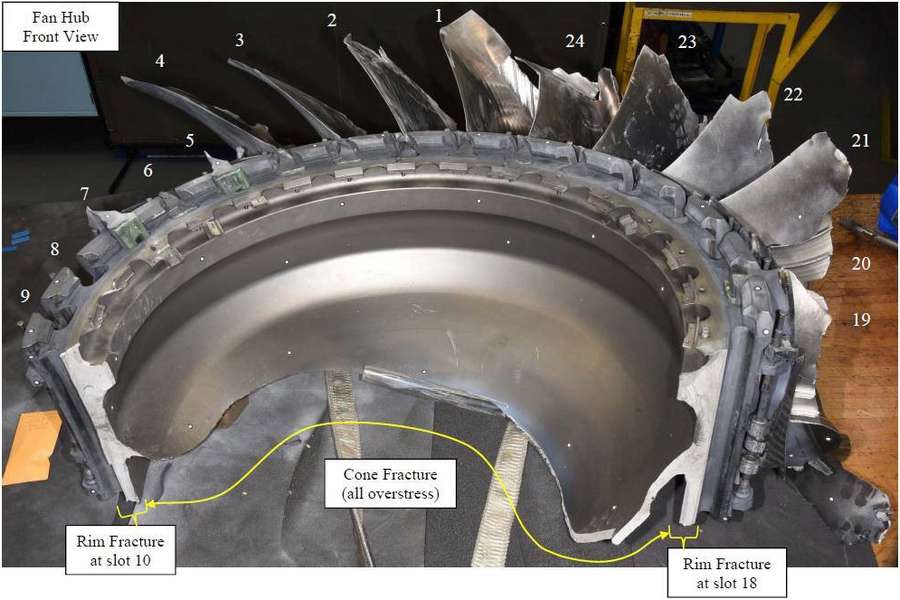 But it was worth it. The discovery of the fan disc hub fragment on the glacier changed the outcome of the investigation. It revealed low cyclic fatigue (LCF) related to the type and size of titanium alloy the fan hub was made of. It also revealed the need to further study the cold fatigue of this alloy and other new titanium alloys.

Fortunately, the engine manufacturer no longer found such weaknesses in other A380s around the world. But the search and discovery of the fan disk hub in this Greenland glacier provided valuable data for future engines.

Spyros Georgilidakis graduated in business and management. He has 14 years of experience in the hospitality and travel industries, as well as a passion for all things aviation and travel logistics. He is also an experienced writer and editor for online publications and a licensed professional drone pilot.