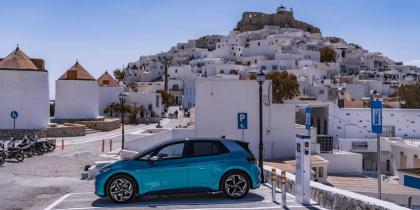 Greece will impose a ban on the sale of vehicles with internal combustion engines from 2030, also prohibiting electricity production from solid fossil fuels, or lignite, from 2029, according to a bill on the protection of the climate, submitted to the country’s parliament on Wednesday

ATHENS (UrduPoint News / Sputnik – May 18, 2022) Greece will impose a ban on the sale of vehicles with internal combustion engines from 2030, also banning electricity generation from solid fossil fuels, or lignite, from 2029, according to a climate protection bill, submitted to the country’s parliament on Wednesday.

The bill includes measures to phase out the use of fossil fuels in transportation, construction and power generation.

By 2030, greenhouse gas emissions should be reduced by at least 55%, and by 2040 by 80%, compared to 1990 emissions levels, according to the bill. The production of electricity from solid fossil fuels is prohibited from December 31, 2028, the duration of use of lignite can be shortened.

From January 1, 2024, at least a quarter of new passenger cars leased or purchased from companies should be fully electric or hybrid electric, according to the legislation.

In addition, from 1 January 2030, new passenger cars and light commercial vehicles can only be registered if they have zero emissions, according to the law, which means that from 2030 the registration of new cars with internal combustion engines will be prohibited.

The law also prohibits the sale and installation of diesel heating in buildings from January 1, 2025, and the sale of fuel oil is only permitted if at least 30% renewable liquid fuel, or biofuel, constitutes its volume. .