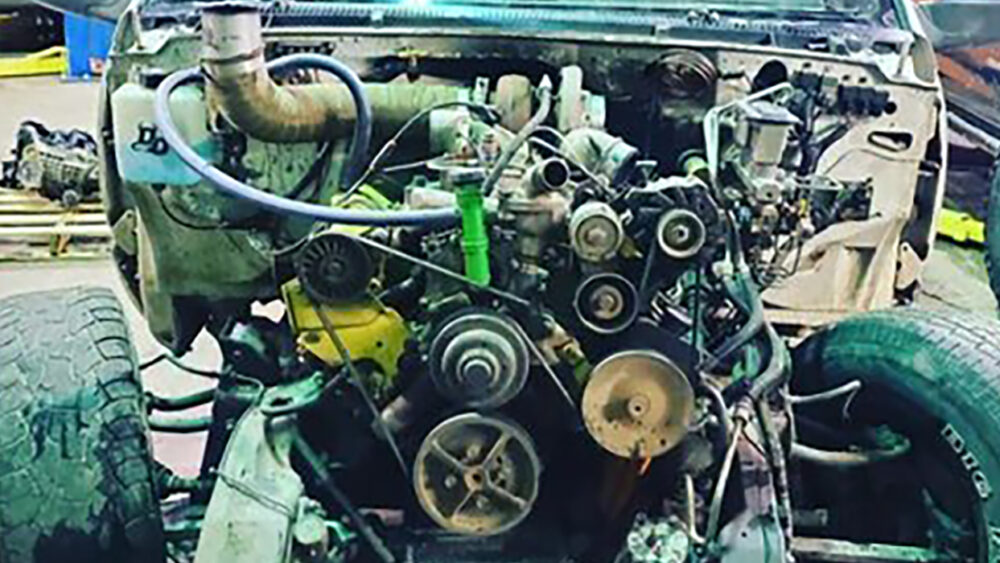 We cover all engine types here at Engine Builder, but we see some more than others (we’re looking at you LS and Cummins). However, the GM 6.5L V8 diesel engine is one of those platforms that we are rarely exposed to just because nobody uses it in their trucks anymore. Especially for racing or pulling.

GM’s 6.5L (along with the 6.2L) is one of the most hated and criticized engine platforms for diesel enthusiasts and mechanics alike. The indirect-injected V8 was produced by Detroit Diesel under the GM umbrella from 1992 to 2000 and all but disappeared from the diesel truck world soon after.

The 6.5 L can still be found in some applications today, such as the Navy, H1 Hummer, vans, and school buses, but you won’t find it in many pickups. The engine was vastly outclassed by the 7.3 L Powerstroke and the 5.9 L Cummins of the early to mid-90s in terms of power. The introductory 6.5 L only developed 180 hp compared to 210 hp for the 7.3 L and 235 hp for the 5.9 L; the torque produced was also significantly lower than the other two. Engines have also fallen far behind in production, which is probably why diesel performance parts are often hard to come by today.

Obviously, for these reasons, you won’t see many guys racing 6.5-liter trucks at the competitive level. Nevertheless, you will always find engine builders who like a challenge. Tyler Loewen is one of them.

Loewen is the lead technician at 23 Diesel and Off-road, a shop in Grand Junction, CO that does everything from oil changes to complete builds. Including her experience on the shop floor, Loewen has eight years of automotive experience in a few different areas. He says his time at 23 Diesel and Off-Road motivated him to complete his passion project – a 1994 Chevy C/K 1500 with a GM 6.5L engine.

He first got the truck in 2012. Only 15 at the time, he tested it before he even got his driver’s license.

“Everyone else in town had third-gen Dodges and 6.0L Powerstrokes, so I had to stick with them and do something interesting,” Loewen says. “I used to ride it stock back in the day, and I have time slips when it ran in the mid 9.10s on the quarter mile.”

Those times have improved greatly since Loewen began seriously upgrading the truck. The first thing he did was turbocharge it and install a water/methanol injection kit.

“I had actually put an HE351 on it, took off a third-gen 5.9L, which was kind of unheard of at the time because nobody else was doing stuff like that,” Loewen says. “I lightened the truck where I could and reduced it to fifteen with a multi-position tuner that was just released at the time.”

Shortly after, Loewen ended up breaking the engine crank, which would leave his truck parked for the time being. With the engine removed for repairs, he ended up getting “carried away” and turning it into a full-fledged race truck.

The bottom end of the engine has been balanced and consists of a stock 0.040˝ drilled block, polished OEM crank, stock cryo-treated rods, 21:1 compression Mahle pistons, ARP main studs and a Fluidampner. Up top, the engine’s lifters and rocker arms are also stock, and Loewen sourced a set of tapered valve springs from COMP Cams to fit the head.

The engine also features Fel-Pro head gaskets and ARP head studs that Loewen torqued to 120 degrees, rather than the recommended 90 degrees.

“No O-rings or fire rings, just two flat surfaces,” he says. “Everyone said the Fel-Pros were likely to blow and the Mahle head gaskets would be better, but I did 56 lbs. of boost on it. No voodoo with the head gasket or anything.

“On the fuel side, I have marine style injectors. They have a bit higher pop pressure; it’s kind of like the difference between a VCO nozzle and a SAC nozzle. Marine injectors have a slightly different angle on the nozzle. needle, which allows for better atomization. They don’t necessarily add power, but they do help make it more efficient.

The truck came with a stock DS4 electric injection pump, but Loewen installed a unique DB4 pump with locked timing to convert the truck to mechanical injection. The four-piston pump operates at a high 20-degree rate, which Loewen says is necessary with large mechanical pumps so you can lock in dynamic timing to compensate for all the extra fuel.

To help up the ante on its 6.5L diesel, Loewen built and hand-engineered the turbo kit on the engine.

“I used exhaust manifolds from pickup trucks and had my friend Cole Johnson of Dark Horse Diesel glue v-clamps into the manifolds,” says Loewen. “From there, I built 2-inch stainless steel risers with bellows, everything up to a custom T4 pedestal. Throughout 2021 I have been running an S372 SXE turbo, which I think might be the biggest turbo ever fitted to a 6.5L.”

When Loewen dynoed the engine during ATS Diesel’s 2021 On the Mountain diesel dyno competition, the truck produced 493 horsepower and 917 lb-ft. of torque on fuel. He reportedly sprayed nitrous, but a wiring problem the day before prevented him from doing so.

This year, Loewen wants to double the horsepower by making various changes to the truck and the engine, including an upgraded S475 turbo, an upgraded injection pump, a new transmission and the addition of slicks.

Loewen’s ultimate goal is to be the first and only 6.5L truck in the Ultimate Callout Challenge. We plan to be there to see if he pulls it off!

The Missile Science Behind Two-Stroke Engines