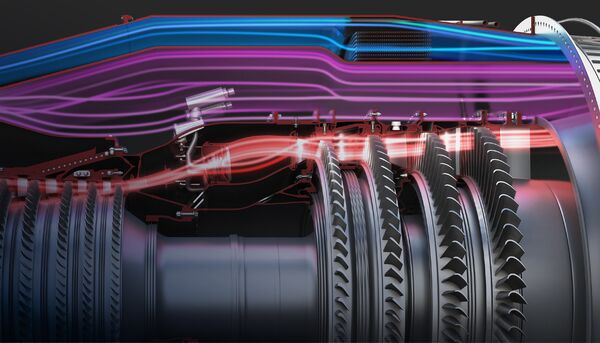 Artist’s rendering of airflow on GE’s XA100 adaptive cycle engine that the company is developing for the U.S. Air Force’s Adaptive Engine Transition Program (AETP). The company has developed a pair of motors for AETP. (General Electric)

Company spokesman Cole Massie said on Dec. 15 that the data validated the performance of the engine and its components against GE and USAF expectations. He declined to provide the speed and duration of the Phase 1 testing.

Phase 1 testing has enabled the company to begin Phase 2 testing at the USAF’s Arnold Engineering Development Complex (AEDC) in the first quarter of 2022. Phase 2 is expected to last approximately three to four months, as previous test campaigns.

Massie said there are no plans for a third phase of XA100 testing. Comprehensive flight envelope testing at AEDC is the cornerstone of AETP testing. Once that’s completed, it represents the completion of the USAF program, Massie said.

Pratt & Whitney is also participating in AETP with its XA101 engine. The company had not responded to a request for comment at the time of posting.

The MOTOR Awards 2021: the sweetest note on the engine