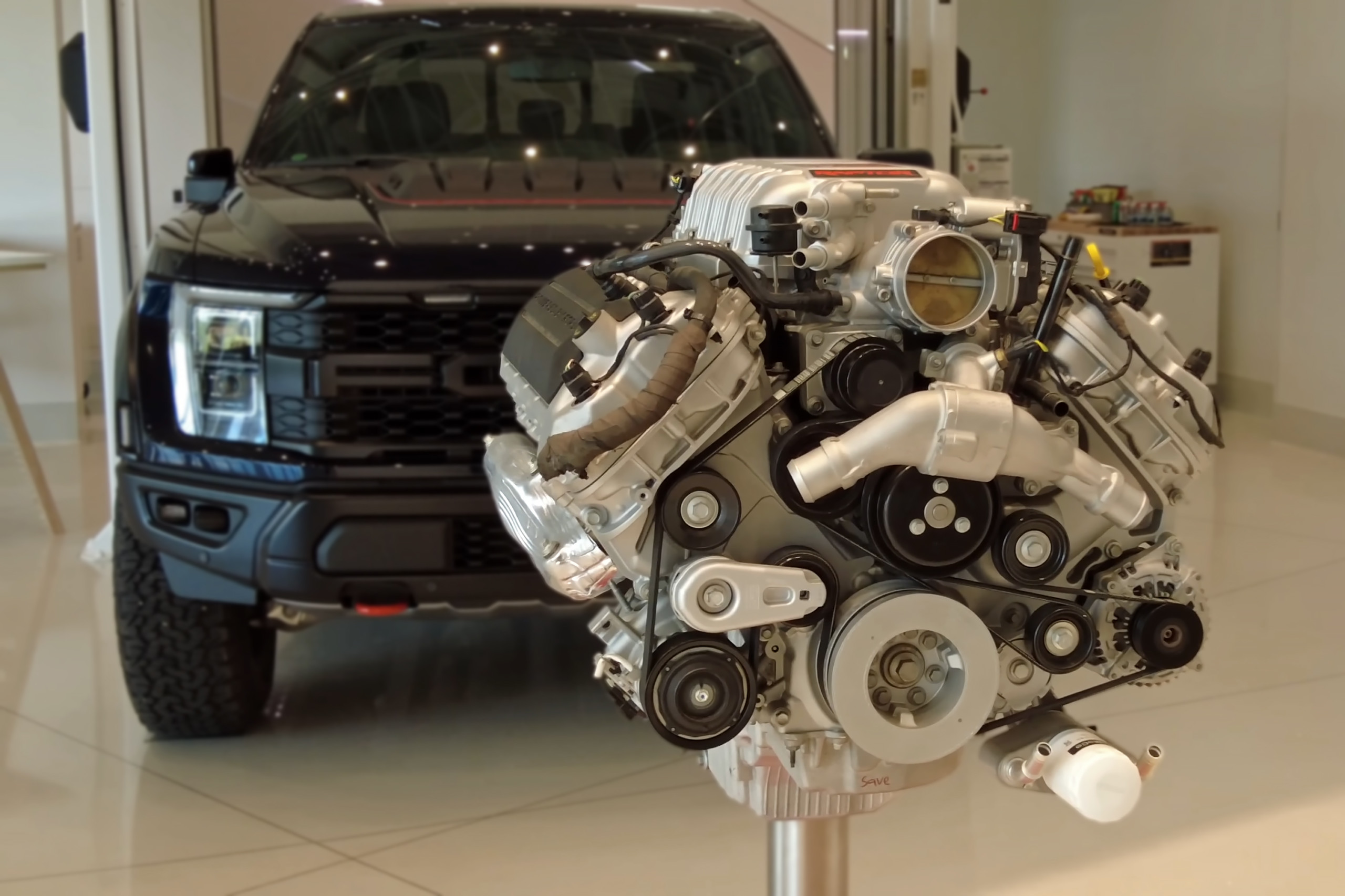 In Jason Fenske’s recent video on Engineering Explained, he gives us a pretty in-depth look at the new Raptor R engine, which is based on the supercharged 5.2-liter GT500. But it’s different, very different, and yet, a bit the same.

With all the electric vehicle announcements making headlines these days, Ford is swimming upstream by launching a new internal combustion engine into the wild. Even though the Dearborn company claims to be committed to carbon neutrality by 2050, Fenske cleverly points out that this means we have 28 years to celebrate!

The new GT500-derived 5.2L Raptor R engine is pretty badass, and the truck isn’t bad either. He also has a lot of torque and a lot of ponies. But is that enough to outrun the Ram TRX’s 6.2L Hellcat?

The beginning of the 5.2L story

Ford’s 5.2L originated with the Shelby GT350 where its naturally aspirated, high-revving flat-crank V8 engine evolved to a cross-plane crank and gained a supercharger for use in the Shelby GT500, which significantly increased power. But for the Raptor R, the engine evolves even more.

The Raptor R is the latest version of the 5.2L engine, with little in common with the original GT350 engine. All that remains in the new Raptor 5.2L are the intake and exhaust valves. “So, yes, the valves” jokes Fenske. Other than that, not much else is shared apart from the engine block.

Although the 5.2L Raptor R is similar to the GT500 and originally appeared in the naturally aspirated GT350, it is essentially an all-new engine with only the valves in common.

Fenske notes that the aluminum block and heads have additional cooling jackets and extra reinforcement, like the panning rail structure and other upgrades around the cylinder bores and head, to withstand all that power. And thanks to that big supercharger, the Raptor R develops 700 horsepower and 640 pound-feet of torque.

Fenske also points out that the Raptor R engine is down in horsepower compared to the GT500, but in torque and torque is available sooner. This is mainly because the GT500 is more of a track capable vehicle where high rpm power is rewarded, hence the higher 500 rpm redline than the Raptor R. Still, 7,000 rpm min is pretty fast for a truck, but still has the kind of torque you want in this vehicle.

One of the new additions to the 5.2L Raptor R engine is the deep oil pan. Since it’s designed for off-road use, the pan provides plenty of lubrication from all kinds of angles as you “blast the dunes.”

The boost is loose

Although top speed and lap times are not a priority for the Raptor R, the torque curve is shifted down by using a smaller supercharger pulley. The designers reduced the diameter from 80.1 to 74.5 millimeters for a diameter that is about seven percent smaller. This allows the supercharger rotors to spin faster in the Raptor than in the GT500, assuming both engines are at the same engine speed.

The Eaton TVS Roots-style supercharger has a volume of 2.65 liters and compresses air to about 12 psi, passing it through an intercooler to cool it before entering the cylinders. Fenske notes that Ford uses a decoupler pulley on the supercharger that ostensibly acts as a one-way clutch to keep crankshaft play from translating to the compressor rotors at low revs.

Another addition to the Raptor R is the rather large Roots-style supercharger with an internal intercooler. The supercharger moves 2.65 liters of compressed air through the engine for a ton of low-end power and torque.

The Raptor R engine also uses plasma transfer wire “sprayed” cylinder liners that Ford has used in production since 2011 with the supercharged 5.4L GT500 engine. Fenske says that one of the big advantages of this plasma spray, in addition to being light and durable, is that it allows more space in the cylinders, thus giving you a little more travel compared to an iron sleeve.

The Raptor R deviates from the GT500 header design and instead uses a cast stainless steel exhaust manifold for durability, which is the name of the game since it is a truck app. It also has a very tight packaging. The downside of an application like a truck, according to Fenske, is that the exhaust has to travel a very long distance, which adds drag, and there’s really no way to avoid that because trucks are long. “Mostly joking, I asked why not side pipes like Mercedes does with the G-wagon?
Ford says they want to make sure the exhaust is above the side rails of the vehicle since this is an off-road vehicle and the exhaust could be pinched. This removes the side pipes.

Ford went with a more durable exhaust manifold for the Raptor R, which is cast stainless steel.

Unlike the base Raptor’s 3.5-liter twin-turbo V6, which uses both direct injection and direct fuel injection, the Raptor R only uses port injection. There are two pumps in the fuel tank to quench the thirst of the 5.2L mill, providing ample pressure to all eight injectors. The difference here, according to Fenske, really comes down to the supercharging systems. All of Ford’s EcoBoost turbocharged engines use direct injection. This allows you to run smaller turbos and gives you better efficient compression. It also gives you better control over transitions and fuel load. “It’s more efficient, more responsive and has better power density,” says Fenske.

“But, I mean it’s a Raptor R; energy efficiency is not the name of the game,” adds Fenske. “It’s literally designed to use plenty of fuel, not to save it. Port injection satisfies the requirements and can be used with a lower compression ratio in a supercharged engine application.

Direct injection is ideal for some applications, especially turbocharged engines, but Ford decided to go the more traditional route with port injection. Let’s face it, it’s not about fuel consumption with the Raptor R!

The cooling system that Ford uses for the Raptor R is of course unique to the application compared to the GT500. One change Fenske points out is that the oil cooler is now part of the engine cooling circuit rather than a separate circuit like on the GT500. “The lower radiator hose has a slot where part of the coolant flow passes through a heat exchanger where the oil filter screws into place, keeping oil temperatures in check,” he says.

And unlike the GT500, which is a low vehicle designed for track use, the Raptor R uses its height and features a deep sump oil pan. Why the deep sump? “Well, this thing is designed to go off-road,” says Fenske. “And off-road riding can be done at all kinds of different angles with different G-forces.”

With the Ram TRX only making a little more power, you’d think Ford screwed up. But the Raptor is a bit lighter and produces a better power-to-weight ratio than the TRX.

The Ram TRX technically has more power, but only marginally, according to Fenske. “It’s only got two more horsepower and 10 more pounds of torque. Why didn’t Ford give the Raptor R three more horsepower for a subtle kick? But with only a two horsepower difference, we let’s talk less than a third of a percent. The weather forecast will make a bigger difference than that, and also keep in mind that engines can be marketed below their true horsepower rating. It seems like Ford didn’t want it all. simply not start a horse war.

Ford’s goal (no pun intended) was to make sure the Raptor R could sing at high revs while blasting the dunes for as long as the driver wanted, says Fenske. “It’s made to crush the off-road world at speeds that would smash your Camry to pieces. So while, yes, it’s down two horsepower from the Ram TRX, it’s also down over 400 pounds. The Raptor R weighs about 8.5 pounds for every horsepower compared to the TRX’s 9.2, giving it nearly 8 percent more power-to-weight ratio.

Some of the other additions to the 5.2L Raptor R are a decoupled pulley on the supercharger to protect against any crankshaft kickback. It also helps with NVH in the vehicle. Ford also upgraded the oil cooler to include a bypass at the lower coolant pipe, so oil temperatures stay under control. The larger supercharger also features a different bypass setup than the GT500, so it can produce plenty of low-end torque.

Even at that high price, Fenske concludes that Ford will likely sell every Raptor R the company makes.