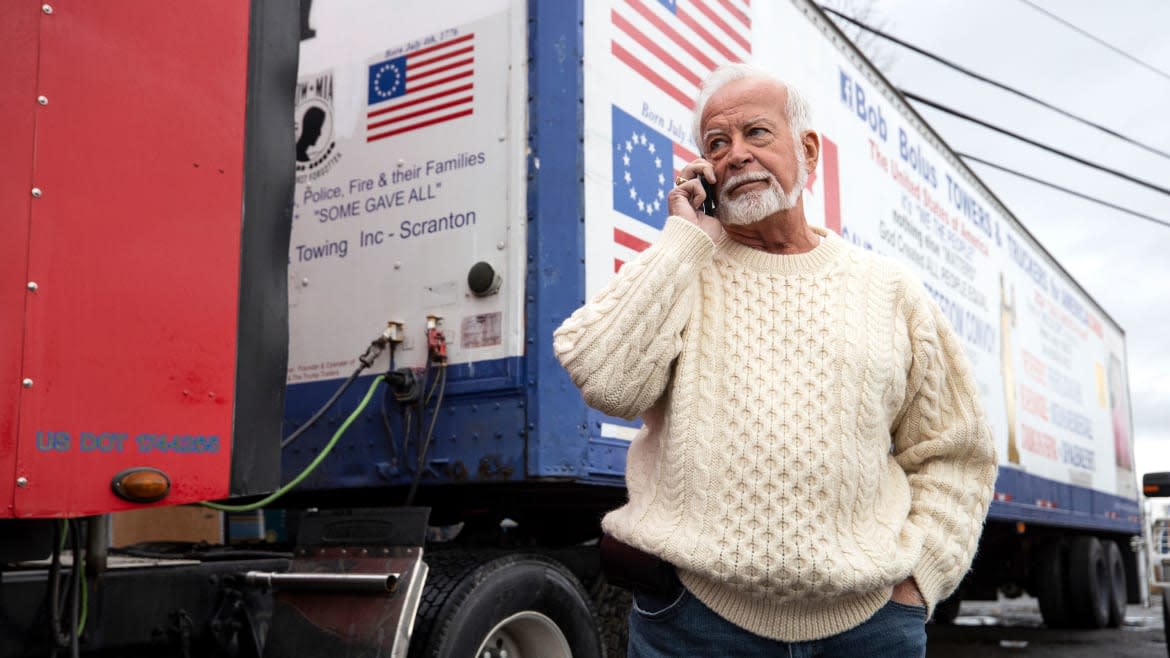 At first, ardent MAGA trucker Bob Bolus swore that his improvised “freedom convoy” making a straight line from Scranton, Pennsylvania to DC this week would “smother” the nation’s capital like a boa constrictor protesting the mandates of vaccination.

But on Wednesday, when his over-hyped convoy turned out to be a lackluster procession of just one, Bolus backtracked, telling The Daily Beast his plans had changed and he wouldn’t try to interfere with the circulation.

“We’re not going to smother DC today,” the Pennsylvania-based trucker told the Daily Beast by phone shortly after noon, before quickly regaining his hopes about a day disrupting Beltway traffic: “Not to say that it wouldn’t be it’s not going to happen in the very near future. It’s just going to be an idea of ​​what’s to come.

This particular wing of the convoy movement was originally scheduled to arrive in the DC metro area around noon, hoping to cause a blockade like the Canadian anti-vaccine mandate truckers’ protest that wreaked havoc in Ottawa until be dispersed by the police. Earlier this week, the Pentagon approved the use of nearly 700 National Guard personnel to help local authorities deal with the possibility of multiple convoys blocking the DC area.

But now, as Bolus confessed to The Daily Beast, his little convoy will just sit “peacefully” in Beltway traffic and not attempt to provoke such a backup.

Wednesday noon, there were only eight vehicles in his group, as reported by Reuters producer Julio-César Chávezwho traveled with the Bolus convoy.

The singular 18-wheeler driven by Bolus has several supporters of SUV and pickup truck driving, but otherwise, according to Chávez, every other large truck on the road drove past the convoy. The group’s trip began with a delay after Bolus suffered two flat tires, ABC 7 News reported.

Earlier this week, Bolus drew press attention to his convoy after telling Fox 5 DC he intended to “shut down” the Capital Beltway, likening his alleged group of truckers to a deadly boa, which “squeezes you, chokes you, and it swallows you – and that’s what we’re gonna do the DC”

The trucker built a small following on Facebook for his pro-Trump antics, but some of his followers seemed skeptical of the convoy idea from the start. “I agree with this cause, but I must warn you that the quickest way to lose this support in the DC area is to disrupt business and people’s movement worse than it already is” , wrote one of those supporters.

A day before leaving for DC, Bolus expanded the protest against the convoy movement’s anti-vaccine mandate to include grievances like the death of Ashli ​​Babbitt, the Jan. 6 Capitol riot, the teaching of “critical race theory” in schools and rising fuel costs.

When asked if his small trailer consisting of a single tractor-trailer and several gas-guzzling SUVs was burning this increasingly expensive fuel unnecessarily, Bolus said no.

“We don’t consider it a waste of gas or anything like that,” he said. “As Americans, we feel we are standing up for our rights.”

Learn more about The Daily Beast.

Do you have any advice? Send it to The Daily Beast here

Get the Daily Beast’s biggest scoops and scandals straight to your inbox. Register now.