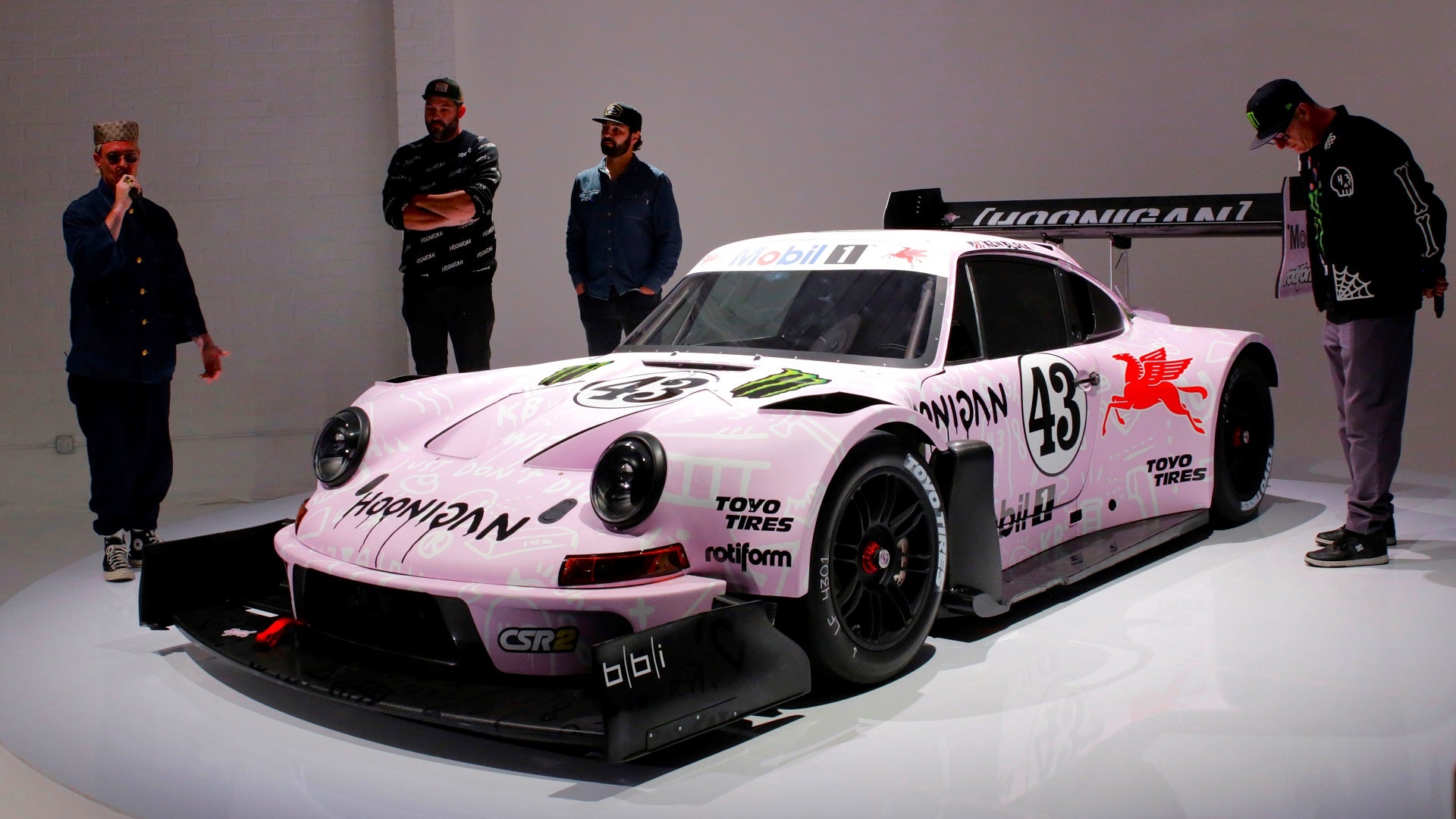 Famous racing driver Ken Block and the Skunk Works at Hoonigan unveiled their new creation in Los Angeles on Monday: a 1,400-hp Porsche 911, nicknamed “Hoonipigasus”. The extremely pink Porsche will compete in the 2022 Pikes Peak International Hill Climb (PPIHC) in June with Block as driver. Alongside BBi Autosport, a Huntington Beach-based tuning and motorsports team, Hoonigan and Block will compete in the famous Colorado mountain race in the hyper-competitive open class with other purpose-built competitors.

This year’s PPIHC is the 100th running of the event and Block’s first race in its peak class. Street artist Trevor Andrew, aka “Guccighost”, designed the bright and wild livery for the special event. Even if the high wing doesn’t stand out in the June race – many competitors use extreme aerodynamic elements to push the thin air off the mountain – the pink livery certainly will.

“Initially I was like, ‘Hey, let’s call it the Hoonipig,’ it’s like the Hoonicorn, but it’s a Porsche, so we’ll call it the pig,” said Brian Scotto, co-founder of Hoonigan. . The race car which made its debut on Monday night channels the legendary Porsche 917/20 “Pink Pig” which raced in the 1971 24 Hours of Le Mans.

“Then we started talking to our friends at Mobil One. If you know a lot about racing and Porsches, you know the (Mobil One) Pegasus lives really well on the side of a 911. Then that relationship started to come together, and that’s where it all became the ‘Hoonipigasus,'” Scotto said.

Hoonigan and BBi Autosport said they were aiming to build an overall winner at Pikes Peak, and it shows in the spec sheet.

“Mid-engine, 1,400 horsepower, all-wheel drive, in a sub-2,400-pound car that generates almost 5,000 pounds of downforce. I don’t know what more we could do to give Ken a weapon to ride and having a great time with me,” said Betim Berisha, founder of BBi Autosport. The car’s huge power comes from a twin-turbocharged 4.0-litre flat-six mated to a Sadev six-speed sequential transmission. custom-tuned and features GPS-enabled height-adjustable suspension under its wheel arches.

That last bit is particularly impressive: BBi took the GPS-integrated data collected during their campaign at last year’s event and factored it into the suspension tuning of the Hoonipigasus. Depending on where the car is on the course, the system can make automatic adjustments to maximize overall grip.

The challenge ahead of us is particularly formidable. With a length of 12.42 miles and an elevation gain of 4,725 feet (ending at 14,115 feet above sea level), the PPIHC is one of the most demanding motorsport events in the world. Aerodynamics, power, grip and suspension tuning are critical to success and require massive spec to compete.

Maybe that’s the appeal of runners like Block. The PPIHC is one of the few internationally acclaimed motorsport events where almost anyone can show up with their own version of an assault beast on high-altitude mountain roads, and potentially give their all. to big budget runners. It’s also one of the most dangerous motorsport events in the world, making those who attempt the challenging, high-speed turns of the course legendary.

It will be cool to see how the 2022 installment of this prestigious, world-renowned event plays out for Hoonigan and BBi Autosport. We also hope to hear more about Hoonipigasus’ high-powered motor and trick suspension in the coming weeks. Although, maybe it’s better to leave until after the event, given that they compete in an open class, almost free for all, where there is no lack of winning imagination among the competitors.