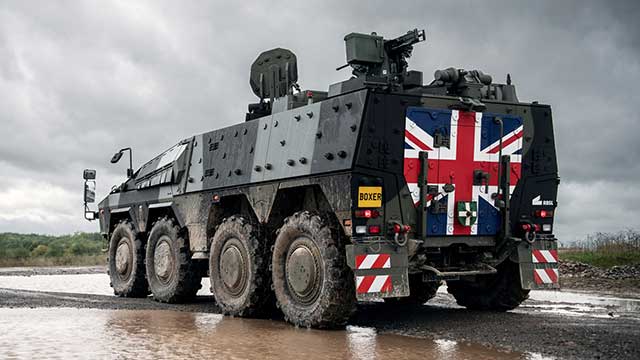 LONDON ($1 = £0.82) — Armored fighting vehicle [AFV] British Army Boxer will be equipped with a new engine. This is a Rolls Royce Solutions UK MTU 8v 199 TS21 engine. The selection was made by WFEL and Rheinmetall BAE Systems Land [RBSL]. These two companies operate the Boxer project in the UK.

The integration of the new engines will take place at the WFEL base. Before that, however, Rolls Royce must produce 523 engines. The next step is to have these engines tuned in Huddersfield by David Brown Santasalo – another Boxer program partner in the UK. This company should integrate the motors into their complete units. Once this process is complete, WFEL will receive the engines for follow-up work.

The other key partner – RBSL will be responsible for assembly and testing. Testing includes checking various systems, such as transmission, engine, and cooling systems. Basically, RBSL carries out these activities from its manufacturing site in Telford.

Only when all these processes are completed can the engines be integrated into armored infantry vehicles. The new engines are part of the British MoD’s Mechanized Infantry Vehicle [MIV] program.

The Boxer program is one of the largest defense programs in the UK. This is a sustainable supply chain test, as multiple companies are involved. They all deliver to England, Wales, Scotland and Northern Ireland.

Initially, London decided to purchase 523 armored infantry fighting vehicles. At the beginning of this year, however, London decided to increase the order by 100 more units. Thus, in the inventory of the British infantry, there will be a total of 623 Boxer AFV units.

Follow us anywhere and anytime. BulgarianMilitary.com has a responsive design and you can open the page from any computer, mobile device or web browser. For more up-to-date news, follow our Google News, YouTube, Reddit, LinkedIn, Twitter and Facebook pages. Subscribe to our newsletter and read our stories in News360App in AppStore or GooglePlay or in FeedlyApp in AppStore or GooglePlay. Our standards: Manifesto & ethical principles.