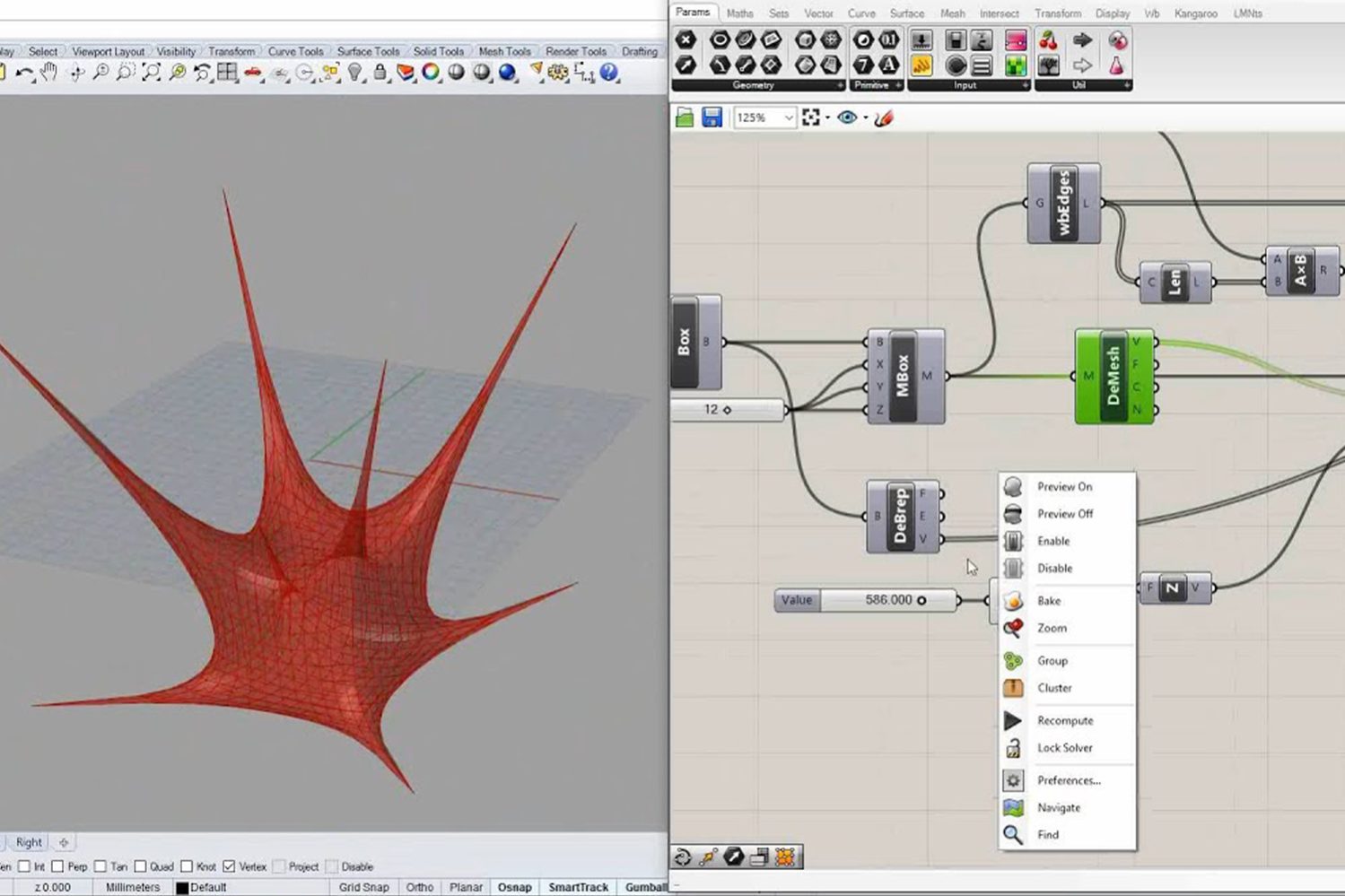 A search engine for forms, optimized and of resolution of constraints

Architecture has come a long way in creating form, from basic natural shelters in prehistoric times to the huge skyscrapers we see today. Modern architecture defined by many primary forms and designs that show structural integrity and minimal simplicity. With the onset of the 21st century, architecture began to transform into a whole new realm, with highly advanced and complex forms made of curves, small angles and walls that seemed to defy gravity. Advances in architecture are made possible by the development of software that makes it possible to visualize complex structures using 3D modeling software. The model geometry is very precise and produces in-context accurate visualizations. One of these software is “Kangaroo”.

What is the kangaroo?

Kangaroo is a live physics engine that facilitates pattern finding, interactive simulation, optimization, and constraint solving. It is a 3D plugin for Grasshopper and Rhino.

Rhinoceros is 3D modeling software that allows designers to create complex structures using 3D models. Rhino primarily uses NURBS and precise geometry to form its shape. On the other hand, Grasshopper is a plugin for Rhino. It allows saving design steps where one can go back and make changes to previous actions, which changes the final output accordingly.

Structural engineers use Kangaroo to produce precise structural solutions for parametric design projects. The software optimizes structural elements such as columns, beams, steel frames, steel rebars, etc., for performance and workability in the design. It also analyzes structural components, reveals errors and resolves constraints. When changes are made to the structure, the optimization and analysis tool adjusts the model in real time. Daniel Piker created it in 2014, one of many popular plugins for Rhino 3D.

Kangaroo is like a physical laboratory where you can simulate the elastic behavior of cables, chains, chords, etc., to predict a shape from shape finding software. But, it does not allow to calculate the formations or to calculate the stresses inside the geometries.

Kangaroo Physics: It will give the user the forces and show them the animation of how the forces react to each other.

Zombie Kangaroo: There is no animation and will only show the results of what is acting on the surface.

Kangaroo uses the particle spring system where a chain is attached to two points, and more minor issues split the chain into different segments. Each segment is made up of “springs,” which are essentially elastic elements that move based on the points on either side. Since the peripheral points cannot be transferred, forces can be applied to the intermediate points and modify their positions.

Similarly, an entire mesh can be created from springs arranged in a square grid of desired columns and rows.

The Kangaroo component must first be placed in the Grasshopper canvas to create a simulation.

It is an input where the generated forces that affect the particles of the 3D model are fed. Forces can be material deformation, user input, or geometric constraints. Kangaroo creates interactions between the force and the 3D model via force vectors.

These are certain points of the mesh that maintain a fixed location. No matter what forces are applied to the spikes, Kangaroo cannot move them. Rhino can transfer points to interact with the running simulation.

If two or more points in the initial input (force objects and anchors) are in the same position (within tolerance), they will be joined and treated as a single particle by Kangaroo.

Perturbations in the simulation can become unstable when dealing with particles as Kangaroo tries to represent continuous functions in non-continuous time steps. This can be improved by using softer springs or increasing spring damping and drag so that actions occur in shorter time intervals, allowing for more calculations for the same amount of motion.

Perturbations can also be reduced by increasing the number of calculations between observed particle interactions.

In the future, new strengths should be added to the latest version, such as:

One of the downsides of Kangaroo is that it has a complex learning curve where outputs can have errors. There are also risks of system crashes if the entries are wrong.

Since the open source software is accessible to students and professionals. Since the appearance of 3D modeling software; there has been massive progress in architecture; where complicated shapes made with parametric design. Kangaroo software is an essential tool for architects and structural engineers to realize a complex structure with physical precision. Having software like Kangaroo at their disposal allows them to be fully creative when creating forms and trust them to work. With Kangaroo, creating such conditions and implementing them in real projects pushes the boundaries of architecture and design.

The series explores various software used around the world in the 21st century, and this modeling software has proven to revolutionize architecture by exploring the unexplored. They facilitate the process by finding new ways to build through a mix of computational methods to support futuristic designs. The series highlights software and tools such as Rhino 3D, Grasshopper 3D, Ladybug, Honeybee, Pufferfish, Kangaroo, etc.

Learn about 10 trending Grasshopper plugins in the AEC industry.

Incidentally, if you are curious to deepen the learning of parametric design and calculation tools, you can consult the workshops of PAACADEMY. These workshops are 7-session studio workshops dedicated to exploring computational design capabilities applied to architecture and design.