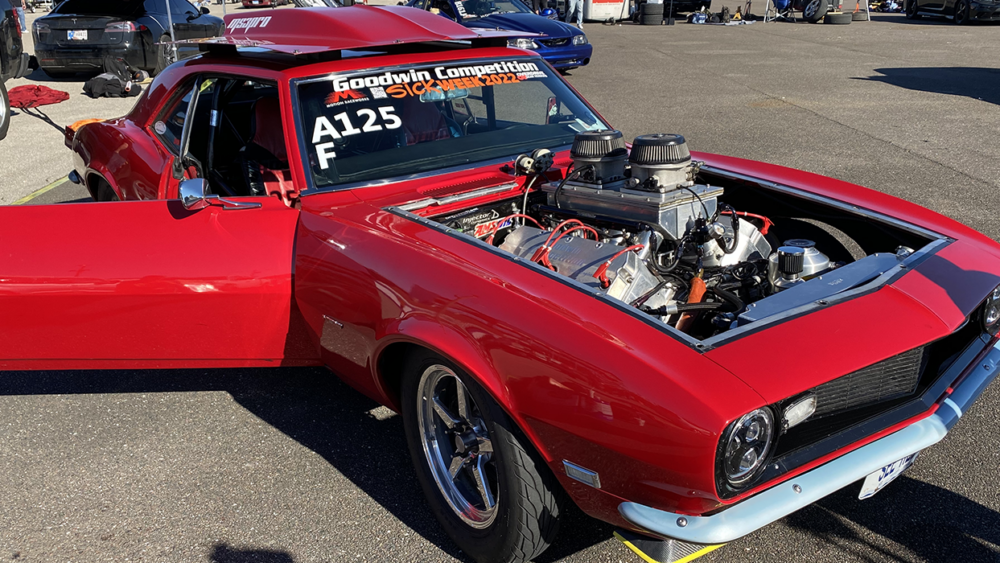 Continuing our sick week recap of the awesome engines seen at the Florida drag-and-drive event, this week we cover the ins and outs of the 709 cubic inch Hemi engine built by James “Doc” McEntire Goodwin Competition.

We obviously noticed James’ 1968 “See Red” Camaro early on in the event, as it’s a gorgeous car and an even more impressive engine, but that wasn’t until day three in Gainesville, FL. at Gainesville Raceway we had the opportunity to speak with James about his setup. Running in the naturally aspirated class, James’ engine is a bit more unique when it comes to pulling and driving power.

“This is a naturally aspirated car in a horsepower world,” McEntire joked. “We are delighted to be as competitive as we are.”

This level of competitiveness is due to Doc’s long-standing involvement in drag-and-drive, but also Goodwin Competition’s fully Hemi-based engine. Goodwin Competition, owned by engine builder Todd Goodwin, is located in Ormo, WI. The workshop started over 30 years ago and today builds racing engines for a number of applications. The crown jewel, however, is the shop’s custom Semi Hemi engine, which can be built from 650 cid to 820 cid.

“We make the engine completely out of machined aluminum,” Todd Goodwin told us a few years ago. “The blocks, heads and most of the accessories are made from machined aluminum, so it’s pretty exciting to build something a little different from what everyone else is doing.”

Being a little different is exactly what Doc was looking for as he increased his involvement in drag-and-drive and came to Goodwin Competition nearly 10 years ago for one of their Semi Hemi engines.

“Todd Goodwin is a great engine builder and he’s done a great job for us,” McEntire said. “Our engine has an all-billet 5,000-inch bore spacer block. It has a 5,000″ stroke and a 4,750” bore, and it displaces 709 cubic inches. It’s super tough. It’s something Todd Goodwin dreamed up and brought to me in 2013 and we did our maiden voyage in 2015 and started breaking several transmissions from there – that’s some good power!

Of course, if you know or have spoken with Doc or Todd, then you know durability is important to both. As Doc walked us through the build of the engine, it was very clear.

“Durability is the most important thing,” says McEntire. “For example, the camshaft is supported by nine cam roller bearings. The camshaft specs are kept in a vault at Fort Knox, so I can’t tell you any of that.

These valve train components sit inside huge CNC-ported cylinder heads, which Doc says are water-jacketed and reverse-flow fed, so water enters through the block and exits through the heads to stay completely cool.

“It’s basically a Hemi-style cylinder head, but the combustion chamber is a flat chamber,” he says. “It’s not like a typical Hemi-style cavity. It was designed with the geometry of the valve train in mind, so there is no deviation. Everything is as straight and true as possible to take a lot of stress off the valve train, because on high-lift, naturally aspirated camshafts cars always fail in the valve train.

Moving from the top of the engine down, Doc told us that the engine has Dailey Engineering’s 5-stage dry sump lubrication system with an external oil pump, which helps prevent these engine failures. valve train to occur.

“I use a dry sump lubrication system with an external oil pump drive that creates vacuum in the crankcase and oil for the engine,” he says. “We use a 5w50 oil, and we have had great luck with the way the lubrication system cools the valve train. There are actually dams built into the cylinder head that hold the oil in, so the valve springs are literally bathed in oil continuously. It’s a really unique design for the endurance-style drag-and-drive stuff we do.

McEntire’s Billet Hemi also features a lightweight billet sheet metal intake manifold with linkage and dual GC/Pro Systems Dominator 4-barrel carburetors. Unlike many other competitors who might be asked how much boost they’re using, McEntire doesn’t have to answer those kinds of questions. On the contrary, people often ask how many compression ratios it uses.

“People ask us all the time what compression ratio we use,” he says. “I tell them, ‘If I tell you you’re not going to believe me.’ That’s over 15:1 and we use it at the pump on our roads.When we run full throttle we put good fuel in it due to the cylinder pressure created by the shaft design The efficiency of the cylinders of this engine really improves as it increases engine speed.It contains a 6500 rpm stall converter, so when walking down the street it does not create any cylinder pressure.

To help James manage this massive engine and its power, he relies on an MS3Pro ECU from DIYAutoTune / Hoffman Innovations Network, which allows him to manipulate the engine in so many ways.

“We were really lucky and had great support from Jerry Hoffman and his entire tech support team,” McEntire says. “I have a good friend of mine for years who rides with me named Jeff McConnel who does most of the tuning. When driving on the road, we can tweak things like fueling and ignition timing to optimize fuel economy on the street. »

If you’re curious how much horsepower you get over 700 cubic inches, Doc says the engine hasn’t been to a dyno to get an exact number.

“People ask us that all the time,” he says. “This engine, unfortunately, has never been on a frame or dyno. We estimate it produces between 1,200 and 1,300 horsepower. We had a smaller version of this engine when we put it on the street for the first time and it was over 1200 horsepower. With this one we went up to the biggest crankshaft, so I’m guessing it’s somewhere in that neighborhood. The track is the best dyno.

“This car holds the world record for fastest and fastest naturally aspirated tram and we set it in 2019 at [email protected] mph,” McEntire says. “Our goal this week is to reset that record. We’ve struggled with a few gremlins electronically in the car. We’re looking forward to South Georgia Motorsports Park where we know the track surface is going to get stuck and this car is going to reset the record.