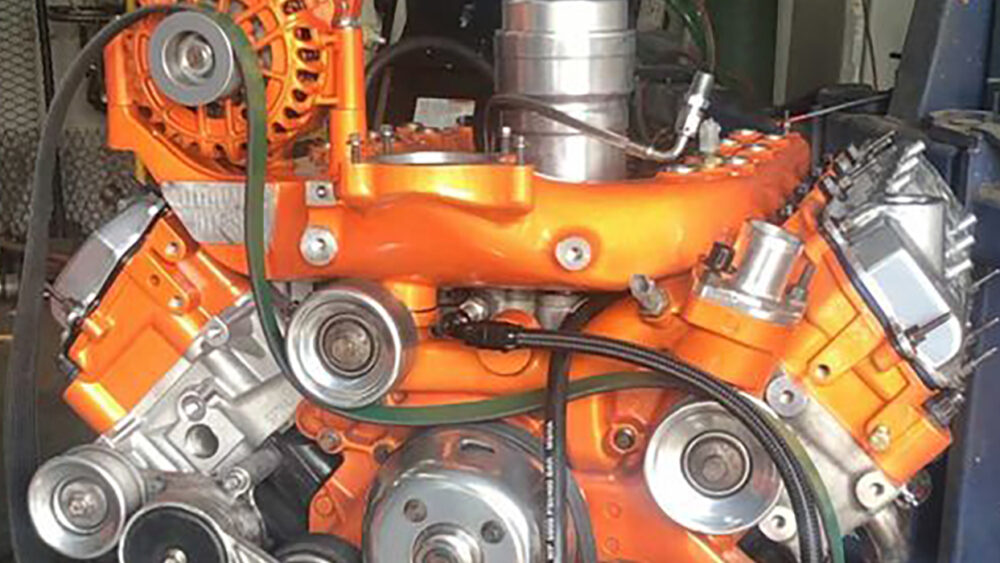 Building an engine is an investment not just of money, but of time. Hours and hours go by in a fully functional and capable engine, with the occasional blood, sweat and tears. Sacrifices aside, the finished product is almost always worth the work put in.

For some, part of that fulfilling feeling is documenting the process along the way. Tyler Wood is one of those builders. With hours of content posted to its Youtube channeltons of Instagram posts and a whopping 5,000 individual photos of parts, components and the build process, he has more than a few ways to show off his diesel build to anyone interested.

Wood started his career in the automotive world earlier than most, when he started racing dirt bikes at the ripe old age of 4. Over the next 14 years, he acquired a vast knowledge of mechanics by repairing motorcycles and family vehicles with his father. When he was old enough to start driving, he was introduced to the world of diesel via his very first vehicle – an F-250 with a 6.0L Powerstroke engine. He now works as a mechanic at Southeast Diesel Supplywhere he continues to perfect his art.

After a short stint focusing on street bikes and Cobra Mustangs, Wood returned to the diesel realm in the summer of 2019, when he traded in his ’03 Cobra for another F-250 King Ranch with a 6.0L Powerstroke.

“I took the truck with an ‘integrated’ engine, which I unfortunately found was not as assembled as I had hoped,” says Wood.

Within a week he had already torn most of the engine apart to start upgrading it further. The first step was to make phone calls to SoCal Billet Inc., where Wood ordered an S400 package including a T4 setup and intercooler hoses along with Warren Diesel 250cc/100% on injectors which replaced the stock 190cc / 75% on injectors and turbo.

After installing a heavier 5R110W drivetrain from Wyse Auto LLC, Wood quickly got into a few races against local riders. Soon after, news started spreading about his Powerstroke dubbed ‘Heart Breaker’. The last race resulted in a blown radiator hose, which was later found to be caused by a “catastrophic head gasket failure”.

Fast forward 6-8 months, and Wood finally got all the parts he needed to fix the bad heads and head gasket failure.

“That’s when it became real,” he says. “I realized the head gaskets were in a lot worse condition than I thought so I called Jared Alderson at Kill Devil Diesel and ordered a new set of aluminum o-ring heads. We discussed several specs and opted to set the valving recession deeper than usual so we could party going forward.

After diagnosing other problems with the engine, including a seized tappet and premature wear in the main journal and connecting rod bearings, Wood sent the block and baseplate to a local machine shop to be repaired. be cleaned and checked for any other abnormalities. Everything in the engine compartment was polished, powder coated or ceramic coated.

After some conversations with others in the diesel industry, a game plan was put together to strike a good balance between a street and racing truck. It started with ARP main studs after a line boring job and stock bearings were used throughout, along with a Callies Stage 2 crankshaft.

“For the hard parts we opted to use the pistons that were originally in the engine with a set of Callies Assassin rods. We didn’t need to modify the piston as it was a cam drop and needed no piston modification to work even with all specs set on a factory standard.Mounting up we used the aforementioned KDD aluminum o-ring heads with all gaskets d Ford Motorcraft plant.

On the top end, KDD push rods and XDP rocker bridges were used. All of this has been topped off with a new improved package of 350cc/150% over conventional Warren Diesel fuel injectors. Warren Diesel also supplied the high flow standpipes which are paired with a twin HPOP KC Turbo on the oil side.

“Fass Fuel Systems helped update the lift pump with their newly designed pump to help keep the beast fueled with enough fuel to deliver the power we were looking for and keep it quiet,” says Wood.

The 220 gph lift pump offers advanced filtration benefits like Fass’ patented air/vapor removal process, which effectively extends the life of diesel injectors. Powerstrokes are widely known to have injector failures, which makes this addition a sensible one. Braided Nomex fuel lines and an XDP sump and regulated return complete the fuel system.

The unique turbo air setup consists of an S476/87/1.0 forced induction T4 and head-tuned Odawg S3R intake manifold, and a Young’s Fabrication 5” cold air intake. Other additions include a Mishimoto intercooler and radiator.

Overall, Heart Breaker makes just under 1,000 horsepower. Weighing in at 6,900 pounds, Tyler was still able to put in a respectable 7.14 at 96 mph in the 1/8th mile. While the truck is both a beast on the road and on the track, Wood intends to do more soon.

“Ironically, I’m still dissatisfied and I want more,” he admits. “Currently, plans are in place to ditch HEUI injection and move to common rail. This will be a huge factor in producing more power and being accessible at these higher power levels.

Diesel of the week is sponsored by AMSOIL. If you have an engine you would like to feature in this series, please email Engine Builder Editor-in-Chief Greg Jones at [email protected]