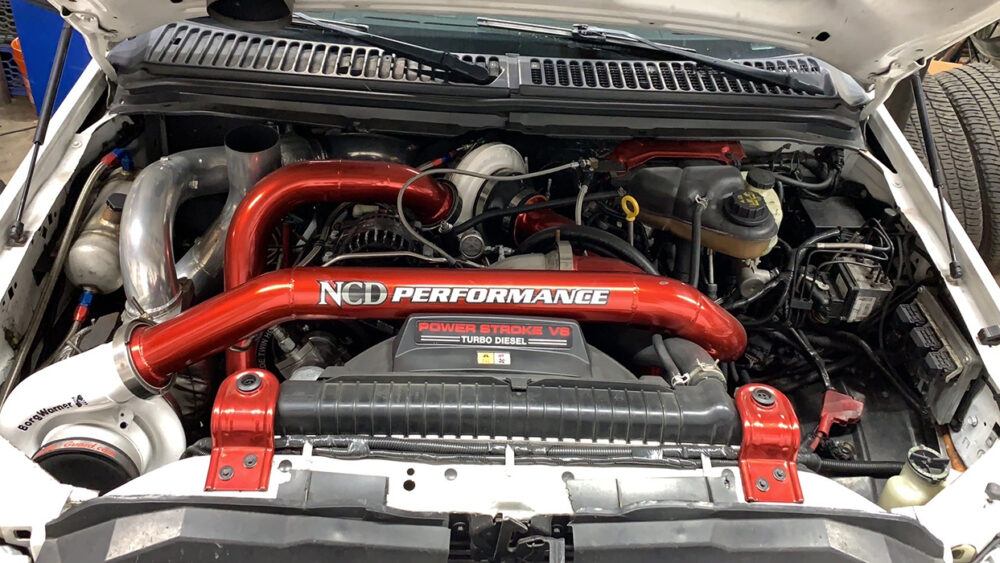 Powerstroke is the name of the game for Tyler Brancifort, diesel enthusiast and business owner from Middletown, CT. Ever since he bought his first 6.0L at 16, he’s been hooked.

“I haven’t tested it yet because it probably has the worst configuration for the test,” says Brancifort. “But it has an S475 on the stock valley charger and it makes good power, I use it pretty much just for towing.”

“There’s not a whole lot of benefit to using a 6.0L when everyone’s using common rail now,” he says. “And not everyone knows how to fix problems with these engines, like bad head gaskets, but basically they’re nice little engines that can produce decent power if you put in the time.”

Engine has stock block and crank, Stage 2 RCD camshaft, coated. fly-cut, lipless RCD pistons, and a set of stock RCD 6.0L rods. The titanium valve springs are also from RCD. The heads were carried and o-ringed by Central automatic machine and the pusher set was from Smith Brothers.

‘It has 395/400 RCD hybrid injectors and an RCD Stage 1 bumper high pressure oil pump in the rear with my NCD slash elite dual pump on a belt in the front which runs an aluminum style pump’ 03,” he said. “It also contains a Maryland Performance Diesel remote oil cooler.”

On the air side, Brancifort has a Borgwarner S475 in the valley and an atmospheric turbo S591 T6, accompanied by a nitrous Nitrous Express kit.

Last year, the truck produced 1,380 horsepower on the dyno. On fuel, it pumps out around 1,050 horsepower, with around 300 more horsepower when sprayed with nitrous. Brancifort’s best pass in the truck was 10.82 at 132 mph in the quarter mile, and that time should drop since the truck has lost weight.