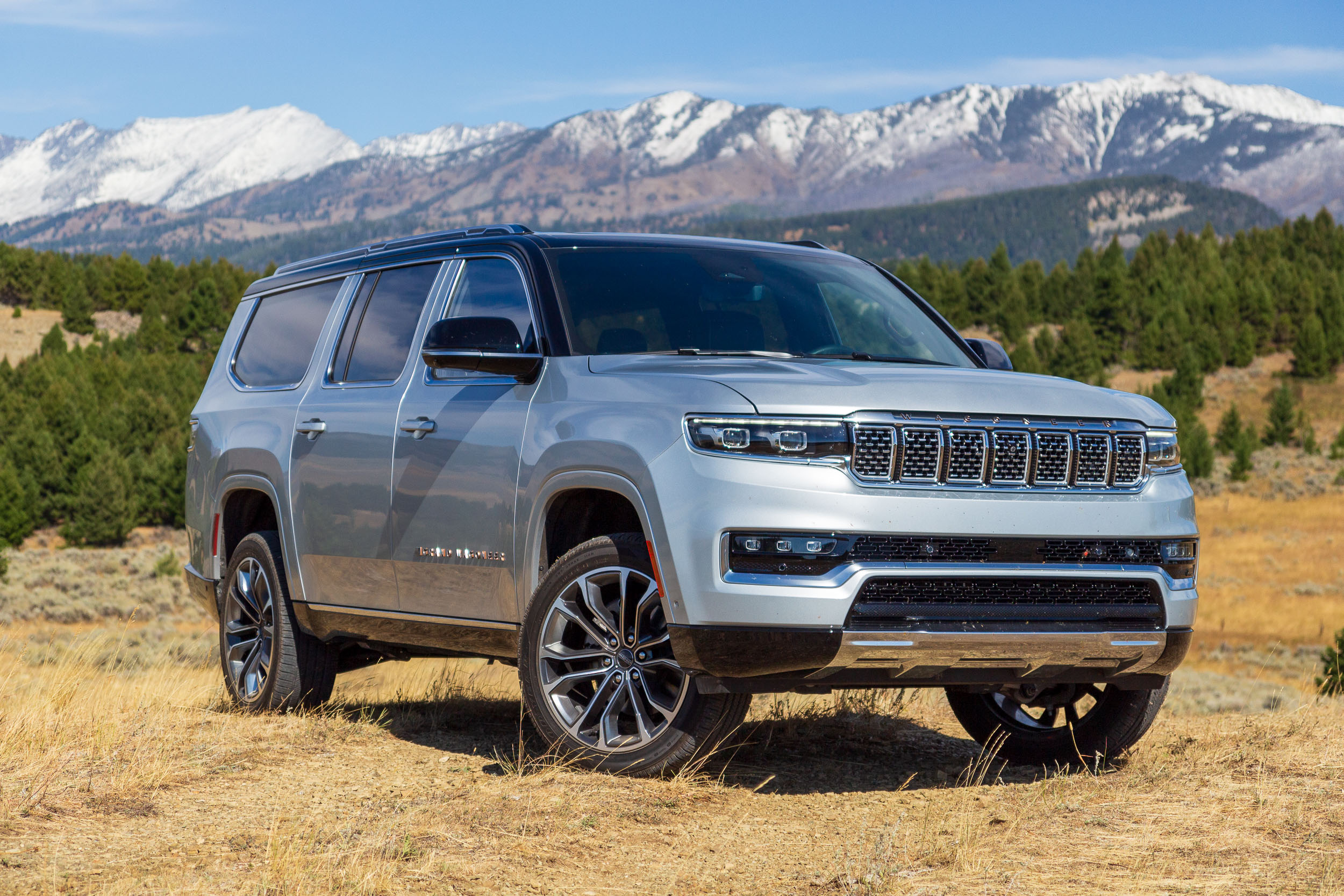 To create the Wagoneer L and Grand Wagoneer L, Jeep really only had to make one change. Instead, it did two: everything under the hood and everything around the back of the B-pillar.

A new engine family takes its place under the hood, while everything behind the driver stretches out. This adds 7 inches to the wheelbase and one foot to the overall length to maximize cargo and passenger space.

Jeep took us to Bozeman, Montana, to drive the two Ls. This is big sky country for two big SUVs. Starting at around 5,000 feet and climbing up the mountains around town was perfect for testing the performance of the new engines. Crazy Mountain Ranch—formerly a retreat for Marlboro Cigarette Contest winners—provided the views, dirt roads, and cattle tracks.

We’ll start with the new engines, because, frankly, they’re the biggest surprise. A long-wheelbase model is nothing new — GM and Ford have been doing it for decades with their large SUVs. But a new engine family in 2022 is a big deal.

The 3.0L inline-six is ​​called Hurricane, likely because of the pair of turbochargers that blow power into the intake manifold. Wagoneer L gets a version of the engine that develops 420 horsepower and 468 pound-feet of torque.

The Grand Wagoneer L gets some of its greatness from more boost pressure, forged pistons and a second fuel pump to produce 510 horsepower and 500 pound-feet of torque.

In the L models, only the new 3.0L I6 engines will be offered. Standard-length trucks will receive the remaining V8s in inventory from last year. In the Wagoneer, the 3.0L six-cylinder replaces a 392-hp 5.7L V8, while in the Grand it’s a 471-hp 6.4L.

Jeep claims the straight-six will deliver “one to two” better miles per gallon on the combined cycle. The number may seem like splitting hairs, but when your V8 is only capable of 15 miles from a gallon of gas, the fuel savings add up.

With the price topping six figures, we don’t think it’s fuel economy that buyers care about with the new engines anyway. That’s the feel of new power plants, one area where they deliver.

The standard 420 horsepower of the Wagoneer L is enough to move this workhorse quickly. The engine is torquey and responsive, but more importantly, it’s smooth. Stellantis has done a great job with its Hemi V8but the I6 and its natural balance suit this luxury SUV much better.

On the highway, the engine is barely audible, wind noise also kept to a minimum thanks to the laminated glass. Mash on the gas and the eight-speed auto drops gears until the I6 sings. Happy to turn at the red line with sounds that remind us why BMW and Mercedes-Benz are such fans of this same layout.

The high yield hurricane is more or less the same. The extra 90 horsepower and 42 lb-ft make the Grand Wagoneer L faster than the Wagoneer L. Much faster, thanks to nearly 100 more horsepower than any of its competitors. (We do not count the 682 horsepower Cadillac Escalade-V as one of these competitors.)

Toggle Sport mode on the center console and computer quickens shifts and keeps the revs high, making it more engaging than anything this size has a right to be.

Chassis tuned for comfort, not for carving

The handling won’t live up to that promise of power, although that’s hardly a surprise. The base Wagoneer L’s coil springs and the Grand Wagoneer L’s semi-active pneumatic standard are geared more towards comfort and ride quality.

Adapted to new chassis characteristics – more weight and more length – the pair of Ls are solid, serene cruisers that do next to nothing to give their truck-based underpinnings. But they will never be confused even with a three-row crossover when the road gets twisty.

To create the L, Jeep says it had to design a new rear floor, rear ladder structure, rear tub and new cargo floors. The frame needed a new center rail and rear extension, and the third-row seat mounts and bolsters are also new. There’s a lot of new metal, worth around $3,000 based on sticker price increases.

Seven inches of extra length from the L goes between the B-pillar and the rear axle, as with the Chevrolet Suburban, which pushed the rear axle well behind the rear door frame. The Wagoneer and Grand Wagoneer L both get a longer rear door, with the new door taking advantage of the extra length to give rear passengers more room to get in and out.

For the sake of thoroughness, I climbed to third despite a bad left ankle. Even injured, getting back there was easier than climbing into the rearmost seats of the standard-length vehicle. And I didn’t rip my jeans on the way out, which I can’t say about the standard-length Grand Wagoneer.

Surprisingly, there is no additional passenger space for the two rear rows. Legroom is the same, headroom in the third row has a tiny change, and that’s it. The changes here are aimed at making entry and exit more accessible, which they accomplished.

Cargo space is the L’s other primary function. Behind the third row of seats, the Wagoneer L and Grand Wagoneer L transform from ready for upright carry-on to big enough to lay down and take a nap.

It’s best-in-class for cargo space behind the third row and the same goes for overall passenger volume. To help you utilize that space, all L models feature six cargo tie-down loops, and Grand Wagoneer L models feature a cargo management rail system as standard. The roof rack is longer on L models, but at just 150 pounds, the maximum capacity doesn’t change.

The extra wheelbase only makes a slight difference to towing. Two-wheel-drive Wagoneer L models can tow up to 10,000 pounds, as can the short-wheelbase model. A 4×4 L can tow up to 9,850, with the Grand Wagoneer L at 9,450 pounds.

The latter two weigh 150 and 350 pounds less than a standard wheelbase model. Even the lowest figure is best in class, so it’s still the choice for SUV buyers who want to shoot.

Payload suffers from L stretch. A fully loaded Grand Wagoneer L Series 3 has a payload as low as 1,330 pounds. Divide that into seven or even six passengers, and you may be out of capacity for cargo or the weight of your trailer tongue.

The official off-road track for the event was limited to SWB models only. That didn’t stop us from taking the Grand Wagoneer L on dirt roads and ranch trails as well as real cow trail.

With the air suspension raised for Off-Road I mode (about 9.0 inches of clearance), the GWL had no problem rolling between the cows on the rocky, rutted trail until one of our sessions. pictures available.

The approach, departure, and crossing angles are all slightly lower due to stretch, but that cuts your hair. If you’re willing to ride it, the L should be able to do it.

On washboard gravel, the stretch revealed no new creaks, rattles or flex in the chassis. Really, the gravel and hurricane HO made me wish for a rear-drive mode so I could hook the tail of this beast. Instead, I had to take the yacht out for four wheel slides.

The Wagoneer L and Grand Wagoneer L, like the standard wheelbase models, are exactly what they need to compete in this class. Massive, strong, powerful and spacious, with the ability to tow a boat or camper behind them.

L models give you more cargo space, make it easier to get in and out, and debut a stellar new engine. Which makes Ls a first choice.

Grand Wagoneer Concept: Jeep once again gives us the luxury of a big SUV