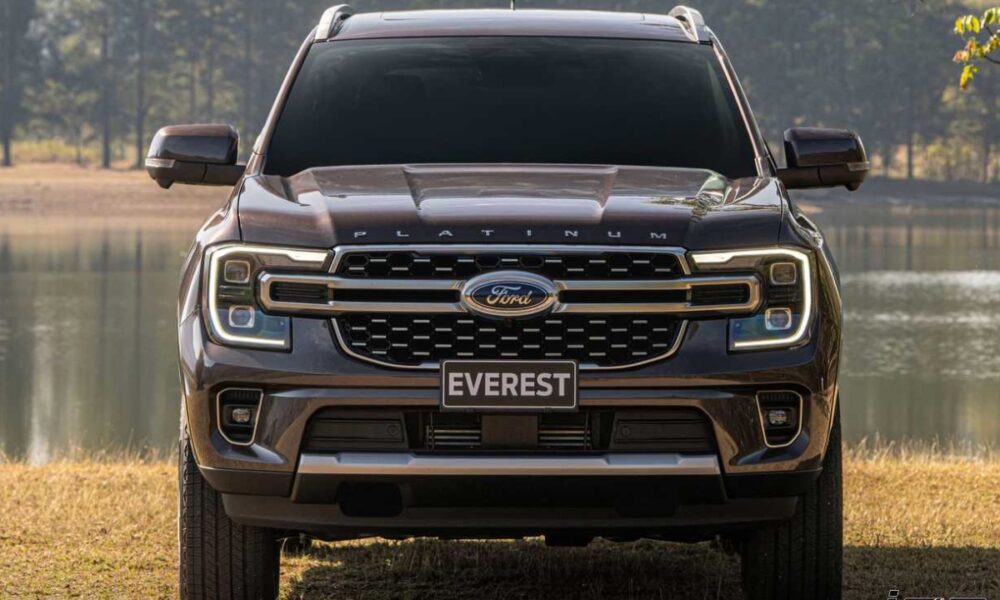 American SUV manufacturer, Ford has officially launched the new third-generation Everest (new Endeavour) for global markets. The 2023 Ford Endeavor comes with an all-new design and interior along with new engine options. As a reminder, Ford does not sell any products on our market. The company recently halted its manufacturing activities in India and closed operations at its factories based in Sanand and Chennai.

The SUV comes with a flat hood and a flat front profile, as well as a completely redesigned bumper featuring a larger air intake, new fog lamp housing and a massive skid plate silver finish. The side profile looks simple and keeps the profile flat and square. It gets longer rear doors for better access to the rear seats.

The 2023 Ford Endeavor rolls on chunky 20-inch alloy wheels. It comes with huge flared wheel arches with thick plastic liners, while the massive sidestep is also offered for easy exit and entry. The rear also looks simple and less busy. It features C-shaped LED taillights, a roof-mounted spoiler and a high-mounted brake light.

The interior of the 2022 Ford Endeavor comes with massive changes. It comes with an all-black interior, leather upholstery for the seats, steering wheel and gearbox. The SUV gets the SYNC4 infotainment system. The lower spec variants come with a 10.1-inch touchscreen while the higher variants feature a 12-inch touchscreen. The SUV also offers a digital instrument console, an 8-inch unit in lower spec variants and a 12.3-inch unit for more expensive modes.

The engine lineup includes the new 3.0-liter V6 turbodiesel engine that powers the new Ranger. Depending on the market, the new Endeavor or Everest could also get a smaller 2.0-liter diesel engine. The body-on-frame SUV will also feature the 2.3-liter EcoBoost engine. Transmission choices will include a 6-speed manual and a 10-speed automatic.

Ford claims the new Endeavor offers a fording capacity of 800mm, while the functional roof can support up to 350kg. The SUV is equipped with a 360-degree camera, matrix LED headlights, adaptive cruise control and automatic evasive steering assistance. The 2023 Ford Endeavor or Everest will be offered in Sport, Titanium and Platinum versions.