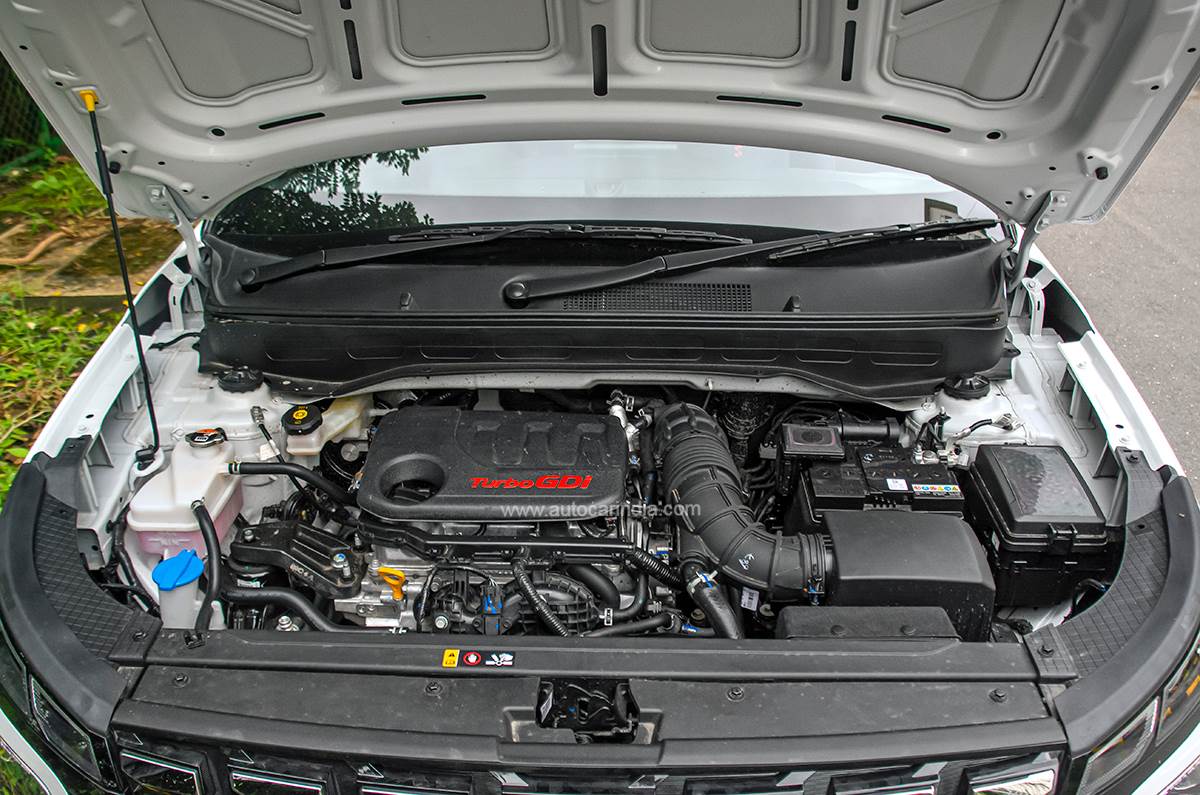 Hot on the heels of its recent facelift, the Venue compact SUV gets the sporty N Line treatment.

Following in the footsteps of the i20 N Line, Hyundai has introduced the “N Line” treatment to its compact SUV, the Venue. With the facelift launched not so long ago, the place has undergone significant changes both outside and inside. However, with the N Line, Hyundai aims to up the fun-to-drive quotient of the compact SUV. Did they succeed?

Just like on the i20 N Line, the powertrain has not changed, but the Venue N Line is only available with the turbo-petrol engine and DCT gearbox, which develops 120 hp and 172 Nm. So it is fast, but sadly there’s no manual or even iMT like the i20 N Line that increases driver engagement. However, the paddle shifters for the 7-speed DCT gearbox make amends, and you’d want to make full use of them as the gearbox isn’t the most responsive when left to its own devices.

Gear changes, while smooth, are delayed and you often find yourself waiting for the right gear, especially when downshifting. So paddle shifters are a saving grace and also keep you engaged, which is the whole point of an N line.

Engine refinement levels are good, power delivery is linear and, just like the standard version, the N Line also has drive modes that alter the overall powertrain response, with ‘Sport’ being the most impatient of the lot. 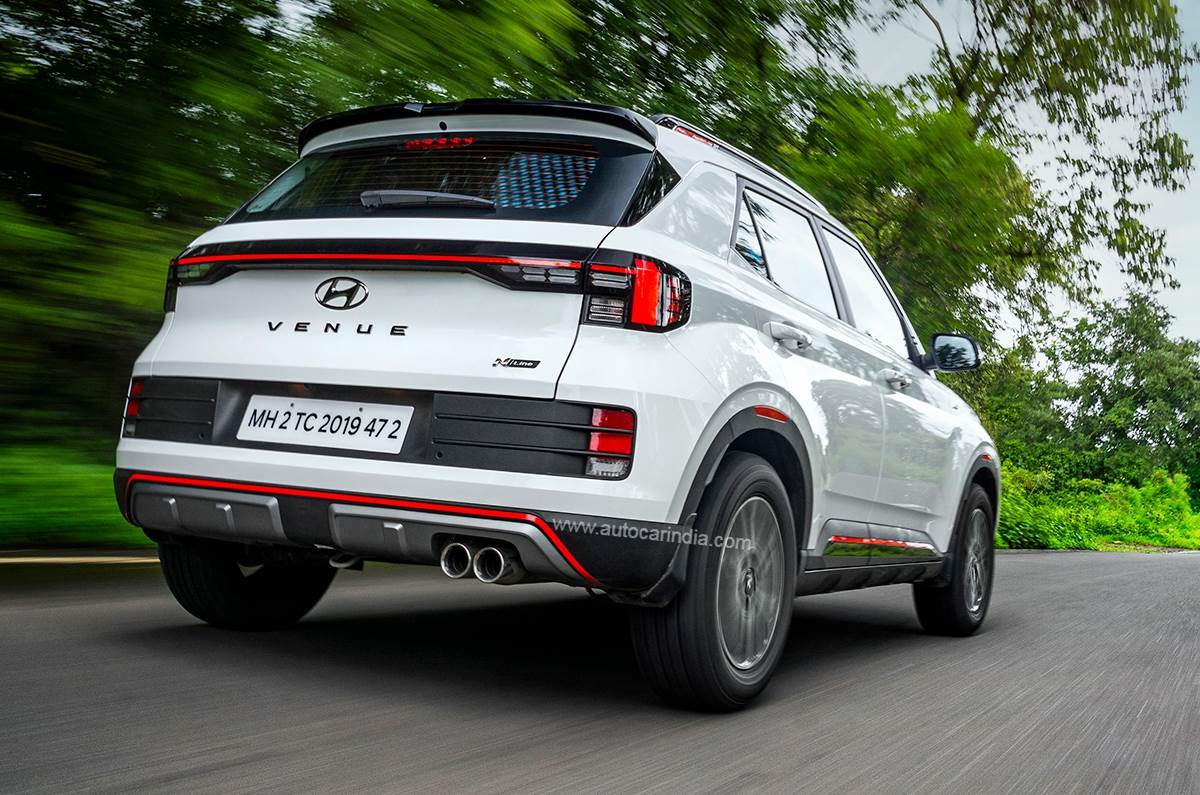 The Venue gets N Line badging on the grille, trunk and front fenders.

As we saw with the i20, in keeping with the N Line theme, the exhaust has a throaty tone, but as you get faster you’ll want more. It won’t be surprising to see some owners flock to aftermarket stores and websites to amp up the buzz of the twin chrome pipes.

So while the engine remains unchanged, the suspension has been tweaked for more stiffness and better cornering. To quote numbers, it gets 34 percent more damping force, which makes it better around a set of corners, but it hurts low-speed ride quality. Sharp, hard bumps at city speeds are felt inside the cabin, but stability at triple-digit speeds has improved. 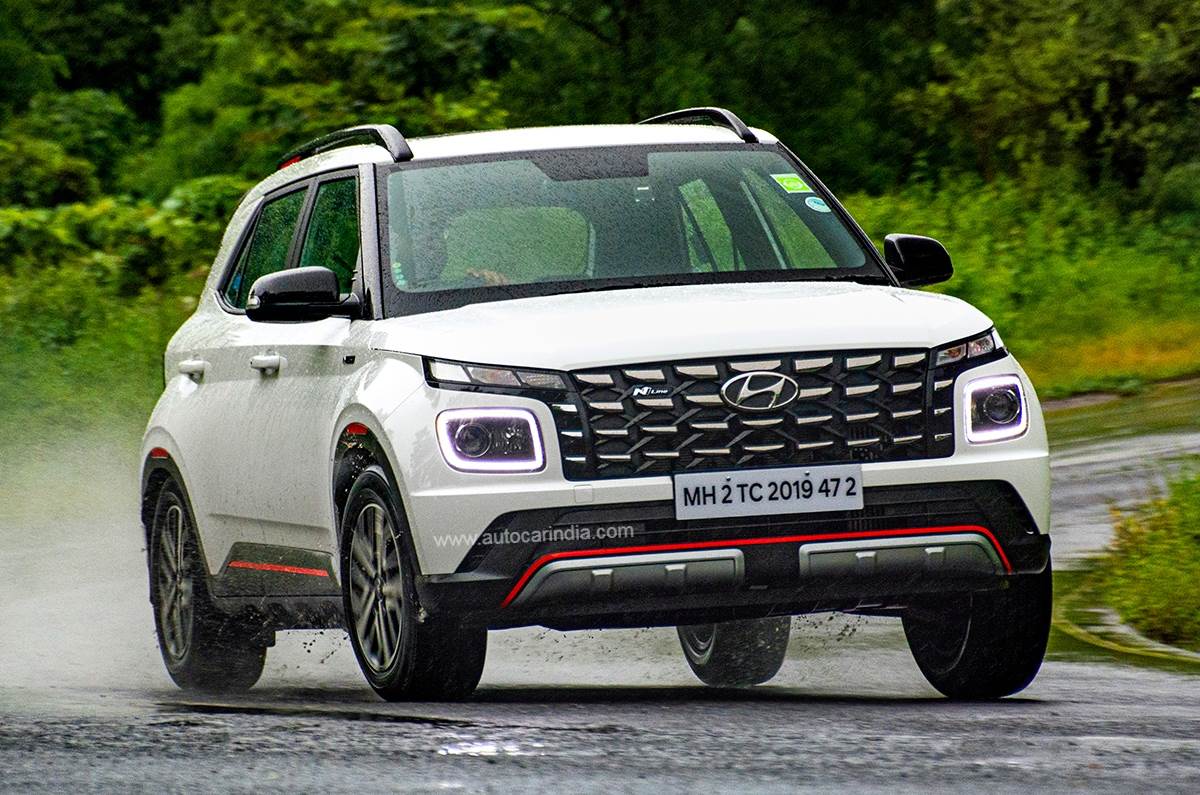 In long twisty corners, the car feels planted and body roll has also been reduced. Not that it’s prominent on the standard car, but on a spirited ride the N Line will feel more confident.
The steering, however, isn’t very engaging and even though the weight can be tweaked through the drive modes, it still doesn’t feel cohesive or sensational. In sport, there is weight, but no return. What helps are the brakes, since the Venue N Line gets discs in the rear. Braking as a result is noticeably better than the standard Venue and bite is strong, and pedal feel is natural too.

On the outside, it gets the typical red and black treatment with plenty of N Line badging. White might not be the ideal choice if you want to show off its ‘N’ credentials, so the Thunder Blue is a better bet here. However, the red highlights are rather easy to notice on the white car. The front bumper gets a big stripe down the bottom with “N Line” badges on the grille. 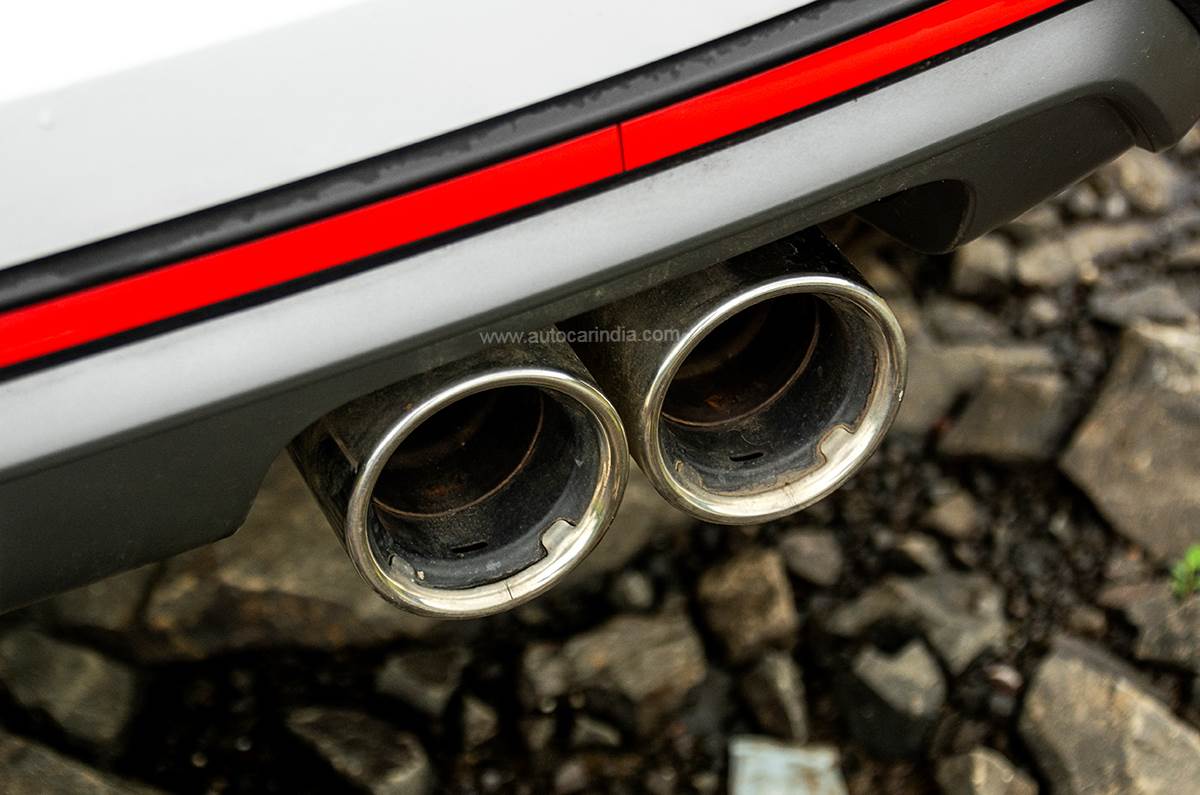 The exhaust has a throaty note but leaves you wanting more as you gain speed.

On the side there are red inserts on the fenders, roof rails and under the doors, and although the size of the wheels has not changed, the design is different. Out back, there’s more red on the bumper, but what steals the show here are the dual chrome exhaust tips. It’s not a major difference overall, and we would have liked more differentiating elements. Still, if you want a little more pop, the N line delivers that.

Inside, as you’d expect, the space remains the same, which isn’t great in the back, but offers a two-step recline for the backrest. The trunk volume is 350 liters. 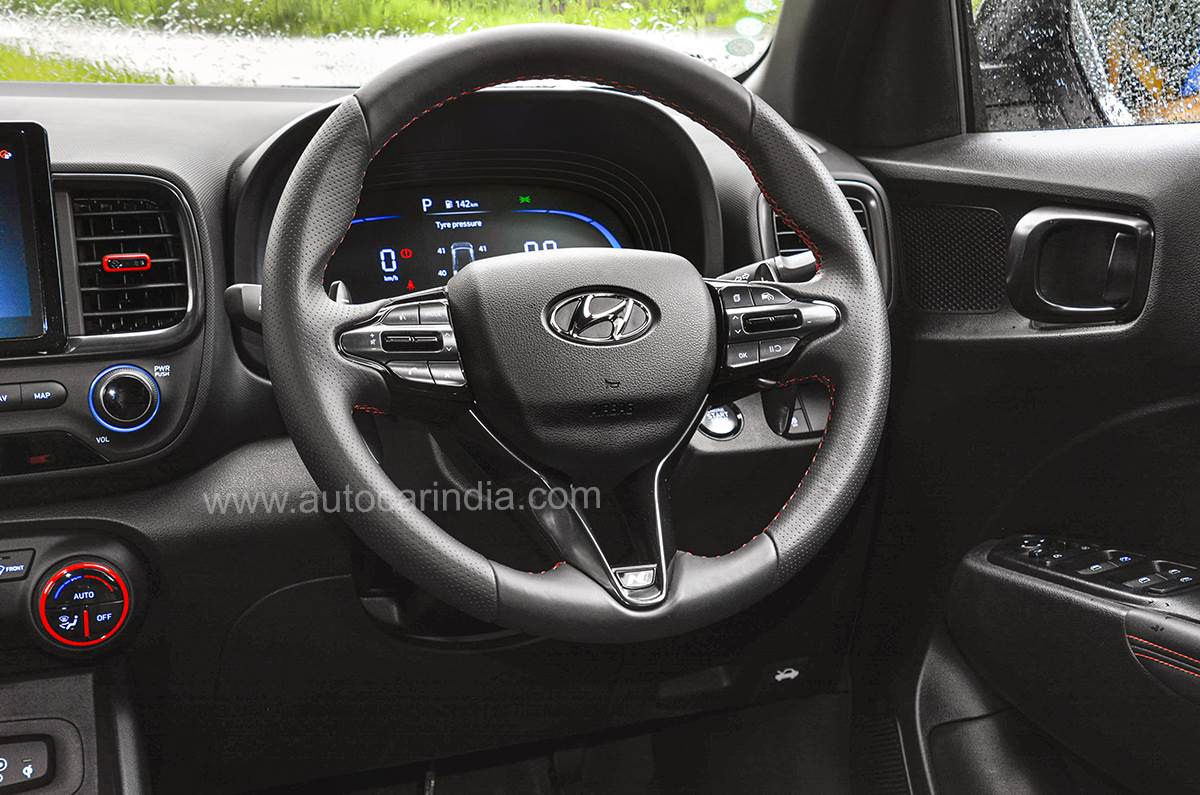 The new three-spoke steering wheel is more comfortable to hold and also has a sporty appeal.

Trim-wise, you get an all-black interior with a good mix of red. There’s red around the buttons, on the air vents and even on the seat piping. There’s also red ambient lighting and it also gets an N-badged shifter. What’s properly new to the Venue N Line is three-spoke steering. It feels better to hold and has a sporty appeal too. The shift paddles have also been blacked out and the digital cluster is similar to the standard Venue.

The talking point though with the features is the inclusion of a dash cam that records footage from inside and outside. It’s a Full HD setup at 30fps, records as soon as the car is turned on and saves it to an SD card; in addition, you can also set it to record while the car is parked. It’s a really handy feature and it’s nice to see it built into the car, like in an accident, or even to prove you didn’t jump a traffic light, that footage is crucial. 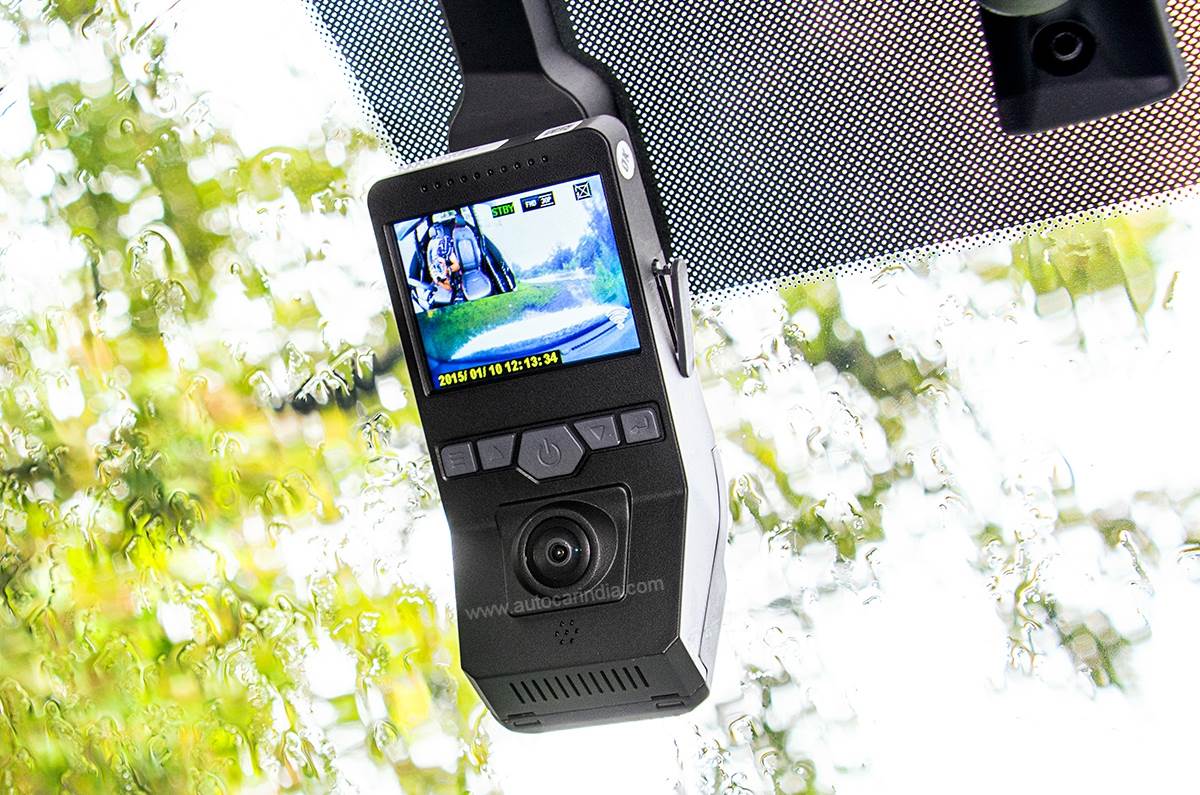 The two-way dash cam can record even when the car is turned off.

Other features include N-line-specific metal pedals, and oddly, the air cleaner appears to have been removed. Still, you get the usual kit like a sunroof, wireless charging, an 8-inch touchscreen with Apple CarPlay and Android Auto, BlueLink connectivity and for rear passengers, two-step tilt on the top N8 variant. The cheaper N6, however, lacks many features such as two-stage reclining rear seat, electrochromic rear-view mirror with SOS switch, side and curtain airbags, dash cam, power driver’s seat, BlueLink connectivity with Alexa and Google support, 60/40 split seats and rear armrest.

Venue N Line is priced between Rs 12.16 lakh to 13.15 lakh. Spec-to-spec, the N6 costs Rs 1.19 lakh more than the S(O), and the N8 is Rs 58,000 more expensive than the top-end SX(O). So it costs a bit more, but has the N Line increased driving pleasure? We would say yes; while a bit more power would have been nice, the N Line is more focused and engaging to drive. Tuning the suspension made it more nimble in corners, and the addition of rear disc brakes dramatically improved braking and control. 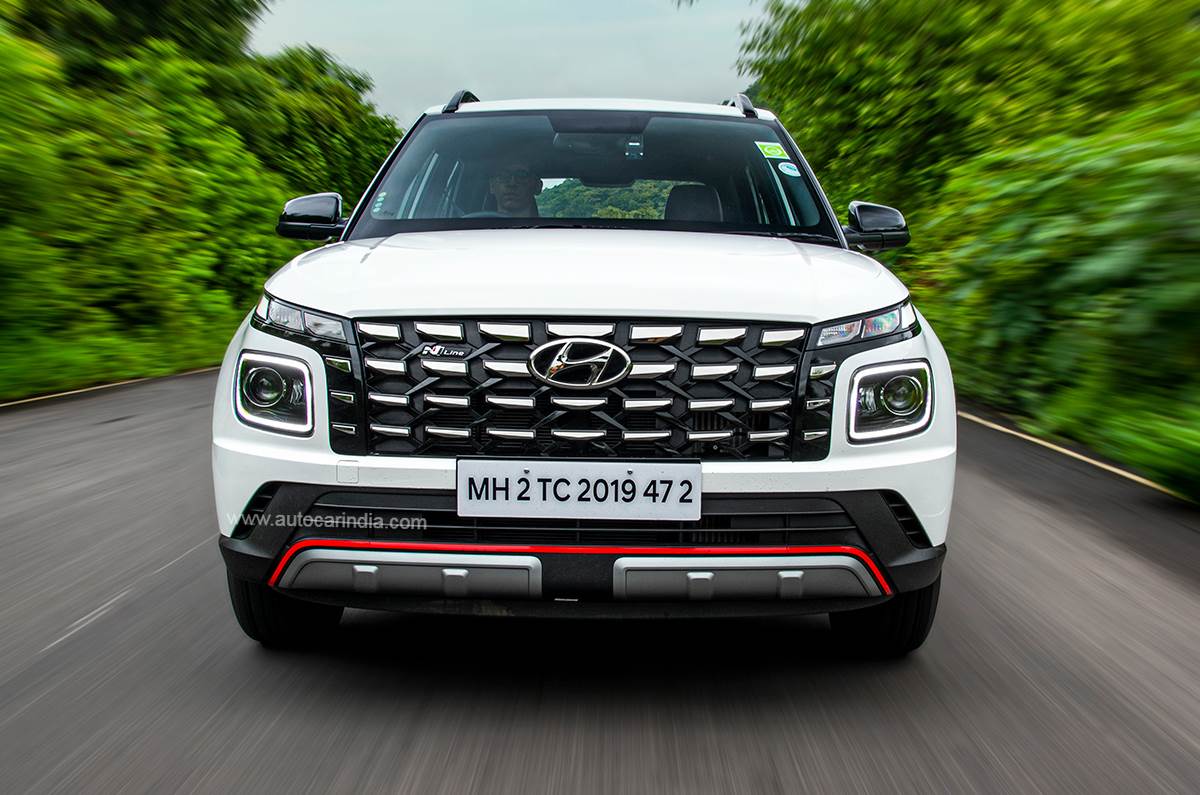 The front bumper has differently shaped air vents compared to the standard Venue.

And, of course, there’s the throaty exhaust note, which, while a bit muted for our tastes, adds aural drama to the driving experience. And then there’s the dash cam and extra sporty trim. Overall, the Venue N Line is an attractive option for those looking for a more exciting ride.