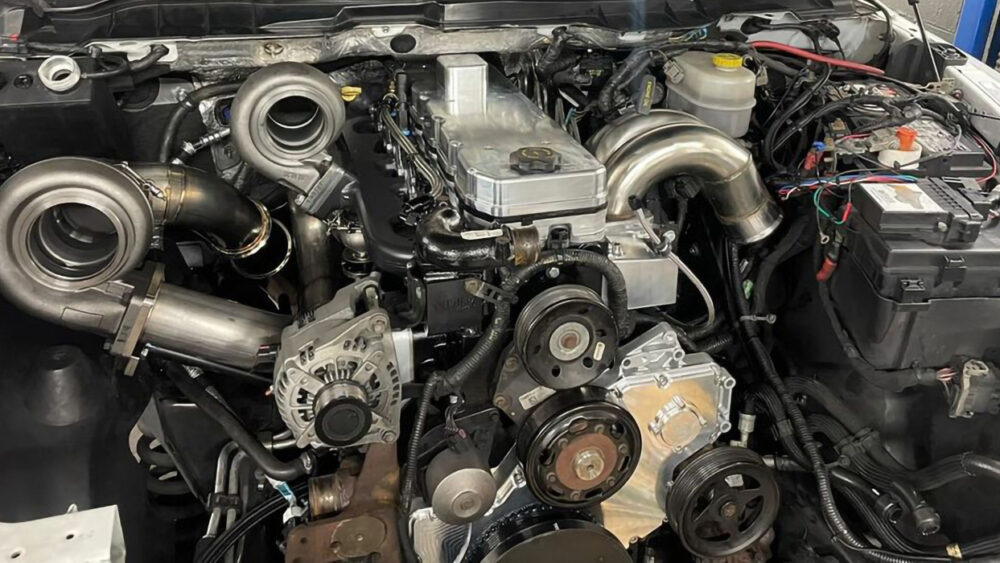 The phrase “more than meets the eye” is something that often comes to mind when considering diesel powersports – to the average person, a 5,000lb truck is much more like a vehicle utility than a racing machine. Even trucks with aggressive wraps and decals get skeptical stares as they roll down the track at breakneck speeds. But even more modest are the trucks that don’t look like performance vehicles at all.

“Sleepers” are more common in the automotive community. Essentially, these are cars that are designed to appear completely stock or modest on the outside while housing performance upgrades under the hood. Every now and then we find a diesel truck with an impressive sleeper build, and today’s diesel of the week is no exception.

Mark Rojee has been working on diesel engines for about seven years at Mahky’s Performance and Tuning. The small, family-run diesel performance and repair shop measures nearly 3,000 square feet, has a four-bay garage, and employs six workers, including five mechanics. His father has owned the workshop for 34 years and Rojee first got into diesel seven years ago. Before that, he spent his childhood riding dirt bikes – like most racers, he was basically born into the performance world.

A few years ago, he bought his first diesel truck: a 2018 Ram 2500. The 4e-gen truck looks humble on the outside, with a factory white paint job and nothing to indicate anything other than a stock truck. But under the hood, Rojee hides a 1,500-horsepower monster that turns his modest workhorse into a racing machine.

The 6.7L Cummins is an Enforcer series engine, built by none other than the guys at D&J Precision Machine. The engine platform has won several Ultimate Callout Challenge competitions. The engine is based on a cast iron block that has been sleeved, ringed, fitted with a deck plate and fitted with an X-beam, cast aluminum pistons and an HD belt. A flat billet lifter cam, Hamilton billet lifters and 7/16-inch-diameter pushrods make up the valve train.

The cylinder head is a stage 3 fire ring with an oversized valve that flows much better than the factory unit thanks to 115 lb valve springs and titanium valve spring retainers. Arp 9/16 inch head studs torqued to 175 ft/lbs. secure the unit to the block.

For forced air, Rojee went with an S400 compound setup that delivers 110 psi of boost to the factory intercooler and then to the engine. The Atmo Charger sports a 91mm forced induction compressor, 104mm turbine and T6 inlet. The smaller unit has a 72mm billet supercharger, 87mm turbine and 1.00 A/R exhaust housing. It uses a single nitrous line going to a single .136 jet on a wide open throttle switch .

An S&S Diesel Motorsport 14mm CP3 was fitted to take care of the 250% set on the injectors, and the common rail system is controlled via EFI Live tuning software. Underneath, the 48re drivetrain was built in-house using mostly Sonnax and Goerend parts.

This summer, Rojee hit his personal best 6.42 seconds in the eighth mile. For a 7,645 lb truck, it can definitely move!

See how amazingly clean this 700,000 mile 7.3″ electric run diesel engine is inside